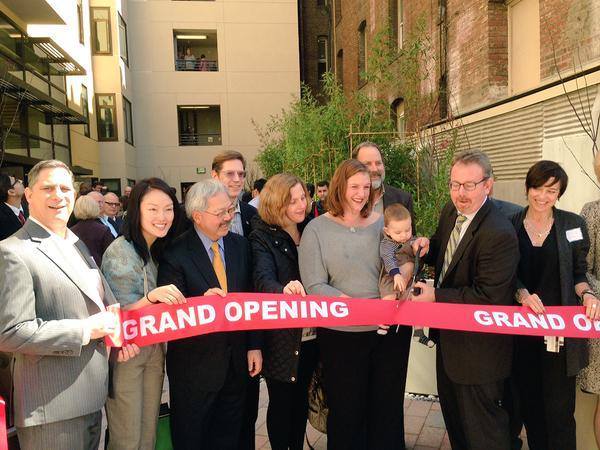 Opening of Mercy Housing's senior housing above St. Anthony's is part of the Tenderloin's ever expanding nonprofit owned housing supply

According to new Rent Board statistics, roughly 40% of all San Francisco eviction notices since 2012 involve no-fault evictions. These numbers reflect both the wave of Ellis Act and Owner Move-In evictions displacing longterm residents and increased attempts to get below-market paying tenants out of their homes for tiny breach of lease violations and other dubious reasons (the stats only cover notices, not successful evictions).

The Rent Board numbers also reveal illuminating information about the Tenderloin. Contrary to what many activists and reporters predicted, Twitter’s arrival in Mid-Market in 2012 had no displacement impacts in the Tenderloin. Since 2012 Tenderloin no-fault evictions comprise only 3% of all evictions, a remarkably low number that is inflated by the Rent Board including higher price areas outside the Tenderloin along Van Ness, Market and Powell Streets in its statistics for the neighborhood.

Even that inflated 3% figure is a tiny fraction of the 15% no-fault evictions in the Tenderloin in 2011 before Twitter and tech’s arrival. It is also less than the average number going back to 1997.

These statistics refute an avalanche of local and national media stories about how Twitter was transforming the Tenderloin into the Twitterloin.  We still await the corrective stories that acknowledge that the many strategies used by Tenderloin activists to prevent displacement actually worked.

Having written a book detailing these strategies and explaining why the Tenderloin avoided the “inevitable” fate of gentrification, The Tenderloin: Sex, Crime and Resistance in the Heart of San Francisco, the new Rent Board stats confirm my perspective. And setting the record straight on the Tenderloin’s success in battling gentrification and displacement is important not just for San Francisco but other cities. “Prevailing wisdom” can deter activism, and believing that “nothing can be done” to stop gentrification deters people from trying.

The chief reason reporters and activists got the Tenderloin’s future wrong is that they relied on gentrification theory over the specific realities of the neighborhood. In other words, they ignored the Tenderloin’s lack of ownership opportunities, high level of nonprofit housing, and primarily SRO and studio apartment housing stock and instead focused on the common theory that working class neighborhoods adjacent to areas of growing affluence inevitably gentrify.

Allowing standard assumptions about neighborhoods to prevail was a common error found by Jane Jacobs when she began examining urban redevelopment plans in the 1950’s. As I describe in my review of Peter Laurence’s wonderful book, Becoming Jane Jacobs, Jacobs was initially supportive of these plans until she saw that their actual implementation failed. The planning and architectural professions remained more loyal to the theory than to the practice, which led to Jacobs’ becoming an urban visionary and revolutionary primarily by paying close attention to how specific neighborhoods worked.

In the case of Twitter and the Tenderloin, those promoting the “imminent gentrification” line seemed unaware of the neighborhood’s longstanding difficulty in attracting business investment.  A neighborhood whose decline began in the late 1950’s and which did not revitalize during the dot com boom or long housing bubble was not going to suddenly become another Hayes Valley because tech companies opened in Mid-Market.

As I explained last March, “the Tenderloin has never been and can never be the Mission.” Cities and neighborhoods face distinct displacement threats, which is why Oakland is not Brooklyn and its Temescal neighborhood is neither Fort Greene nor Park Slope. Hayes Valley and the Mission share some common challenges but the latter has far more space for new development while the former has little nonprofit housing or SROs.

Battling gentrification and displacement requires activists to carefully examine what particular vulnerabilities put their neighborhood at risk. These vulnerabilities must then be countered and dispelled through pro-active action.

That’s what happened in San Francisco’s Tenderloin. This strategy can also work for other at-risk communities.