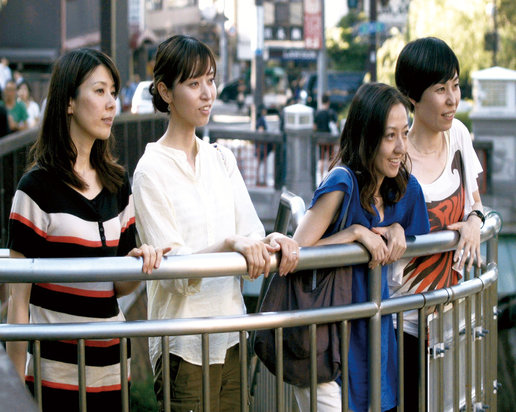 Logan Kiben’s dramatic comedy “Operator” unoriginally concludes that even an empathetic voice recording won’t substitute for contact with a real human being.  Concerns about the commodification of human empathy don’t register on “Operator”’s radar.  Having the emotional well-being of the male IVR programmer character be female characters’ main conversation topic pushes the film into tech-bro wet dream territory.  “Operator” also portrays its female characters’ justifiable anger as castrating and confuses empathy with being an emotional doormat.  Skip this film.

Viewers are introduced to the four leading characters during a fog-ruined day trip.  This quartet of friends consists of: Akari, veteran nurse and unofficial group leader; Fumi, curator for the PORTO event space; and Sakurako and Jun, housewives who have been best friends since grade school.  They all live in the Japanese port city of Kobe.  During that same day trip, Akari, Sakurako, and Jun agree to help Fumi by becoming attendees at artist Ukai’s interactive balance workshop.  Ironically, the women’s attendance at the balance workshop seems to set in motion events that unbalance both the quartet’s personal lives and their mutual friendship.

Hamaguchi skillfully draws on classical music to structure the viewer’s immersion into the quartet’s lives together and separately.  The basic theme of an individual life (e.g. loneliness) is introduced.  Later returns to that theme in the film reveal new details that provide variations and depth helping to increase the viewer’s understanding of a particular woman’s individual life.  For example, Sakurako’s hunger for compliments introduces the theme of her unhappy home life.  Returns to Sakurako’s household show how her husband’s behavior is responsible for her unhappiness.

This formalism may seem to the careless viewer less interesting than the adrenaline of melodrama.  But in understanding the human animal, the emotional sugar rush of exaggerated crises feels inferior to the revelations that “Happy Hour” grows out of apparently trivial or nonsensical events.  Akari’s being allowed to listen to Jun’s guts shows the level of trust and comfort the two women have in each other.  But when Akari later feels Jun has betrayed her trust, the viewer has already been primed to understand Akari’s sense of the depth of that betrayal.

“Happy Hour”’s length works especially well in allowing many dramatic scenes to throw off the sparks of theatrical one-act plays.  Among these standout sequences is a post-reading dinner that turns into a quietly scathing confrontation. What may seem like long rambling scenes actually resembles the methodical excavation of long festering emotional wounds.

Binge watching is considered a normal phenomenon nowadays.  Compared to such viewing marathons, watching “Happy Hour” is not an exorbitant commitment.  In fact, taking time for Hamaguchi’s film resembles immersing oneself in a long satisfying novel.

Those who treat competitiveness as an inherent holy grail get deservedly ridiculed in Athina Rachel Tsangari’s wonderful satire “Chevalier.”  Six well-to-do vacationing Greek men play a game to determine the “best in general” among them.  Yet the contests and evaluations they undertake to answer that question highlight the pettiness of the goal.  Testing each other on speediest cleaning of a ship section or the quality of a sleeping position doesn’t seem that far off from “Survivor”’s TV competitions.

Who knew that daily classroom shootings and even an attempted suicide bombing could be the stuff of gonzo demented comedy?  But Eiichiro Hasumi’s live action manga adaptation “Assassination Classroom” successfully works such insane magic.

Earth is threatened with annihilation in a year’s time by a creature powerful enough to turn Earth’s moon into a permanent crescent.  While humanity struggles to find a way to assassinate the creature, it becomes the new homeroom teacher for Kunugigaoka Junior High School’s Class 3-E.  This class of delinquents, dregs, and other losers of Kunugigaoka has been entrusted with finding a way to kill their teacher.  However, the creature regularly shows he lives up to his name of Koro-sensei (“Unkillable Teacher”).  The students of 3-E begin to love their new teacher.  But they still have to find a way to kill him.

Koro-sensei makes an unforgettable visual impression on the viewer.  Imagine someone who’s a mix of a smiley face gone evil, a college teacher in mortarboard and robes, and a Lovecraftian horror colored a bright yellow all in one figure.  The result is something both friendly and terrifying.

The story’s avoidance of simple good and evil ethics adds to its insane charm.  Saving the Earth from destruction makes the viewer root for Koro-sensei’s death.  Yet this powerful creature has given a life-changing second chance to students society had condemned to the gutter.  Then again, unless Koro-sensei is killed, the 3-E students’ second chance will be a very short one.

The execution of the film’s outlandish premise quells any concerns about plausibility.  Despite the holes regularly punched in the school building by gunfire and other fights, the building still manages to stay usable.  Koro-sensei appears to constantly pull new survival skills out of nowhere.

(“Happy Hour” screens on April 27 at 12:30 P.M.  “Assassination Classroom” screens on April 27 at 10:00 P.M.  Both screenings take place at the Alamo Drafthouse New Mission (2250 Mission Street, SF).  Strand Releasing has picked up “Chevalier” for American distribution.  For further information about these screenings and to obtain advance tickets, go to www.sffs.org . )