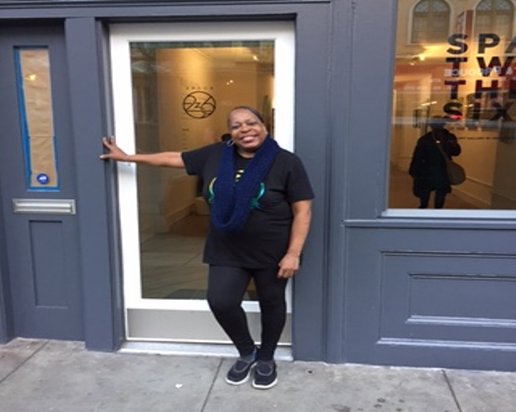 Brenda Washington, a Jefferson Hotel tenant organizer and a key tenant leader in San Francisco’s Tenderloin, will be honored by the San Francisco Board of Supervisors on February 23 as part of Black History Month.

This recognition is well deserved.

The term “leader” is often overused, but Washington is precisely that. Jefferson Hotel tenants at 440 Eddy follow her lead, whether it be on making sure tenant common spaces stay clean or the hotel’s outside planters are watered and free of debris.

Washington promotes positive activity on her block and in the entire Tenderloin. She is at every City Hall hearing impacting the Tenderloin or SRO tenants. Last week she was at the DBI Commission testifying against proposed residential hotel conversions. Washington has led efforts to get more police in the Tenderloin and to ensure that new housing developments bring jobs to neighborhood residents.

Brenda Washington is part of a long tradition of SRO tenant activism in the Tenderloin. As I describe in my book, The Tenderloin: Sex, Crime and Resistance in the Heart of San Francisco, SRO residents since Don Feeser and Win Cottrell in the 1980’s have long led efforts to preserve the neighborhood’s primarily low-income character. SRO tenants have similarly pushed hardest to improve the quality of life in the community. Former TNDC Executive Director Kelly Cullen lived in the Aarti SRO when he came to the Tenderloin and that this experience shaped his years of devotion to the neighborhood.

One reason the Tenderloin’s progress starting in the late 1970’s  stagnated a decade later was that the neighborhood’s SRO tenant leadership had been displaced. Not by speculators, but by the city’s hotline hotel program, which turned Tenderloin SRO’s into quasi homeless shelters.

It was not until the city launched its master leasing program in 1998 (which the Jefferson joined a year later) that longterm tenants like Brenda Washington could return to Tenderloin SRO’s.  And the positive impact of their return is clear from all of the work they have done and are doing to improve the Tenderloin. This includes getting  planters installed in front of SRO’s,  ensuring the streetscapes in front of SRO hotels are safe and clean, pressuring for increased police crackdowns on drug dealing, and supporting a wide range of community-building programs in the Tenderloin.

Brenda Washington is the quintessential community builder. And she is joined by an increasing number of other SRO tenants taking the lead on neighborhood improvements in the Tenderloin.

In addition to her organizing and community building skills (which include her role on the Board of the Tenderloin Museum), Washington has one specialty that sets her apart: she is a master in the fine art of barbecue. People in the Tenderloin love barbecue and Brenda is a legend in the Jefferson based on the opportunities she has had to demonstrate her prowess.

We need to get a place for Brenda to cook her barbecue because lines will go down the block. We thought we had a spot this past summer and all of the Jefferson tenants were disappointed when it fell through. We’ll keep trying.

Brenda’s honoring by Supervisor Jane Kim takes place at City Hall on Tuesday, February 23 at 2:30 pm. If you know Brenda come down to the Board of Supervisors chambers and watch her get honored. She is the last person who ever seeks recognition, which will make celebrating her community service that much more fun.

Randy Shaw is Editor of Beyond Chron and Director of the Tenderloin Housing Clinic, which leases the Jefferson Hotel.