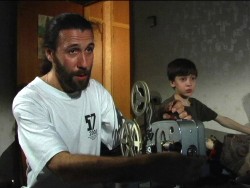 Peter Miller’s documentary “Jews and Baseball: An American Love Story” may primarily survey the many Jewish- Americans whose contributions spurred baseball’s growth. But it’s also one of those rare and enjoyable sports documentaries which prompt the viewer to re-evaluate their own beliefs.

This film challenges the common stereotype that Jews suck at sports. Playing baseball or appreciating baseball provided a medium for Jewish immigrants to assimilate into American culture. The stereotype even fails if applied to professional baseball players.

Through vintage baseball cards and generous period footage, the film introduces the viewer to players ranging from Littman Pike, the first Jewish- American baseball player, to such familiar stars as Sandy Koufax and Shawn Green. Along the way, Miller also mentions such colorful characters as Marv Rosenblatt, the shortest American pitcher, and Mo Berg, ballplayer and near- assassin of physicist Werner Heisenberg.

Jewish-Americans also contributed to baseball culture off the field. A Jewish-American composer wrote baseball’s immortal theme “Take Me Out to the Ball Game.” Marvin Miller’s union work redefined the business relationship between players and team owners.

But the documentary’s greatest value is in its discussion of the conflict between honoring one’s religious beliefs and living in American secular culture. Hank Greenberg and Sandy Koufax’ balancing ballplaying versus religious observance offers a marked contrast to Christian conservatives using religious belief to justify denying LGBTs their constitutional rights. Those conservatives had forefathers in the anti-Semitic sermons of Father Coughlin and those hotel owners refusing to allow Jewish- American players to stay at their hotels.

Miller’s film ultimately hits a cinematic sweet spot between the minutiae of baseball statistics and a broader portrait of Jewish- American contributions to our national pastime. Where else will you find a memorable argument for the philosophical similarities between Judaism and baseball?

Who is Sayed Kashua, this year’s SF Jewish Film Festival Freedom of Expression Award winner? Is he an Israeli government sock puppet or an apologist for Arab violence? Dorit Zimbalist’s documentary portrait “Sayed Kashua — Forever Scared” provides a far different picture. In excerpts from his works and public appearances (including one to a roomful of Israeli cops), Zimbalist shows Kashua mockingly challenging the absurdities of fossilized Israeli and Arab prejudices.

Yet the “Arab Labor” creator’s humor is the hilarity one displays when enduring a state of constant unrelieved stress. He desires both the unfettered exercise of his Israeli citizenship and Israeli restitution to its Arab citizens for stealing their land. A move to Tira, on the other hand, may give Kashua a place near his family. But it also subjects him to excess social pressures to conform.

Zimbalist does capture the long and narrow line Kashua walks between being honest about his observations and reaching audiences resistant to his truths. Yet the film unfortunately fails to reach beyond intellectual curiosity to imbue the *Dancing Arabs* creator’s situation with emotional urgency.

In tracing the brothers’ careers, Mc Neer shows through their words and satirical illustrations that both men were incredibly talented. But their individual personalities sealed their fates. The reporter fearlessly spoke his mind in a regime whose leader disliked “too smart” men. The cartoonist wanted to avoid Giordano Bruno’s fate of being burnt at the stake for his principles.

What price did Efimov pay for his survival? Decades after Stalinism ended, the cartoonist still remained cowed by Stalin’s power. Though McNeer refrains from judging Efimov, a cartoon of Nazis in a circle and a shot of a tellingly placed portrait speak of darker feelings that the cartoonist lacks the will to articulate.

Robin Hessman’s fascinating documentary “My Perestroika” presents personalized stories of the Soviet Union’s collapse through the eyes of five members of the last generation educated under the old Soviet system. The foci of Borya, Olga, Subya, Andrei, and Ruslan’s tales
are not on the politics of communism’s collapse, but on how the effects of perestroika personally played out in their lives. Andrei, for example, never expected to become the successful owner of a men’s clothing store franchise.

Through songs and footage of Soviet schoolchildren and the subjects’ anecdotes, the viewer gets an ambivalent sense of maturing under the Soviet system. Cultural stasis and an indoctrinated party conformity were nothing worthy of pride. Yet in current recessionary America, something must be said for lifetime guaranteed labor and living in an apartment without fearing the Ellis Act’s iron bootheel.

By film’s end, the subjects have become disillusioned by their country’s political changes. While Borya doesn’t regret communism’s fall, the history teacher declines to vote. His faith in the future lies with the younger hacker- savvy generation.

(Kashua will receive the festival’s Freedom Of Expression Award following the San Francisco screening of the first three episodes from “Arab Labor”’s second season. The screening and presentation takes place at the Castro Theatre on July 28, 2010 at 6:30 PM.)