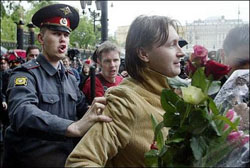 Denied a permit to hold Moscow’s first gay pride parade, gay activists, as an alternate option, tried to place flowers at the Tomb of the Unknown Soldier. They hoped to demonstrate the similarities of the struggle for gay rights with the stand against fascism in World War II.

More than 1,000 Moscow riot police stationed, according to the Moscow Times, near Red Square, were on hand to block lesbian and gay activists who were denied permission to hold that city’s first gay parade.

Arriving at the Alexander Gardens, where the tomb is located, the first activists numbering only about six people, reports indicate, were met by huge numbers of police.

Then, with no police protection, these gay heroes were viciously kicked, punched and repeatedly beaten by more than 100 demonstrators which included skinheads, anti-gay religious and nationalist extremists. Some threw eggs and tomatoes while others yelled “Death to fags!” and “Fags Out of Russia!” “Moscow is not Sodom,” one chanted.

Though not confirmed, one report indicates Michael Mainville, a correspondent for the San Francisco Chronicle, was beaten by a group of youths as he attempted to interview one of the participants.

While giving an interview to television cameras, Volker Beck, a Green Party member of Germany’s Bundestag, was attacked by about 20 youths who left him almost completely covered in his own blood. Volker Eichler, a gay activist from Berlin who witnessed the beating, said police did not intervene. In another reported it was learned police had detained Beck, they said, to prevent him from being further pummeled.

Among information being made available from Moscow, reports indicate dozens of anti-gay youth raced towards the gay and lesbians throwing flares and setting off smoke bombs. As the crowd grew, numerous reports indicate police did little to protect lesbians and gay men in the area.

Yevgenia Debryanskaya, a leader of the lesbian rights movement in Russia since the 1990s, tried to give a speech but was doused with water as protesters laughed at her. She was dragged away by police. Many gay rights supporters attempting to enter Red Square were arrested by police or beaten by protesters.

Among the first to be arrested were Nikolai Alexeyev, an organizer, and Philippe Lasnier, an aide to the mayor of Paris. Alexeyev spent the day in custody; Lasnier was briefly detained.

Alexeyev said Sunday that the event had been a great success, despite the low turnout. “A hundred people were not afraid to go out and protest homophobia and fascism,” he said.
Kirill Frolov, head of the Moscow chapter of the Orthodox Citizens’ Union, passed out flyers saying the bird flu sweeping the globe was God’s punishment for homosexuality.

“This is a perverts’ parade,” said one protester holding an icon of the Madonna. “This is filth, which is forbidden by God. We have to cleanse the world of this filth,” said the woman who gave only her first name, Irina.

“What happened today unfortunately is representative of the non-respect for human rights in Russia. You can’t express your point of view, and you are not protected from extremists,” said French activist Sebastien Maria.

Responsibility for the violence could be attributed to the homophobic comments of Moscow Mayor Yuri Luzhkov. He said gay parades, “may be acceptable for some kind of progressive, in some sense, countries in the West, but it is absolutely unacceptable for Moscow, for Russia.”

“As long as I am mayor, we will not permit these parades,” he said.

Saturday was the 13th anniversary of the decriminalization of homosexuality in Russia, and a number of foreign activists traveled to Moscow this week for an unprecedented forum on gay rights in Russia and what was hoped to be the Russian capital’s first gay and lesbian pride parade. Called “Moscow Pride ’06,” among those featured was Merlin Holland, grandson of Oscar Wilde.

At one location, demonstrators trampled a rainbow-colored ribbon into the ground Conference participants, most of them foreigners, observed the goings-on with concern and confusion. Other anti-gay demonstrators unaware of the symbolism of the rainbow did nothing to several who stood under rainbow-colored umbrellas.

In the contemporary gay liberation movement, few events have produced the level of violence seen this past weekend in Moscow. The actions in Moscow will, no doubt, become the subject of anger and outrage around the world. The riots that many credit with starting the current gay rights movement took place 37 years ago at the Stonewall Inn in New York City.

The many injured last Saturday in Moscow become a stark reminder that the complacency in the struggle for the rights of all people is never over. In fact, without true diligence, what happened in Moscow could easily happen anywhere*even in San Francisco.