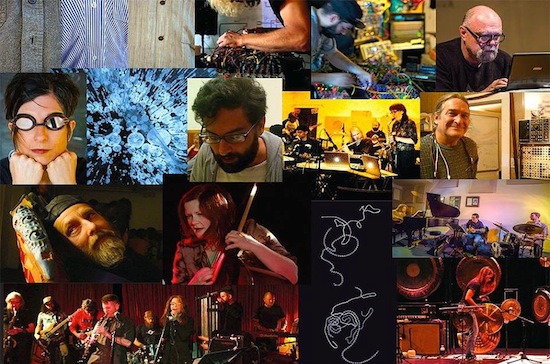 Featured during the annual festival will be groups in electro-acoustic settings, including a night of found-object and amplified gongs and electronics; spontaneous-compositions groups, analog synthesizer improvisations, and kinetic music and video, including a photography exhibit and a screening of the film Noisy People.

Fourteen events—including performances, films, talks, and exhibits—will take place throughout the week of July 26 – August 1, including the traditional opening night Touch the Gear Expo on Sunday, July 26. All evening performances are preceded by a Q&A with the musicians and artists 45 minutes prior to the show.

The Summit will also feature a world premieres by Mika Pontecorvo’s Bridge of Crows, entitled Bedouin Poets of Mars: The Last Poet with guest artist Bob Marsh, and Cheryl E. Leonard’s Threshold, a music and video piece about extreme weather in the Arctic created in collaboration with Australian visual artist Genevieve Swifte.

“The New Music Summit is the San Francisco Bay Area’s creative music festival for some of the most innovative musicians on the scene,” said Outsound Presents founder, Executive Director and curator, Rent Romus. “We feature powerful world premieres, fun and amazing one-of-a-kind performances, and seasoned unsung masters of music and sound art. The Summit is an important cultural asset on the West Coast supporting the local community in an engaging festival environment.”

The Festival begins on Sunday, July 26 at 4pmwith a music talk and demonstration of the Modular Serge Synthesizer, led by cutting-edge artists and electronic music pioneersLX Rudis, Doug Lynner, and Dmitri SFC.

Later in the evening, the popular and free Touch the Gear Expo will take place from 7-9pm.A hands-on experience with sound-producing gear and instruments, Touch the Gear is an interactive, family-friendly event that allows the public to roam among 25-30 musicians and instrument inventors with their various different configurations of “gear”—everything from oscillators and electronics, to planks of wood with strings attached. An avant-garde “Maker’s Faire,” all attendees get to make sound and experience how the instruments work, in an environment that demystifies technology, while inspiring creativity. This event is free to the public.

Monday, July 27 at 7pm, there will be a reception for the photographer Peter B. Kaars, highlighting his photography of the Bay Area creative music scene of the last 15 years, followed by a screening of Tim Perkis’ film, Noisy People. Released in 2007, the film documents and created portraits of the Bay Area experimental musicians. A $6-15 donation is requested for this event.

On Wednesday, July 29 beginning at 8:15 pm, the New Music Summit presents the program Quiet Noise: The Art of Sculpting Sound from Metal, Wood, and Earth with composer and instrument builder Cheryl E. Leonard, performing the world-premiere of Threshold, a music and video piece about extreme weather in the Arctic created in collaboration with Australian visual artist Genevieve Swifte followed by Machine Shop, a live amplified gong experience by percussionist Karen Stackpole and electronic artist Drew Webster. Tickets are $15 General, $12 Student/Senior.

About the Outsound New Music Summit
Since 2002, the Outsound New Music Summit, presented by Outsound Presents, has showcased over 450 innovative and pioneering new music artists and groups from the West Coast, as well as from other parts of the U.S., Europe, Asia and Australia—many of them performing in the Bay Area for the first time. Notable guests have included the legendary Richard Waters, inventor of the waterphone; the Illuminated Corridor Collective, Tom Nunn, Vinny Golia, Bart Hopkin, Kyle Bruckmann and many more. The mission of Outsound Presents is to raise public awareness of the avant-garde, experimental, and sound art. All events and works supported by the organization focus on the creation of experimental, composition, found sound, improvisation, new music, noise, musique concrète, minimalism, invented instruments, genre-bending music, and sound that is sculptural or textural in nature. With continued support from the local community and charitable foundations for its two annual music series, the fledgling community education program OutSpoken and a palette of artist services, Outsound Presents connects audiences to new works and the innovative artists creating them. www.outsound.org

About KFJC 89.7FM
KFJC 89.7FM was founded in 1959, and is and operated as a teaching laboratory for the Fine Arts and Communications Department of Foothill College, located in Los Altos Hills, Calif. KFJC’s commitment to current music is “is to be a conduit for new and interesting audio art and information, especially the sorts that are unavailable elsewhere.” www.kfjc.org

For event details including the list of performers, biographies and information about the 2015 Outsound New Music Summit, visit www.outsound.org/summit. Artists and schedule subject to change.

4pm: A discussion and demo on the use and history with Lx Rudis, Doug Lynner, Dmitri Nikolai Svistula; 7pm: Touch the Gear Expo. A hands-on family-friendly expo for all ages for new and experimental music gear. FREE.