The 2014 Sinquefield Cup is the highest-rated tournament in the history of chess, bringing six of the world’s top-nine Grandmasters together at the Chess Club and Scholastic Center of Saint Louis. Last year, the inaugural super-tournament thrilled spectators as the strongest chess competition ever held on U.S. soil. For its 2014 encore, which began on August 27th and will conclude on September 7, the tournament will be the strongest ever held on earth, its six players averaging a historical peak FIDE rating of 2802.
World Champion Magnus Carlsen, winner of the 2013 Sinquefield Cup, will return to defend his title against an expanded field. This year’s prestigious event will award $100,000 to its winner, part of a $315,000 total prize fund. Returning with Carlsen is Armenia’s Levon Aronian and the United States’ Hikaru Nakamura, respectively the World’s No. 2 and No. 5 players. New challengers to the Sinquefield Cup include Italy’s Fabiano Caruana, Bulgaria’s Veselin Topalov and France’s Maxime Vachier-Lagrave.

Australian Grandmaster Ian Rogers has been following and reporting on the games, now in its second round. “Grandmaster Fabiano Caruana combined extraordinary opening preparation with accurate calculation to win his second consecutive game at the 2014 Sinquefield Cup, leaving the rest of the highest-rated field in history snapping at his heels.

Caruana may have been surprised by Vachier-Lagrave’s Caro-Kann Defense, though he used the chance to employ some preparation done with his second, Vladimir Chuchelov, a few months ago — readying for a game against Azeri GM Shakhriyar Mamedyarov.

With 5…c5 and 6…Qb6, Vachier-Lagrave ventured into a super-sharp line of the Short Variation, but Caruana’s 15.g4!?, followed by the equally remarkable 17.Rf2!, was new and unexpected. Vachier-Lagrave began burning time, falling an hour behind on the clock, though his reaction was adequate — until 17…Nh6. Now Caruana was on his own, spending 13 minutes calculating through complications to find the only winning response: 18.Bd3! 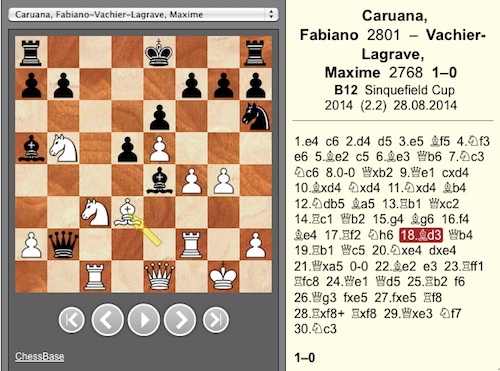 The rest of the game was pure suffering for Vachier-Lagrave, short of time and presented with a variety of losing options. The Frenchman continued, despite being down a piece, but after 30 moves he had nothing for the lost material and resigned.

The game of the day was expected to be GM Hikaru Nakamura’s attempt to secure his first career victory against GM Magnus Carlsen. Nakamura had gone close to knocking over the World Champion with the White pieces twice already in 2014, but Carlsen had turned the tables and won both times.

Nakamura’s Spanish Opening was met by the surprising 3…g6 — a move which Nakamura himself had used to beat then-World Champion Viswanathan Anand in 2012. The American reacted along classical lines, leading the game into positions resembling a King’s Indian Defence, though without a key pair of bishops.

Carlsen surprised both Nakamura and the commentators with the unusual idea 14…c6, playing on the side of the board where Nakamura was attacking. Nakamura’s reaction led to a roughly equal position before Carlsen lashed out with 18…Nh5!!?, sacrificing one and possibly two pawns.

With 21.f6 and 24.Qb1! — a move Carlsen had missed — Nakamura maintained the balance, and soon the World Champion was forced to sacrifice a bishop to achieve perpetual check.

The result was reasonably satisfactory for both players: Carlsen has survived his first two games with the Black pieces and will benefit with the first move in five of his next eight games, while Nakamura has safely negotiated games against the tournament’s two highest-rated players.

GM Levon Aronian briefly regained his world number two ranking — briefly being for about two minutes, until Caruana earned his second victory —  after winning a game against GM Veselin Topalov that looked almost hopeless for the Armenian after just 15 moves.

Playing White, Aronian faced Topalov’s Slav with a well-known plan, but 9…Ne4!? sent him into a death spiral. The World No. 2 had spent only seven minutes before playing into a forced sequence, a series that ended with Aronian staring at 14…Bxd4! in disgust.

Aronian found a way to play on, sacrificing the exchange, and Topalov continued to allow counterplay. After black’s disastrous decision to castle queenside (instead of kingside), Aronian believed that he was close to winning, pointing out the cute variation 23…Kb7 24.Bxc6+! Kxc6 25.Qg2+ with a decisive attack.

Aronian admitted luck after he demonstrated the game to a crowd in the World Chess Hall of Fame but, lucky or not, the Armenian has moved into second place in the tournament, half a point behind Caruana. Topalov, meanwhile, is languishing on 0/2, blaming calculation errors for ruining decent positions against both Caruana and Aronian…”

The games can be watched live here: http://uschesschamps.com/live