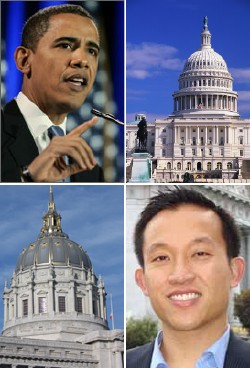 2008 was the Year of Change – when voters ushered in a new progressive era. But a year later, health care has been hijacked by extortionists – just so we can “cut a deal” to get 60 U.S. Senators. In Sacramento, a back-room state budget deal likewise sold progressives down the river. And in San Francisco, the City and Muni budgets were also made behind closed doors – letting the powerful still call the shots. We can’t elect candidates who promise “change” – unless it also comes with a public and transparent decision-making process.

Barack Obama always said “change” would only come if we demand it. His campaign was inspiring because he said it was more than about himself. Like FDR told activists in 1933 to “make me do it,” Obama would keep his volunteers engaged after the election – and would mobilize the base to help him, and make him pass a successful progressive agenda.

But we never had those health care negotiations on C-SPAN. If we’d had, the grassroots could have followed what was going on and played a meaningful role. Instead, Obama ignored the lessons of community organizing by letting the process play itself out the old Washington way – behind closed doors, where private insurance lobbyists have undue influence.

I don’t recall how or when single-payer was taken “off the table” – except that Senator Max Baucus said it was. Without single payer, progressives focused on the public option – which although a compromise, could have held insurance companies accountable. Everyone knew it was tough and compromise would happen, but we were supposed to be part of that decision.

And there was no way for the grassroots to remain engaged in an effective way – because none of the details of “compromise” were vetted in a public forum. We instead had to rely on unsourced rumors in the news and blogs about whether the public option was still alive. Now that it’s dead, we don’t know who killed it – because it was all done behind closed doors.

Consider what Obama told the San Francisco Chronicle back in January 2008 before the California primary. After promising to put health care talks on C-SPAN, he explained that it “builds accountability in the system. Now that Congressman is put on the spot. I would not underestimate the degree to which shame is a healthy emotion, and that you can shame Congress into doing the right thing if people know what’s going on.”

Instead, Max Baucus wasted everyone’s time by drafting a “bi-partisan compromise” that even the Republican Senators he handpicked opposed. Then, Harry Reid convened a “Gang of Ten” Democrats (5 progressives and 5 conservatives) to craft something that could get 60 votes. That’s how we got the Medicare compromise, but Joe Lieberman and Ben Nelson – who were in the Gang of Ten – backstabbed everyone by opposing it. Incredibly, the White House then pressured Reid to cave into Lieberman’s tantrum.

What should they have done? Call their bluff. Over 51 Senate Democrats support the public option, so bring it to the Senate floor – and force Lieberman, Ben Nelson, Mary Landrieu and Blanche Lincoln to filibuster it in broad daylight with Republicans. Let the public see who’s obstructing change, and who should be blamed for it. As long as Reid remains obsessed with getting 60 votes, these “Democrats” evade the responsibility of ever having to cast a “no” vote. And of course, the insurance companies laugh all the way to the bank.

We all know the problem in Sacramento. California is a very blue state – so Democrats have permanent control of the legislature, but not enough to have the two-thirds required to pass a budget. So the Republicans (who are more right-wing than Republicans in any other state) hold the budget hostage by refusing to vote for a single tax increase, even if the state has to make unconscionable budget cuts. They have nothing to lose, and don’t get held accountable – because they are “the minority party” so don’t run the legislature.

But Arnold Schwarzenegger doesn’t help things, and inevitably the budget gets crafted by the “Big Five” – an extra-legal group that includes the Governor, Assembly Speaker, State Senate President and Minority Leaders in each house. Democrats are outnumbered three-to-two, and none of their meetings are public. Republicans won’t support any taxes at all, and don’t care if the state falls off a cliff. As a result, we get the kind of budget that gets worse every year – and we don’t know why particular concessions were made.

Even worse, Democrats consistently get the blame – because virtually every legislator feels compelled to vote for the budget. Meanwhile, most Republicans still vote “no.”

I spent a lot of time this year at City Hall on budget matters – and nothing convinced me more about the folly of back-room deals. Progressives have a majority on the Board of Supervisors, and if they stick together – while building bridges with “swing votes” like Sophie Maxwell and Bevan Dufty – can challenge a Mayor who has been disengaged, unwilling to work with progressives and dead-wrong on the City’s budget priorities.

Board President David Chiu’s performance at the May 6th Budget & Finance Committee was admirable, and showed the value of public meetings. After grilling MTA Chief Nat Ford about the Muni budget, he made it clear that the Supervisors had seven votes to stop fare hikes and service cuts. The mistake he made was to think the Mayor would negotiate in good faith.

One week later, the hope and promise that came out of that meeting was gone – with a backroom deal that barely improved the awful MTA budget. Newsom got Chiu to go along based on a manufactured threat, and it didn’t help that Chiu was the lone progressive negotiating in the room. John Avalos tried to salvage the situation, but by then it was too late. An agreement had been reached.

When the Board tackled the City budget in June – combing through Mayor Newsom’s awful proposal – I expected the Supervisors to make substantive changes at the Budget Committee, using the spotlight of a public meeting to amend the budget. And for a while, they were on the right track by taking the symbolic (but unprecedented) step of tinkering with the Interim Budget. But with notable exceptions, little was changed in those Committee meetings to the Mayor’s proposal.

On July 1st, John Avalos and David Chiu concluded marathon budget negotiations with the Mayor’s Office – all behind closed doors. The Budget Committee even started 10½ hours past schedule, because everyone was waiting for the deal. When we learned all the details, it fell short of where we should have been. Crucial programs were saved, but the Mayor’s Office still had five press secretaries – although a majority of Supervisors would surely vote to cut them. But rather than do just that in a public meeting, it died a quiet death in Room 200.

It’s hard being a progressive – at the federal, state or local level – because you’re always fighting. You were elected to bring social change, but our system of government allows the powerful to maintain a status quo. That’s why it’s so important to push for an open and transparent process – to maximize public accountability when politicians undercut change. If these decisions and votes are made out of the open, progressive officials can get more help from the media and grassroots activists to achieve the change that we need.

2008 was the Year of Change, when America elected Barack Obama and expanded the Democratic majorities in Congress. We did not elect Olympia Snowe, Joe Lieberman and Ben Nelson (none of whom were elected last year) to dictate our health care policy.

California is a deep blue state, but we allow right-wing politicians who act more like Teabaggers than public servants to decide our budget. And San Franciscans last year voted to keep a progressive Board of Supervisors, not to let the Mayor undercut them.

But when deals are made behind closed doors, progressives lose the levers of influence. 2009 was the year that backroom deals sank change. In 2010, it’s time to let the sun shine in.