20 years of ACTing UP 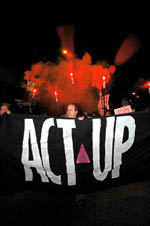 Under a banner of “Welcome to the AIDS Eviction Capital of the World,” a small but enthusiastic group of about 70 activists marched from 18th and Castro to the site of Caldwell Banker a block away to draw attention to the gentrification of the world’s most infamous queer neighborhood. That gentrification has resulted in countless evictions of long-term tenants with AIDS and the pricing out of community nonprofits.

The March 29 demonstration and die-in in front of Caldwell’s was part of San Francisco’s commemoration of the 20th anniversary of the formation of ACT UP (AIDS Coalition to Unleash Power), the leading AIDS activist group in the late 80s and early 90s. The commemoration was organized by the newly formed ACT UP/Bay Area and the veteran radical group Gay Shame.

Meanwhile, in New York City, 500-1,000 protesters marched to Wall Street to call for universal healthcare. About 25 people were arrested at the infamous golden bull statue. No one was arrested in San Francisco. I spoke at the SF event, calling on queers to take back the Castro from the real-estate interests that have raped and pillaged it for decades.

The first ACT UP was formed in New York City after author/playwright Larry Kramer gave an impassioned speech at the Lesbian and Gay Community Center in the West Village in March 1987 in which he called for a renewed activism to fight AIDS. At the time, then-President Ronald Reagan had already established his legacy of doing nothing about the disease that had already killed thousands in the queer community.

Kramer’s call echoed throughout the world, with ACT UP chapters forming everywhere from New York, San Francisco and Philadelphia to Madrid and Paris. It was the queer community’s second Stonewall. The first, a riot in the West Village in June 1969, produced the gay liberation movement that ignited the 70s. The ACT UP revolution left no stone unturned in challenging medical, legislative and even religious establishments to finally address AIDS.

There’s no doubt that the turnaround in attitudes towards AIDS in America was the direct result of the tireless activism of ACT UP. The group’s actions were well planned and often brilliantly executed. Whether it was disrupting CBS Evening News by walking on the air shouting “Fight AIDS not Arabs” or dressing up as six-foot condoms to greet a Vatican representative, the men and women of ACT UP used their imaginations to create an activism that was as much about fun as it was outrage. Who can forget its ubiquitous slogan, “Silence=Death?” Or its hypnotic chant, “ACT up, fight back, fight AIDS?”

As Larry Kramer said at the recent New York commemoration, it’s time for a new surge of activism, an “ACT UP army.” I couldn’t agree more. But that activism needs to draw the connection between AIDS, universal healthcare and housing because in 2007 a low-income person with AIDS who doesn’t have adequate healthcare and who suddenly loses his housing is more likely to die.

Eviction = Death might be one of the slogans of that new activism. At least here in San Francisco, the undisputed AIDS eviction capital of the world.

Tommi Avicolli Mecca is a radical, southern Italian, working-class queer performer, activist and writer whose work can be seen at www.avicollimecca.com.