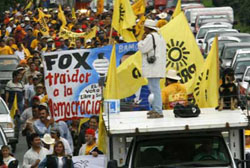 In what is said to be the largest protest in Mexico’s history, an estimated 2.4 million people rallied in downtown Mexico City to protest the questionable presidential election and to demand a recount. The American media blackout of rising demands for a recount in Mexico has created the erroneous conclusion even among progressives that Lopez-Obrador’s attempt to secure a recount lacked mass support. Yesterday’s rally confirmed that the Mexican people are not ready to abandon their commitment to democracy, raising the stakes with one month to go before the election results are officially certified.