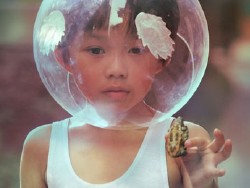 One wishes, though, that something other than Yan Yan Mak and Clement Cheng – Merry-Go-Round had been selected for Opening Night Film. It certainly sounds promising with its story of Eva and Nam, women from two different generations reconciling with the bad decisions of their pasts and wondering whether they can remake their lives. Local residents will appreciate San Francisco footage that doesn’t use Toronto’s streets as a City by the Bay stand-in.

But the Nam character unfortunately drags the film’s momentum. While she is the character most in need of remaking her life, there is nothing in her story that spurs viewer empathy. Her near-fatal drug abuse and slow death from third-stage leukemia inspires feelings that the scriptwriter’s really reaching for dramatic interest. Flipping Nam’s personality from listlessness to an amped-up 11 only makes her character tiresome rather than life-affirming. Even the generally unsympathetic Allen character partially earns viewer interest once one learns why he wants to sell Eva’s herbalist shop.

When one adds soporific English language songs, what keeps Merry-Go-Round from being a complete write-off? Veteran Hong Kong actor (Teddy Robin Kwan) provides an alternately comic and heartfelt performance as cranky cemetery worker Hill. The story of Eva and her first lover displays a passion and tenderness absent from Nam and Allen’s tale. But given that the film’s message seems to be “the past, even with its hardships, is great but the present day sucks,” one should not be surprised.

Viewers’ hopes for at least entertainingly mindless good vs. evil mutant action will be initially disappointed by Benny Chan’s City Under Siege. This X-Men knockoff substitutes a Japanese World War II-era neurotoxin for radiation-altered genes in creating its mutants. But the first 40 minutes of plot set-up turns into a long boring slog whose only entertainment value mainly comes from viewers developing better precognitive powers than Harold Camping. For example, once one police investigator mentions a wedding occurring after the case’s completion, the viewer correctly guesses said nuptuals will never occur.

The film finally takes off with the circus warehouse battle, which involves Aaron Kwok’s comic hero Sunny, the criminal mutant gang, and the police investigators. Other delights soon appear. One can never take superheroes such as the X-Men’s Wolverine seriously again after seeing Sunny use his celebrity to sell shavers and diarrhea medicine. Shu Qi’s Angel evolves from cookie-cutter beautiful love interest to self-sacrificing heroine. Finally, Chan provides all the gratuitous property destruction the viewer can eat.

City Under Siege may be yet another superhero movie. But at least its exciting and thrilling action sequences effectively rebuke Hollywood’s chaos cinema.

Director Law avoids the period film trap of saccharine nostalgia by not minimizing the severity of the daily challenges facing his fictional family. Mrs. Law’s mantra of “Hard times followed by good times” summarizes a philosophy which accepts both a lack of business and success on the athletic field as parts of the same life. But even with that emotional preparation, one can’t avoid having their heart break seeing Desmond’s dreams of happiness with girlfriend Flora get permanently incinerated.

Small period details about life in the hardscrabble neighborhood lend weight to the film’s events. Seeing the street used as a communal dinner hall gives viewer a sense of a place where everyone shares what little they have for the benefit of all. Footage of the real neighborhood seen through Big Ears’ “space helmet” both anchors the viewer in the period and also reminds the viewer of their distance from that time.

Thanks to a strong cast that also includes Hong Kong film veterans Simon Yam and Sandra Ng,Echoes of the Rainbow will bring smiles and tears to fortunate viewers.

Ann Hui’s endearing comedy/drama All About Love brings elegant romanticism to its portrait of a rekindled lesbian relationship. After a 12-year separation, bisexual Macy (Sandra Ng) and lesbian Anita (Vivian Chow) accidentally meet at a pregnancy clinic. The two women slowly begin to fall in love again. But they must also deal with problems resulting from their accidental pregnancies, such as sperm donor stalkers.

Hui refreshingly depicts her film’s gay and lesbian relationships with welcome stability. If her characters encounter relationship problems, these difficulties arise from personal faults and not sexual orientation. For example, Macy’s inability to make an emotional commitment threatens her second chance with her former schoolmate lover.

Ng and Chow make a wonderfully cute couple. Whether cheerfully arguing over whose apartment to stay in or dancing a tango, their performances make the viewer hope their characters don’t get separated again.

Despite its breezy visuals and lovely soundtrack, All About Love raises some serious topics without burying the viewer in didacticism. These subjects include lesbian prejudice against bisexual women, sexism in Hong Kong society, and alternative families’ viability. In the end, Hui’s film becomes another stellar selection.