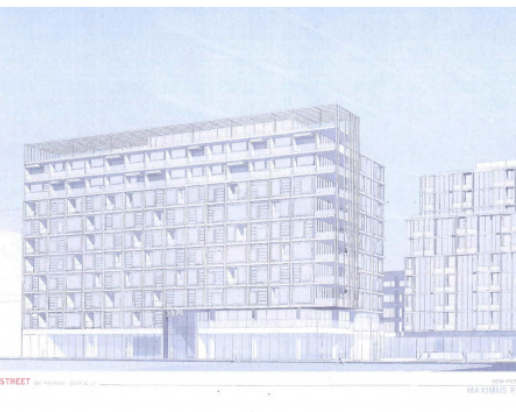 The next great battle over San Francisco development involves a proposed 351 unit project near the 16th and Mission BART station. As reported by Mission Local, the first public hearing on the project occurred this week at the School Board and it brought strong opposition. Concerns were raised about the project’s impact on nearby Marshall Elementary School, as well as the broader question of what it will mean for the neighborhood’s future.

16th and Mission is a test case for San Francisco’s approach to housing development. It incorporates the conflicts that have contributed to the city’s current housing crisis—and most of all, the sharp disagreement over the role new housing development plays in the Mission and other once affordable neighborhoods.

If you believe that San Francisco is best served by building housing on transit corridors, the 351-units planned for 16th and Mission is a dream project. It is adjacent to BART and Mission bus lines, and only a long block from the Valencia street bike lanes.

The project is rental, and so is not the type of upscale ownership housing Mission activists regularly oppose. It also helps clean up the notorious drug-dealer heavy northeast corner of the 16th Street BART station by surrounding it with housing and retail.

351 units are a lot in a city that has had difficulty adding to its housing supply. Mayor Lee wants to add 30,000 units in the next six years, and these type of large projects will be necessary.

Perhaps most importantly, unlike the controversial 8 Washington, this project is consistent with zoning. 8 Washington opponents repeatedly said they would have had no objection to a project on the site consistent with the zoning, and the 16th and Mission project satisfies that concern.

The most obvious ground for opposition is that the project is completely out of scale with the surrounding neighborhood. Two ten story buildings of a total of 351 units will change the feel of the surrounding area. I have no idea why Mission activists did not change the area’s zoning long ago to prevent such a massive project, but this failure should not mean that 351 units should be approved.

Opponents also see the project as “gentrifying” the Mission. But no residential tenants or existing housing is being displaced or demolished. Those with “gentry-type” incomes are unlikely to move into a large apartment building at 16th and Mission. The new units will probably cost less than vacant flats of similar size in the neighborhood.

Marshall School parents and staff are understandably perturbed about the loss of their playground, and the resulting construction noise in replacing it. The developer is going to have to build a far better playground and help fund longterm educational opportunities for the school’s students for this project to get approved.

San Francisco’s elected officials all support “responsible” development. The challenge, of course, is defining it.

Activists struck a deal with Mission Street developers in 2012 that included “a possible $500,000 to fund a plaza on Bartlett Street; a dedication of land to the city so it can build up to 40 units of affordable housing; $1 million to rehabilitate the New Mission Theater, which is considered a city landmark; and about $800,000 in funding to community groups.” It resulted in broad community support for a project raising many of the concerns now at issue at 16th and Mission.

Can a similar community benefits agreement be replicated on what is clearly a more visually impactful project? It certainly seems so. One difference is that some activists see the housing development as entirely negative, while many were excited about the revival of the New Mission Theater. The 350-unit project’s location only two blocks from rapidly gentrifying Valencia Street also raises greater concerns among those who see any new market-rate housing in the Mission as promoting gentrification; in contrast, the 95-unit Mission Street project was in an area that many saw needing revitalization.

I think a deal will eventually be struck, as both sides have too much to lose by the alternative. Delay costs developers dearly, and a ballot measure challenging the project’s approval would push back construction from one to two years even if it failed. Activists will also get far more community benefits through reaching an agreement than if they choose the initiative route.

Mission Must Be Proactive

That the proposed project is consistent with the zoning reminds me of all of the fights over dot-com development in the Mission in the late 1990’s. All of these battles could have been avoided had the Mission followed the Tenderloin’s lead and rezoned the neighborhood to ban non-residential uses above the second floor. Instead, activists eager to preserve “light industrial uses” allowed a loophole that dot-coms rushed through.

I was surprised when first hearing about the 16th Street project that it was consistent with the area zoning, as ten stories and 351 units is clearly out of scale to neighboring buildings. Yet activists failed to proactively downzone the site, and are now forced to argue that the developer should not be able to build per existing zoning.

Given the pressures on the Mission, someone needs to be examining the zoning of every block to avoid repeating the 16th and Mission problem. A more careful rezoning is the best and most proactive strategy for avoiding project by project fights.