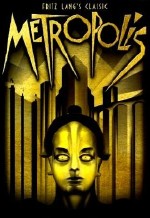 This week, the SF Silent Film Festival will present their 15th annual festival at the Castro Theatre July 15 to 18, expanding the festival from its usual three days to four. The highlight of the festival will be the U.S. premiere of the restored version of Fritz Lang’s Metropolis (1927), with 30 minutes not seen since the 1927 premiere in Berlin. SFSFF artistic director Anita Monga says, “this discovery is one of the most important in silent film history.” The tale of how a film archive in Argentina found the long-sought footage – from one of the major directors of silent film, lost for 70 years – is an astounding story.

Internationally renowned musical star Matti Bye and her Matti Bye Ensemble will play their score for Benjamin Christensen’s incomparable Häxan, a witches’ brew of the scary and darkly humorous. Bye has been a composer and silent film accompanist at the Swedish Film Institute since 1989, and won the 2008 Guldbagge Award (the “Swedish Oscar”) for his score of Jan Troell’s Everlasting Moments, Sweden’s entry to the 2009 Academy Awards.

Every year, the festival showcases a series of short films, presenting them throughout the festival before each feature program. For the 15th annual festival, the imaginative and beautiful films of Georges Méliès, restored by from the Lobster Films collection, will be featured.

This year, the Festival focuses on silent film music with a new program: Variations on a Theme: Musicians on the Craft of Composing and Performing for Silent Film (Saturday, July 17, 12 noon). This event will give the audience the chance to hear from the festival’s extraordinary musicians about what it takes to create a silent film score. Chloe Veltman, regular contributor to the New York Times and producer and host of NPR’s VoiceBox, will moderate. This program is co-presented by City Arts and Lectures and San Francisco Performances.

The festival is also pleased to announce this year’s featured director for the Director’s Pick program – Academy Award-winner Pete Docter. Docter, who directed Pixar hits Monsters, Inc. and Up, presents the comedy shorts program The Big Business of Short, Funny Films (Saturday, July 17, 10:00 am), and will be interviewed onstage by Leonard Maltin at the show. “Pixar’s artists seem to have an affinity for the visual storytelling of the silent era,” says Monga, “and of course, great senses of humor. We’re thrilled to have Docter present some of the funniest moments on film to our audience.”

This year, the popular Amazing Tales from the Archives program, created in 2006 to highlight the importance of film preservation, will have two iterations. The first (Friday, July 16, 11:30 am) –Lost and Found Films from the Silent Era – features Joe Lindner of the Academy Film Archive, who returns with fascinating film fragments from the Academy’s collection, and Paula-Félix Didier and Fernando Peña of the Museo del Cine in Buenos Aires, who will discuss their extraordinary find – the discovery of Fritz Lang’s original version of Metropolis, long thought to be lost.

The festival offers two engrossing presentations for the second Amazing Tales program – First the Bad News … and then the Good! (Sunday, July 18, 10:00 am). Mike Mashon of the Library of Congress will use film clips and slides to reveal the devastating reality of American silent film survival rates. To end on a positive note, Annette Melville of the National Film Preservation Foundation reports on the repatriation U. S. films recently found in foreign film archives. This presentation will include the newly restoreded print of the Mutt and Jeff cartoon On Strike.

Other highlights include Opening Night film The Iron Horse, directed by John Ford and featuring George O’Brien and Madge Bellamy; A Spray of Plum Blossoms (Yi jian mei) a 1931 silent from China, based on Shakespeare’s Two Gentlemen of Verona; Rotaie, a 1929 film from Italy never before seen in the U.S.; The Flying Ace, featuring an all African-American cast and crew, and filmed in Jacksonville, Florida; The Strong Man, directed by Frank Capra and starring Harry Langdon; Diary of a Lost Girl, the second film American actress Louise Brooks made with famed German director G. W. Pabst; William Wyler’s The Shakedown, with James Murray, Barbara Kent, Jack Hanlon; the restored version of Man With a Movie Camera, directed by Dziga Vertov, accompanied by the Alloy Orchestra; The Woman Disputed, with Norma Talmadge and Gilbert Roland; an a truly amazing rediscovery, the closing night film L’heureuse Mort (France, 1924).