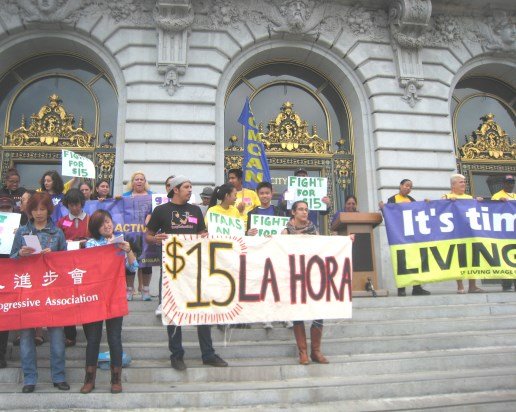 A new report released on August 27 by economists from the University of California, Berkeley, finds that an upcoming San Francisco ballot measure to raise the minimum wage would significantly benefit workers in the city and strengthen the local economy.

The ballot measure, Proposition J, is a consensus arrived at among the Campaign for a Fair Economy (which includes community groups and labor unions), business associations, the Mayor, and all 11 members of the Board of Supervisors. It increases the minimum wage to $15 by 2018, with guaranteed cost-of-living increases. Oakland will also vote this year to raise its minimum wage to $12.25 by 2015.

The study finds that about 142,000 workers, or approximately 23 percent of the San Francisco’s workforce, will receive a raise under the proposed law. Pay for those workers would rise by an average of $2,800 per year, for a total increase in aggregate earnings of $397 million in 2014 dollars by 2018.

San Francisco’s 2003 citywide minimum wage ordinance had little effect on overall employment or hours worked, the research shows, and there is indication that the costs of that minimum-wage law were absorbed through increased worker productivity, decreased turnover and small, one-time increases in restaurant prices. Projections for the proposed law suggest that prices in restaurants would increase by 2.7 percent by 2018.

“A citywide minimum wage can help make the economy more equitable without harming economic growth,” said Michael Reich, director of the UC Berkeley Institute for Research on Labor and Employment and a minimum wage scholar. “That’s more money in low-wage workers’ pockets for a healthier city and a fairer economy.”

“Increasing the minimum wage would help minimize the stress and hardships I encounter on a daily basis right now,” said Juanita Hernandez. “I live in the Mission where rent is high, I work long hours at my two minimum wage jobs and I don’t have a single day off. It’s exhausting and I still struggle to afford my basic necessities. I’m excited that workers will have an opportunity to better our lives this fall by voting to increase the minimum wage to $15.”