13th S.F. DOCUMENTARY FESTIVAL—“FAKE IT SO REAL,” “THE ENGINEER,” AND “JINGLE BELL ROCKS!” 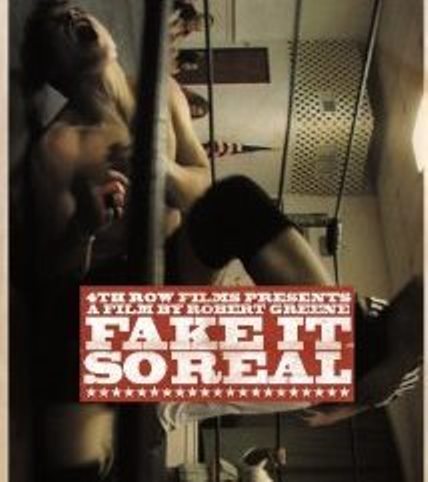 The 13th edition of the San Francisco Documentary Festival (hereafter “DocFest”) inaugurates the DocFest Vanguard Award to honor excellence in documentary film.  Initial recipient hybrid documentarian Robert Greene is represented in part with a mini-retrospective of his previous documentary features.   “Fake It So Real” could describe the director’s mix of cinema verite and dramatic fakery.  The film itself portrays a week following a group of North Carolina independent wrestlers.  It also offers a drily amusing and respectful depiction of low-end aspirational masculinity.

For most of the half-dozen men of the Millennium Wrestling Federation (hereafter “MWF”), the wrestling matches they engage in are purportedly a means of developing enough experience to become professional wrestlers.  Also, these performances continue the supposed storied history of Littleton as a wrestling town.  Yet seeing the relatively tiny size of the MWF’s audiences and the far from professional match venues suggest more than a little self-delusion is at work.  Brandon Weiss, the hardest working MWF member nicknamed “The Natural,” admits his participation is little more than a hobby outside his day job of being a financial analyst.

Weiss’ clearheadedness ironically makes him less interesting as a subject than seeing the MWF members who wrestle to find personal validation.  J. Prep turns the humiliating ownership of a giant posterior created by anti-COPD injections into a wrestling ring asset.  Semi-baby-faced MWF rookie Gabriel uses wrestling as a more constructive alternative to behavior that led an ex-girlfriend to take out a TRO against him.

Greene doesn’t whitewash the reality that his subjects display prejudices that will make more liberal viewers squirm.  Hojo, the MWF’s sole black wrestler, displays an angry black man ring persona and is seen in one match with a lynching rope noose around his neck.  Chris Solar angrily declares he’s not gay while Gabriel is politely reminded that his ring persona ideas emphasize the first syllable of his name a little too heavily.

While the casual bigotries of the film’s subjects may be deplorable, the MWF members’ dedication to their sport is not.  Bleeding heads and loss of finger sensation from matches are treated as a risk of the sport.  But the film’s most telling insight comes from the film subjects’ treatment of a 39-year-old father who wants to join the MWF.

The film’s climactic MWF match becomes in its way another instance of realistic fakery.  Despite the wrestling match’s supposed import, outside the ring the film subjects’ circumstances haven’t really changed.  Greene leaves the viewer to decide whether that result is a mark of tragedy or survival.

By contrast, the bleeding and dismembered corpses Israel Antonio Ticas disinters definitely cannot be called the stuff of faked violence.  Ticas, “The Engineer” who’s the subject of Juan Luis Passarelli and Matthew Charles’ film, regularly encounters these products of gang violence in the course of his duties as El Salvador’s sole criminologist.

The titular nickname comes from Ticas’ civil engineering background, which he applies to locating and digging up the corpses of murder victims from fields and abandoned wells.   Since the abandoned wells can be dozens of meters deep, the work Ticas’ team does resembles an archeological dig at times.  Yet unlike that academic discipline, the information uncovered in these excavations is something neither the gangs nor the government prefers to see unearthed.   Both the warring MS-13 and 18 Street gangs don’t want to see the fears their murders create get dissipated.   The government is invested in the fiction that the murder rate has gone down thanks to their negotiated gang truce.  In reality, while the murder numbers have officially decreased, the disappearances numbers have skyrocketed.

Even if El Salvador’s government was more supportive of Ticas’ work, footage of the country’s city- and countryside makes clear it lacks the budget to do much.  Even its witness protection program depends a lot on the “give us your information and leave the country” model.

Given these hurdles, what keeps this determined man going in his work?  There’s a sense of responsibility to provide closure to the families of the missing.   But there’s also Ticas’ sense of good blasé craziness.  He sleeps in an office whose walls are filled with pictures of mortally injured (or worse) murder victims.  He also thinks nothing of having a meal in a grave being unearthed.

If Ticas doesn’t rise to the eccentricity of an Errol Morris subject, his seemingly lone efforts for justice in his violence-stricken country do merit admiration.

Mitchell Kezin’s semi-unimpressive “Jingle Bell Rocks!” employs the tired premise “Are there other fanatical collectors of Christmas music like him?”   One need not be a Grinch to think “If there weren’t, there wouldn’t be a movie.”

Kezin’s interviewees provide the film’s sparks of interest.  They include Bob Dorough, the “Schoolhouse Rock” creator who got jazz legend Miles Davis to perform on a Christmas song; Run DMC talking about the very urban “Christmas In Hollis”; and The Flaming Lips’ Wayne Coyne recounting the genesis of his science fictional Christmas movie.  John Waters’ interview disappointingly remains PG-rated in even the “Female Trouble” clip of Dawn Davenport’s Christmas meltdown.

Kezin certainly deserves props for unearthing such unexpected musical gems as Clarence Reid’s funky “Winter Man” and Clarence Carter’s bawdy “Back Door Santa.”  But his film will not convince newbies to hunt for Christmas music.