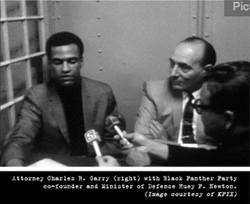 To write about the San Francisco Black Film Festival is not to give hosannas at discovering a previously unknown film festival. This black film showcase has thrived very well for ten years. Writing about the festival, then, needs to be a giving thanks for exposure to films not seen at other local festivals.

“The People’s Advocate: The Life And Times Of Charles R. Garry” reacquaints viewers with one of San Francisco’s most famous (or notorious, depending on your point of view) criminal defense attorneys. This advocate gained fame during the 1960s with his vigorous defenses of various leftist personalities, principally Huey Newton, Bobby Seale, and other members of the Black Panther Party.

Director Hrag Yedalian’s documentary takes a “just the facts” approach to depicting Garry’s life. The viewer is thus treated to period news footage, interviews with Garry’s contemporaries, and a near overuse of title cards. It is suggested regular exposure to anti-Armenian prejudice (Garry was actually Armenian) predisposed the future attorney to use his legal skills on behalf of other discriminated groups.

Former Black Panthers talk about how the attorney understood implicitly the injustices that the black power group opposed. Garry displayed a gift for turning the courtroom into a lectern to show Middle Americans just how clueless they were about black culture. One jaw-dropping anecdote in the film concerns Garry’s questioning potential jurors on their knowledge (if any) of singer James Brown or the song “Papa’s Got A Brand New Bag.”

However, the police outpaced the civilians in the cluelessness race when it came to understanding the rising leftist movements of the 1960s. Having shinier shoes and newer jeans than that worn by the typical anti-war activist is not a recipe for blending unobtrusively into a protest group. Garry successfully exploited police ignorance in the courtroom through such tactics as getting cops on the witness stand to inadvertently damn themselves as rat finks.

The attorney’s empathy for leftists fighting oppression eventually turned out to be a mixed blessing. That talent may have allowed him to vigorously represent controversial leftists such as Los Siete. But it also blinded him to the fatal madness of the Reverend Jim Jones. Garry’s enchantment with the progressive dream offered by Jones’ People’s Temple led to his becoming a public apologist for the Temple. The act of becoming an unwilling presence near the mass Jonestown suicides hit the attorney with the world’s nastiest reality check. Yedalian’s film states the attorney never recovered emotionally from that shock.

The material described above is dramatic and humorous and even tragic. So why does “The People’s Advocate” feel so dull and shallow?

Yedalian makes the mistake of keeping Garry’s life mounted on a pedestal. Treating him as generally flawless undercuts objective assessment of the attorney’s work. The cops who clashed with Garry over the years or less enthusiastic co-workers at Garry’s firm needed acknowledgment in the film. Such acknowledgment need not be agreement with their opposing positions. But even non-flattering appraisals can provide necessary perspective on Garry’s achievements.

How much of the film’s emotional shortcomings derived from its apparent presentational shortcuts (e.g. excess use of title cards)? It’s unclear. But the resulting film does a disservice to an important participant in some of the 1960s’ biggest historical flashpoints.

“Evolution of the Hill”

The titular Hill in “Evolution Of The Hill” turns out to be Brooklyn’s Clinton Hill neighborhood. But the evolutionary force discussed in this short film will be familiar to displaced black San Francisco residents. It’s gentrification. Director Samori Amir Toure allows various Clinton Hill residents a chance to voice their feelings about the steady gentrification of their neighborhood. Toure tries to maintain a balance of voices. But the most memorable pro-gentrification voice belongs to that of the white cookie cutter condo owner.

More importantly, the film’s best line belongs to an anti-gentrification world studies teacher. This word called “gentrification” is nothing less than colonialism under a different name.

“Music is My Life – Politics is My Mistress”

Why wasn’t Oscar Brown, Jr. better known outside of American jazz aficionado circles? His introductory song for the character of Mr. Kicks came with an infectiously bopping beat that could seduce a listener within a couple of minutes. Brown worked with such talents as Abbey Lincoln, Max Roach, and Muhammad Ali. Even in old age, the jazz musician remained a witty and entertaining raconteur who could describe old age as “moving into a really bad neighborhood.” Despite these strengths plus the admiration of Miles Davis and John Coltrane, the Chicago native generally remained more highly regarded by his musical peers than by the American public.

Donnie Betts’ film “Music Is My Life – Politics My Mistress – The Story Of Oscar Brown” successfully works to re-introduce viewers to this singular artist’s music. It also pairs Brown’s music with a warm portrait of a very funny and perceptive man.

Betts eschews a strict chronological structure for his film. Its form is instead that of a well-crafted jazz piece, one drifting back and forth in time following various themes in Brown’s life. For example, the thread tracing Brown’s career in electoral politics turns into deadpan farce. How else could one describe the career of someone who ran at various times on the Communist, Democratic, and Republican campaign tickets?

Brown’s life turns out to be an object lesson in the vagaries of heritage and luck. Two noteworthy Chicago theaters and black neighborhood life proved greater formative influences on the young musician than his father’s law practice. Yet Brown’s political activism turns out to be a spiritual inheritance from his father. The older Brown had been active in the NAACP and a failed effort to make the 49th American state a haven for African Americans. The frustrated promise of Brown’s theatrical career becomes an ironic study in how luck can be an unfaithful lover to the immensely talented.

One is amazed at Brown’s musical alchemy on often depressing realities. His ability to observe and capture just the right detail does not prevent him from simultaneously exercising his gift for creative playfulness. A memorable song-story of a Harlem jitney captures the hilarious unpleasantness of forced seat sharing with a very odiferous homeless man. The Sisyphean battle with continually breeding cockroaches turns into a humorous declaration of endless war.

Brown may have entertained people first. But his art didn’t ignore controversies in the African-American community. His “Freedom Now Suite” collaboration with Roach was one of the first jazz treatments of the civil rights movement. That collaboration ran into creative difficulties, though, when Brown played Martin Luther King to Roach’s Malcolm X. The musical revue “Opportunity Please Knock” was an implicit indictment of American society’s willingness to abandon troubled black youth. That indictment became more pronounced when one knew that Brown’s revue collaborators were the Blackstone Rangers, a notorious Chicago street gang.

Did conservative opposition cripple Brown’s musical career? One does not appear on a Web list of “treasonous” artists by keeping politically quiet. Brown’s own unapologetic smoking of a farm’s worth of marijuana certainly didn’t endear him to the “just say no” types. Yet bad luck and Brown’s own personal failings certainly played their part. Had Brown taken up Burgess Meredith’s suggestion to adopt the lead role in “Kicks & Co.,” perhaps the musician’s theatrical fortunes would have been far more different.

Betts’ film doesn’t ignore Brown’s painful personal flaws. The musician’s infidelities led to the collapse of two marriages and some noticeable resentment among his children. The commercial failure of “Kicks & Co.” becomes more painful when one learns just how much gifted creative talent and financial resources were lost thanks to Brown’s failure of nerve.

In the end, though, Betts’ lively delight of a film will spark renewed interest in a semi-forgotten jazz master. Brown deserves a higher accolade than being the jazz world blend of Ron Sexsmith and Rodney Bingenheimer.

(Readers interested in purchasing copies of “Music Is My Life – Politics My Mistress” are directed to www.musicismylife.info )