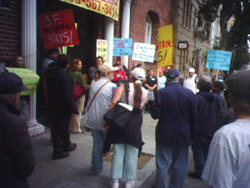 Twenty tenants at 1030 Post Street and nearly a dozen community supporters rallied yesterday to protest KDF Properties, an Orange County-based property management company who bought the 64-unit building and plans to throw out the tenants – or else raise their rents. Ironically, KDF’s scheme involves getting a federal tax exemption under the auspices of “creating” more affordable housing.

“This is nothing but a scam to get rid of rent control,” said Brenda Hunter, a tenant who lives on Social Security and has lived at the building for 2 years. Her current rent is $916/month, but under KDF’s plan to make her building “affordable,” they would raise it to 114% of her monthly income. Therefore, she would have no choice but to move out.

Last spring, KDF applied for a loan under the Low Income Tax Credit Program (LIHTC) – a federal program that gives tax credits for affordable housing developers. In its application, the company assured the State agencies that no tenants would have to move, and under such assurances, the loan was approved. But then the tenants were told that they either had to move out if they were “too wealthy” for the loan program, or else face a stiff rent increase if they are “low-income” and thus could opt into the program. Staying at the current rent levels was not an option, they claimed, because now that the building had a partial government subsidy, it was “exempt” from rent control.

But what exactly is “too wealthy” for KDF’s means-test that would ensure an eviction? For Mohandas Ah, a 77-year old tenant who has lived there since 1979, the program’s calculation gave him a rude awakening. When he sat down to figure out if he qualified for the program, his monthly income was below the maximum cut-off. But he was “too wealthy” and therefore unqualified because he had too much savings after decades of thrift and hard work. “If I had known that saving money over the years would disqualify me,” he exclaimed, “I would have spent it all on horses, whores and hoots!!”

Never mind that the building is already affordable. Like most buildings in San Francisco, the tenants are currently covered by rent control, which keeps annual rent increases to 60% of the Consumer Price Index. If KDF’s plan is allowed to proceed, it could send a dangerous precedent for all apartment buildings in San Francisco – where under the guise of affordable housing, thousands of units would lose their basic protection. “This is KDF’s first project in San Francisco,” said attorney Dean Preston of the Tenderloin Housing Clinic. “We hope it will be the last.”

Already, the commotion of a potential rent hike or eviction has scared off some tenants. Since KDF announced their plans, at least 15 apartments have been vacated – or 25% of the building. One tenant at the rally said that management offered her $2000 to move out – which in today’s rental market won’t get her past a couple months of rent at another apartment.

“I’ve been living in hell since these people took over,” said Barbara Poley, a 19-year tenant. “I want them to leave us all alone.” Or as a group of Latino tenants spoke through an interpreter: “All we want to do is live here, and keep paying our rent. We just want to work hard and live our lives.”