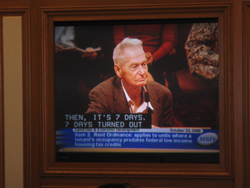 In the latest saga of 1030 Post Street, the tenants have taken their battle to City Hall in an effort to save their homes. KDF, an Orange County-based real estate developer, purchased their building and has tried to raise their rents or evict the tenants – while getting a tax break to “create” affordable housing. The tenants have already protested in front of their building and gone to the Rent Board. Meanwhile, they have undergone a nightmare of threats and intimidation from the management. Yesterday, the tenants went to City Hall to testify in front of the Board of Supervisor’s Committee on Housing and Land Use. Their request was simple — make a small change to the San Francisco Rent Ordinance that will ensure that their units remain protected by rent control.

Under San Francisco law, dwelling units “whose rents are controlled or regulated by any government unit, agency or authority” are not covered by rent control. This was intended to apply to Section 8 housing or other government-regulated rentals that guarantee real affordability. But now KDF argues that because they got an affordable housing tax credit from the federal government, rent control doesn’t apply to 1030 Post Street – even if the existing tenants have lived there for years. Tony Arvidson, who has lived there since 1992, explained that KDF “came in and said that rent control was old-fashioned, and that I should just move out.”

While non-profit housing providers often use the federal tax credit to convert a building into subsidized housing, these developers are subject to strict restrictions from the City on what rents they can charge. Here, KDF is a for-profit housing developer that requested all the tenants to fill out a form disclosing their financial status. If they were “over income,” the tenants were told to move out. If they qualified, their rent would be raised under the new “affordable” rents. For example, Barbara and James Pohley, who have lived there for 19 years and are on Social Security, were told that their rents would be raised from $712-a-month to $1150-a-month.

The tenants have already gone to the Rent Board to argue that their apartments are still covered under rent control, and so any effort to raise their rent or evict them without just cause is illegal. Their attorney, Dean Preston of the Tenderloin Housing Clinic, requested that the landlords hold off on any rent increases or eviction notices until the Rent Board issues a decision as to the building’s rent-controlled status. The landlords refused, and have even stepped up their campaign of intimidation. “I’m from the East Coast,” said tenant Millicent Mays, “and it reminds me of stuff that I would hear about in New York.” Realizing that they could not wait for a favorable decision at the Rent Board, the tenants had to get the Rent Ordinance amended to ensure that they are indeed covered.

Supervisor Aaron Peskin, whose district includes 1030 Post Street, has taken up their cause and introduced legislation at yesterday’s Committee hearing. If passed, the legislation will amend the Rent Ordinance to say that if a landlord obtains a federal low-income housing tax credit for the building, any pre-existing tenancies would be covered by rent control. The legislation does not apply to units whose rents are already “regulated by any use restrictions imposed” by the City, the Redevelopment Agency, or the California Office of Housing and Community Development, but would include all other projects – like 1030 Post Street – where the only rent increase limitation is through the federal low-income housing tax credit. “This is designed to plug a loophole in our Rent Ordinance that has never been exploited until now,” said Peskin.

Matt Franklin, Director of the Mayor’s Office of Housing, was on hand to express support for the legislation. “This provides necessary and effective tenant protections,” said Franklin. Dean Preston, the tenants’ lawyer, was also present, and explained to the Supervisors that the legislation is “very narrowly tailored to only prevent these types of abuses – as opposed to real affordable housing providers.”

The Nightmare at 1030 Post Street is not an isolated incident – underscoring the urgent need for Peskin’s legislation. While everyone believed that this scam has only been tried at one building in San Francisco, Raquel Fox of the Tenderloin Housing Clinic testified that she just heard about another landlord pulling the same trick. At the Martin Luther Towers, located at 1001 Franklin Street, senior citizen tenants are now being told to leave because the owners got a low-income tax credit from the federal government. Under the building’s “affordable” guidelines where only some tenants can qualify, a studio apartment will be renting for up to $1188-a-month. “The tenants were tricked into not seeking outside help sooner,” said Fox.

Because Peskin wished to make further amendments to the legislation, the Committee did not vote yesterday – and it was continued until November 1st. But there was no question that the Supervisors were supportive of the tenants’ cause. Peskin, in particular, minced no words as he expressed disgust with KDF’s attempt to skirt the Rent Ordinance. “You’re going to pay a high price if you continue to mess with people in this room,” he said. “And to Michael Chan of Asian Inc. [a housing developer who assisted KDF in applying for the federal tax credit], I will remember that you aided and abetted them. This scam goes against everything that you purport to stand for.”

EDITOR’S NOTE: Beyond Chron is published by the Tenderloin Housing Clinic, whose attorneys represent the tenants at 1030 Post Street.