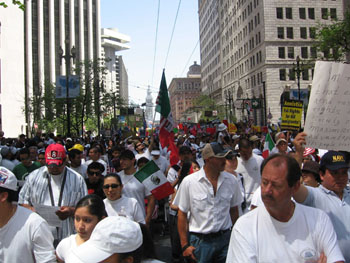 An estimated 100,000 immigrants rights supporters marched down Market Street today in the largest Latino mobilization in Bay Area history. The crowd was at least 80-90% Latino, and most were under 40, sharply contrasting with the large anti-Iraq war protests that disproportionately included older whites.

Marchers came from throughout the Bay Area, and were united in believing that the event marked an historic turning point for the Latino community.

Crowd estimates will inevitably vary for an event whose marchers continued further than the eye, but after speaking to many people, the consensus was that San Francisco saw no less than 75,000 and likely more than 100,000 take to the streets today.

Many of the marchers wore shirts that had “Unidos Estamos” on top, a map of the USA in the middle, and below “Nos Quedamos”—which means “We are united and united we will stand.” On the back, the shirts read in Spanish, “A Day Without Immigrants.”

There were far more children at the march than are customary at such events, reflecting the decision by many to skip school for the historic event. I spoke with several children to find out if they understood what was going on around them, and nearly all clearly did.

Samadhi, a 12-year old girl who attends St. Peters school in San Francisco, said she was there to “stand up for my country.” Her classmate, Tiffany, said she believed she should “fight for what she believes in.”

Ed a 49- year old Pacifica resident, brought his family because his daughter (who wore a Cesar Chavez button) had learned about Rosa Parks and the African-American Civil Rights movement of the 1960’s and he wanted her to learn about fighting for Latino civil rights. Alvaro, a San Francisco resident whose seven family members all attended the march, said it was important to support “amnesty.”

While those negotiating for immigrant legalization are careful to distinguish their demands from “amnesty,” the chant of “amnista” was heard throughout the march. As has been the case in the recent protests across America, the UFW chant of Si Se Puede was the dominant message sounded.

There were very few African-Americans marching (I saw one in over two hours) and only a small sprinkling of Asian-Americans.

The left sectarian groups whose presence has come to dominate anti-war marches were out in force, but their numbers were overwhelmed by the tens of thousands of Latino families.

This was not a march of the usual suspects. And judging from the spirit of the crowd, this march is only the beginning.

Counter-protesters were not in evidence in San Francisco, though the anti-immigrant group America is Full.com chartered a plane to fly its message over the noon rally at the UC Berkeley campus.

Many downtown businesses were closed, testifying to employers recognition that their restaurants could not operate without immigrant labor.

For those unable to take the day off, a rally at the San Francisco Federal Building begins at 5:00pm.