Yo Miles!: Up River 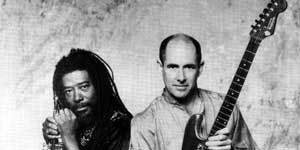 It has been a while since I last saw the Miles Davis inspired group, Yo Miles! at the Fillmore. The brainchild of Bay Area guitarist Henry Kaiser and trumpeter Wadada Leo Smith seemingly play live once a year, and have released 2 CDs, the self-titled “Yo Miles!”, and “Skyward” on the Cuneiform label. Fortunately for me, the incredible duo have recently released a third CD, continuing to cover the Davis music of the mid-1970s. “Up River”, features many of the fine musicians from the “Skyward” sessions, and promises to be their best effort yet.

Yo Miles! was formed in 1998 to explore, expound and expand on Davis’ mid-70s electric music. On “Up River”, Kaiser and Smith have re-assembled the all-star cast from “Skyward”, culled from both the jazz and rock communities. The lineup here includes Smith on trumpet; Kaiser, Mike Keneally and Chris Muir on electric guitars; Michael Manring on bass; Steve Smith on drums; Karl Perazzo on percussion; Greg Osby (alto) and John Tchicai (tenor and soprano) on saxophones; and Tom Coster on keyboards. It also features special guests Zakir Hussain on tabla, Dave Creamer on guitar, and the ROVA Sax Quartet. This set is about equally split between Miles’ compositions and original compositions in the electric Miles style. The group’s studio performance at The Site was recorded live, directly to a stereo DSD (Direct Stream Digital) recorder. The result is a set of two hybrid SACDs (Super Audio CDs, a new technology for enhanced audio quality) playable in either an SACD player or on a standard CD player.

Davis’ musical approach in the 1970s was influential, and Kaiser and Smith have convinced me that not all of its potential has been exhausted. The two discs total over two and a half hours, and as with Davis’s own double record sets like “Bitches Brew”, there’s a lot of extended jams and improvisations. The incredible Zakir Hussain flavors a jam on themes from On the Corner with his tabla and water drums, Kaiser and the other guitarists are possessed by the spirit of Pete Cosey, and Smith, belying his reputation as an abstractionist, captures not just Davis’s easily imitated mid-’70s groove but also his existential aura. Although Steve Smith is no Tony Williams, his drumming is the best I’ve heard in the 20 plus years of seeing him, from “Vital Information”, to ‘Journey”. Alto saxophonist Greg Osby superimposes his own brand of rhythmic complexity (one fully worthy of Wayne Shorter) on the rhythm section’s static vamps every time he steps forward. If Pork Chop Blue Around the Rind proves the wisdom of going outside jazz for material, Osby’s urgent introspection on Vietnam-era Miles is a reminder there’s still a lot to be said for looking within.

On “Thunder & Lightning,” one of two originals, Smith sets up a light, dancing rhythm on the drums with Michael Manring providing the bottom groove on the bass. This is a happy tune, the symmetry of the horns lithe, before Tchicai breaks in, his lines long and loping, a melodic sermon that interjects probes and sharp phrases and flurries that are met with the yowl of Kaiser’s guitar. Kaiser bends his strings and gets into rock terrain with a rhapsodic elation.

The Cuneiform label continues to be one of the most important in the area of avante-garde music, Washington D.C.’s ‘Muffins”, and “Happy The Man”, “The Soft Machine”, and Captain Beefheart’s former bandmates to name a few. “Yo Miles!” will never be just a Miles cover band and rightly so. In a world of samples, “jam-bands” and the like, it is refreshing to hear a collection of musicians that play with the spirit of those Miles Davis incarnations, and add an imprint of their own.