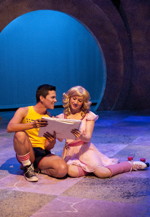 XANADU IS A LOVE STORY, A ROLLER SKATING STORY, AND IT IS FULL OF TERRIFIC SURPRISES

What a wonderful dancing, comedy and Roller skating trip. Wide-eyed lovers (a Muse and a young man) accidentally fall for each other. She is the quirky and exuberant Joie and he is a naïve sexy young man that is just as ditzy as his newfound love. Their mission is to try to resurrect an old Theatre to make magic and Art. But, first they have to deal with, an older cranky landlord that wants to tear the Theatre down. Gee – sounds like San Francisco’s Fox Theatre days. Hello Mr. “C.” There is no denying the extreme comic energy of this cast as they sing the insanely pleasurable, romping musical score (directed by G. Scott Lacy).

The Set looks like crumbling Greek columns with genius lighting. And, it certainly is the only time that I’ve seen raucous roller-skating rides around Greek Treasures. Yes, Xanadu is a recipe, for nutso fun!

One of the actors says to Sonny – “Ummm- BIG HANDS, BIG FEET – that’s the story I want to hear!” Confused? – You’ll figure it out. Of if you’re that naïve – then forget about it.

Briefly: The story is based on the 1980 cult film Xanadu. A beautiful Greek Muse (Clio descends from Mt. Olympus to inspire Sonny who is looking for a space where he can create art and culture. Clio/Kira disguises herself as an Australian roller girl named Kira. But she is forbidden to fall in love with the mortal Sonny. Oooops … too late – she falls into forbidden love. – Kira will love forever. If she becomes mortal by marrying Sonny her life will eventually come to an end. Hard choice to make isn’t it? I think I would chose “immortal.”

Of course, the whole thing is a crazy 1980’s enjoyable spoof. And what is it today? An incredible – 2011 fabulous spoof on the stage.

Perfect endings are hard to come by, but this charming little musical makes it more than perfect.

And for that: Thanks to STEPHANIE TEMPLE for the Great Direction and Choreography.

The book is written by the talented DOUGLAS CARTER BEANE. He’s famed for “As Bees in Honey Drown” – among many others and many awards.

THE FABULOUS MUSIC AND LYRICS ARE BY JEFF LYNNE AND JOHN FARRAR. Thanks for the fun Guys.

YOU ARE ALL HILARIOUS, SHOCKING AND BRAZENLY HONEST. You left me gasping and gagging with laughter!

DIRECT FROM THE GODS IS THE HEAVENLY VOICE OF FRANC D’ AMBROSIO.

Ambrosio is the longest running Phantom on stage. And he has that special knack on how to interpret the lyrics in his special spellbinding way.

The audience was hooked at the Rrazz Room on opening night. He actually made us believe in Christmas music. The audience was hanging on every note. And no wonder … Ambrosio puts a special spell on these songs. That is what makes him a great singer.

There is no doubt about it Franc D’ has one of the most powerful and passionate voice that I have ever heard. His voice range is absolutely amazing on everything from “It’s beginning to Look a lot Like Christmas, Holly Jolly Christmas – Lyric (“For we need A Little Christmas”). What a fun ride it is with “My Favorite things” and so many other special renditions at Christmas time. Even ‘White Christmas” (“Do you hear those Sleigh Bells in the snow”) – really make you believe that you are out in the white stuff.

His glorious, thrilling voice really gets to you with “Oh, Holly Night.” Franc D’ makes us believe this: “From now on your troubles will be miles away.” Always the tearjerker – the song “Oh Danny Boy” – as D’Ambrosio explains – is actually a story about a father and son in Ireland. Heart Tugging? – Bring some hankies. The venue will change from show to show.

Franc D’Ambrosio will perform at the Rrazz Room thru Dec. 18. A little tree told me that Franc’s partner (Skating Champ Brian Boitano) would be in the audience one night over the weekend. Oh, and by the way – Franc also sings his marvelous version of “The Music of the Night” from the Phantom. Believe me – “It’s SOUL-STIRRING!”

Cast of “Bring It On” at Golden Gate Theatre. Photo: Michael Lamont.

BRING IT ON AT THE ORPHEUM THEATRE

For the most part, the songs in this show are awesome if you they all sound alike. I’m sure that most will not remember one tune. However, on the flip side of the show – it is catchy and fun and there is the really exciting acrobatics in the show. One they toss someone up in the air – they really get tossed up high. Yes, it’s scary at times, but they seem to land in someone’s arms all the time, without dropping them.

This show is combination of “West Side Story” (there are two rival high schools. One high school is ritzy the other down so much). There are also elements of “Glee, the musical story on T.V.) There is even hints of “Grease”. Some of the lines are hilarious. One girl at the school across the tracks sez to a Cheerleader: “Oh well, I like myself – I always have.” Here’s another line from the same school: “I’m a Bitch all right – but I’m a bitch that means good!” Many of the boys are great dancers in the poorer school, but they seemed to have learned how to put you hand over body parts. Overheard someone say that they learned that strange movement in a prison. That’s what I heard.

Everyone in the cast is delightful. The music is just so-so – but the actors at both schools are really outstanding. There are also hints of “Hair Spray” – however the language is a lot more “out there”. For instance: “But we are stuck up Bitches.” Here’s another: “Cheerleading is like a spreading virus.” A boy to one of the Cheerleaders sez: When I see a Rainbow – I get a stiffer – just by looking at it!” He said this to a possible date. I guess she got it.

The audience was mostly young. There are wise about everything. The place was crowded on opening night – but I wonder how many Teens are going to shell out money to see it? It’s a party track that is loaded with teenybopper songs. Great dance music though. It keeps you moving. The preppy Cheerleaders do cheer – but mostly they are flying though the air. Well – actually they are tossed into the air – and the strong well-trained boys, catch them before they hit the stage. It really pumps you up.

THE STARS ARE: Taylor Louderman – Adrienne Warren – Jason Gotay – Elle McLemore – Ryann Redmond – Arian DeBose– Gregory Haney – Neil Haskell – Janet Krupin– Kate Rockwell and Nicolas Womack. They all did an amazing job. Lots of talent up there on that stage – lucky for us that they did “Bring It On!”

TRACEY KENT A HIT AT THE FAIRMONT

Maybe you haven’t heard of her before – but you would be amazed at the huge fan base that follows Kent wherever she appears. Yes, they love her. And the reason is – she is very, very unique. Her song styling is very difficult to figure out. With the band behind her – Kent almost talk sings – but like a racing car – she manages to keep up with the band.

Stacy’s band swings and sways along with Jim Tomlinson (Sax) — (Tracey’s Husband). He reminds very much of the Stan Getz blend. But, of course – the main deal is the shimmering, unique styling of Tracey Kent. She handles every piece of music with great skill.

Kent wowed them for two evening shows at the cozy Venetian Room at the Fairmont Hotel. Every song that she sang that evening had a richness of clarity, with her amazingly beautiful singing technique. Both shows sold out. Kent has promised that she will be back again at the Venetian room.

COMING UP ON JAN. 15 2012 will be Tony Award Winner Christine Ebersole (Grey Gardens and 42nd St.) For more info: http://www.bayareacabaret.org/. Or 415-927-4636. Shows sell out fast – so you must also be fast. Executive Producer – Marilyn Levinson has other treasures coming up.