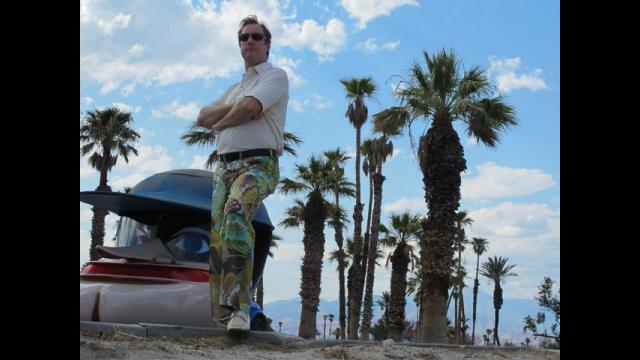 Rodrigo Reyes’ drama “Lupe Under The Sun” gives its titular migrant laborer an identity beyond being more than a pair of strong arms.  Lupe lives a near austere life outside his peach-picking job in California’s Central Valley.  It’s a lonely existence livened by his hanging out drinking beer with friends.   His relationship with lonely fellow migrant Gloria might blossom into something more.

Lupe’s silence in the first half of the film symbolizes the quiet contentment of his life.  He may not be incredibly wealthy or intelligent, but his life’s simplicity is satisfying.  There’s a reliable rhythm in his early rising for work, his regular burrito and beer lunch, and his weekend travels on his adult tricycle.  Wearing a crisp cowboy hat and keeping a neat kitchen provide small signs of pride.

The title character’s coughing up of blood turns out to be an omen.  It physically manifests the hidden emotional illnesses lurking beneath his life.  Gloria’s emotional and physical availability is not reciprocated by him.  His supposed main purpose for being in the US, sending remittances to his family in Mexico, may conceal his emotional estrangement problems.  Reyes’ taciturn lead character may not say how he feels.  But the viewer sees Lupe’s feelings expressed in such sights as a garbage can overflowing with empty beer cans.

This local filmmaker tells Lupe’s story in a satisfying neo-realist style.  The fruit picking job is captured in its repetitive and sweaty tedium.  A visit to the zoo suggests the similarity of Lupe’s existence to that of the caged animals he sees.

The title of Reyes’ quietly tragic film ends up alluding to far more than Lupe’s peach picking job.  “Lupe Under The Sun” delivers a nice metaphorical allusion to the slow shriveling of its title character’s life once hardship strikes.

Ann (Lucy Walters) lives alone in the woods of the American Northeast.  The forest provides a refuge from a worldwide plague that eventually reduces its victims to mindlessly aggressive cannibals.  Ann’s rudimentary existence comes from raiding food from various houses and applying survival lessons from her husband Jason (Shane West).  An accidental encounter with fellow survivors Chris (Adam David Thompson) and his daughter Olivia (Gina Persanti) breaks Ann’s solitude.   But will this break be a temporary occurrence or an opportunity for Ann to move beyond her past traumas?

For much of the film, Blackhurst keeps the plague victims as background threats.  There may be brief out of focus glimpses of the cannibals or audible hunting screams coming from some vague direction.  Ann’s survival tactics, such as regularly covering herself in mud to cover her body odor and her stitching up a wound without benefit of anesthetic, does the satisfying work of underlining the direness of her situation.

The film’s early parts lull the viewer into thinking Ann leads a self-sufficient existence in troubled times.  But both the progression of the flashbacks and the arrival of Chris and Olivia soon show that Ann carries an inner darkness with her wilderness life.

The father and the daughter may have less survival skills than the film’s lead.  But their emotional health helps start pulling Ann away from her personal abyss.

“Here Alone” doesn’t throw away its dramatic buildup when the cannibal threat comes to the forefront.  Instead, its themes of forgiveness and hard decision-making play out in a satisfying suspenseful finale which doesn’t get smothered by violence.

An ethnographic study is how an onscreen title describes Robinson Devor’s fascinating documentary “Pow Wow.”  Yet the “tribes” of Coachella Valley inhabitants seen in the film are less exotic Others than all too human reflections of American character types.  They range from a commercially nationalistic golf cart salesman to Native American residents putting up with sharing this unforgiving landscape with the descendants of their conquerors.

Devor’s camera captures the ripples of division that runs through Coachella Valley life.  Aerial shots tellingly capture sharp visual divides between suburban enclaves and natural desert land.   White residents have not been self-conscious about appropriating such Native American customs as the titular gathering for their own amusement.  Even the different uses of desert aquifers speak to a divergence in relationships to the land between white and Native American residents.

Among the Coachella residents profiled in “Pow Wow,” Devor creates a sense that the Valley’s various “tribes” have very little social interaction with each other.  A prolonged shot of a group of assembled groundskeepers makes the viewer realize that they lack the better off residents’ luxury of staying inside when the temperature goes above 110 degrees Fahrenheit.  Golf carts seem the luxury vehicle of choice for those who have no intention of traveling through rough desert country.

Curiously, none of the film’s interviewees are ever identified immediately onscreen.  But rather than cause the interviewees to blur into an indistinct mass, the film attunes viewers to small clues dropped to identifying these people as individuals, such as an actor/playwright and a sheriff.  Then again, even being enigmatic can be an identifier, as seen in a lingerie and high heels-clad woman checking out the exterior of her decorated helicopter.

Sharing a land haunted by the legend of Willie Boy oddly doesn’t ultimately bind the Coachella Valley’s residents.  Devor’s film repeatedly references this notorious 1909 manhunt, the last posse hunt of its kind.  Willie Boy, a Chemehuevi-Paiute Native American, used his knowledge of the Coachella Desert to elude his pursuers on foot for 500 miles.