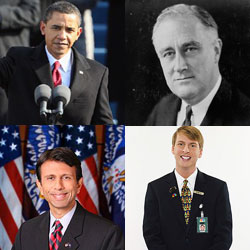 As President Obama follows a $800 billion recovery act by proposing nearly $700 billion for universal health care, and financially ambitious programs for energy independence and education, the United States is experiencing 1935 all over again. That’s the year that followed huge Democratic gains in the 1934 election, and which saw Congress enact the two most significant measures of Roosevelt’s presidency: Social Security and the National Labor Relations Act, which gave federal protection to workers to form unions and engage in collective bargaining. The confident and visionary Obama has left the GOP as befuddled as they were in the 1930’s, with backward-looking Bobbie Jindal embodying their inability to challenge the progressive agenda.

While commentators have linked President Obama to FDR’s first 100 days in office in 1933, 2009 more closely resembles 1935. That was the year that Democrats knew from major back-to- back election victories that the nation hungered for progressive change, and the grassroots base was mobilizing to seize this opportunity.

In his nationwide speech this week, President Obama forcefully declared an end to the era where government was seen as the problem, not part of the solution. The United States has largely been governed by this creed since Ronald Reagan’s election in 1980, but the contrast between the popularity of Obama’s address and the harsh and even mocking reaction to Bobbie Jindal’s anti-big government message confirmed that the Reagan era is over.

CNN’s David Gergen, who worked closely with President Reagan, described Obama’s speech as a combination of Franklin Roosevelt and Lyndon Johnson. Meanwhile, Jindal was compared to the Kenneth Parcell character on 30 Rock.

The New Deal/Great Society is Back

While Obama’s plans for universal health care, alternative energy and education were widely touted during the campaign season, for some it took the reality of the President inserting funding for such programs in his budget to accept that we are in a new era.

And even diehard Obama partisans were likely stunned to learn that he is increasing funding for the U.S. Department of Housing and Urban Development (HUD) by over $7 billion; and devoting $1 billion in funds to the recently passed National Housing Trust Fund. After all, housing didn’t get any real boost during most of the Clinton presidency.

The House passed a bill this week increasing Legal Services funding, long the bane of conservatives, by 11%. And the Kennedy-Hatch National Service Bill that Obama referenced in his speech devotes an estimate $1 billion to young people seeking to make a difference in the world. In other words, Obama is providing the funding for key programs that Bill Clinton refused to allocate. And he is doing so through progressive taxation measures, particularly eliminating the higher tax breaks the wealthy get for their itemized deductions.

One advantage that Roosevelt and Obama had over Clinton is that both presided over a nation angry at Wall Street and distrustful of the corporate interests that have so often denied progressive change. Recent polls show that even Republicans trust Obama more than Wall Street leaders, and Obama Press Secretary Robert Gibbs mockingly announced that the nation was no longer doing what’s best for derivative traders.

The nation’s largest corporations need universal health care for their own economic reasons, while the small business lobbyists who jettisoned the Clinton health plan are representing constituencies on financial life-support. Not since the 1930’s has big business had less capacity to prevent progressive federal actions.

I wonder how many readers really expected President Obama to so quickly and aggressively promote such huge new domestic programs and spending increases. Frankly, most of even his strongest backers likely underestimated his commitment to truly demand and agitate for the dramatic Changes We Need.

Unlike FDR, who was never seen as a progressive leader until he became President, Barack Obama has always been viewed as an ally of the left despite his self-definition as a “centrist.” If advancing the boldest domestic agenda since 1935 makes one a centrist, then we are all centrists now.