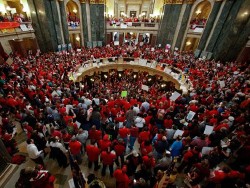 It’s great to see the mass protests in Wisconsin. Labor activists have not been so publicly militant since the 2008 elections, and some see the rallies as part of increasing worker resistance across the globe. But much as I appreciate efforts to link Cairo with Madison, a very troubling message underlies the Wisconsin fight. A Republican Governor is using the 2010 election results as a mandate for attacks on organized labor, a key progressive and Democratic Party constituency. Yet after Democrats won far greater voter support for change in the 2008 national elections, President Obama failed to declare a similar mandate to mobilize public support on behalf of labor unions and other constituencies responsible for the sweeping Democratic victory. Instead, Obama emphasized “bipartisanship” — a foreign concept for single-minded Republicans. Wisconsin again shows that Republican politicians are far more committed to their agendas — and that, unlike their Democratic counterparts, they play to win.

As progressives cheer those fighting to save collective bargaining for Wisconsin’s public employees, let’s recognize the actual terms of the fight. As a result of a single midterm election that brought Republicans control of the Governor’s office and Legislature, public employees will incur steep drops in state contributions to their pensions and health care.

And that’s the best-case outcome.

The worst case is Governor Scott Walker’s proposal to eliminate collective bargaining rights for most public employees, a position for which he claims a voter “mandate.” Yet Madison-based correspondent John Nichols of The Nation told Pacifica’s Democracy Now last week that Walker never promoted this during his fall campaign.

I looked in vain for other media to highlight Nichols’ point, but to no avail. In fact, most of the media accepted Walker’s claim of a mandate to end collective bargaining. Hardball’s Chris Matthews even expressed opposition to, and was shocked by, the very idea that Wisconsin’s public employees were required to pay union dues (so much for MSNBC’s “lean forward” campaign.)

Scott Fitzgerald, Republican majority leader in the Wisconsin State Senate whose brother is speaker of the Assembly, told the New York Times that “Scott Walker and I and my brother Jeff went into this session with the understanding that we had to deliver on campaign promises, that people wanted the Republicans to make change, that the more feathers you ruffle this time, the better you’ll be.”

When is the last time one heard a powerful Democratic politician pledging to ruffle feathers? Hasn’t Fitzgerald heard about the importance of bipartisanship?

Walker, Fitzgerald and other Republicans understand that justifying actions as “mandated” by election results is a powerful frame. And as George W. Bush showed after losing the popular vote and securing the White House solely via judicial fiat in 2000, and then narrowly winning 2004 (by a margin less than Obama’s in 2008), one can use even the most questionable “mandate” to reward political allies and punish opponents.

That’s what the Wisconsin furor is all about. Walker and his crew know that simply cutting compensation to public employees is not enough; they want to weaken public employee unions so that they have fewer resources to support Democrats against Republicans in the 2012 election and beyond.

That’s what is called a game-changer. And it’s what Republican politicians in Ohio, New Jersey and other states are also seeking, which is to use a temporary political edge to permanently weaken the Democratic Party rather than remaining satisfied with smaller reforms.

To use a football analogy: Republicans are throwing deep passes down field while Democrats rely on three yards and a cloud of dust. In a system where election victories routinely shift between parties, this always leaves Republicans with better field position.

The furor over Wisconsin makes it easy to forget the foreseeability of the state fiscal crises now used to justify attacks on public employees. Former House Speaker Nancy Pelosi valiantly fought to include billions more in stimulus funds to help the states, but could not sway Obama or her Senate colleagues.

Why didn’t Obama try to mobilize the public through Organizing for America and use his bully pulpit to get states the funds they would need to prevent these attacks on public employees? Because he did not want a public fight with Republicans over this issue. And while Obama expressed support for unionized public sector employees last week — which excited many progressives — Obama failed to take the preemptive actions necessary to help protect one of the Democratic Party’s most loyal constituencies.

That failure is the signature of the Obama presidency. Elected on a mandate for real change, Obama has refused to “ruffle feathers” over labor law reform, or any other measure that would boost union membership and power. Nor would he claim a public mandate for comprehensive immigration reform, granting immigrant rights supporters only increased deportations and a state-led backlash justified by the federal government’s lack of action.

For those who argue that progressives failed to mount the necessary massive public campaign to pass such measures, consider the absence of any grassroots movement in Wisconsin supporting the denial of public employees collective bargaining rights. If grassroots activism were a prerequisite for Obama’s actions, he would not have unilaterally escalated the war in Afghanistan or frozen federal employees pay for two years.

Obama did claim a mandate for health care reform, but was prepared to give up on the issue in late 2009 until Nancy Pelosi pressured him to act. And the passage of health care reform was not seen as sufficiently important to key Democratic constituencies like young people and racial minorities as to mobilize them to the polls in 2010.

To be fair, some believe Obama did push his 2008 mandate. According to a front-page story in the February 21 New York Times, it was precisely such “overreaching” that led to the “electoral backlash” against Democrats last November.

Really? Millions of Obama voters in 2008 stayed home in 2010 because he went too far delivering on his campaign agenda for change?

That’s hard to believe. But it is consistent with a media message that says the political center is always best, even if it means that the United States has greater income inequality than Egypt, rising numbers living in poverty, and among the highest unemployment rates in the industrial world.

Here’s what the Wisconsin struggle highlights: Republicans nominate true believers, even if this risks losing the general election because they see great upside and little downside — they don’t fear that the winning Democrat will do much to hurt conservative interests.

In contrast, Democrats are so scared that Republican politicians will take truly destructive actions, that they feel bound to support Democratic politicians regardless of how little they deliver to Democratic constituencies. In this mindset, criticizing Obama simply boosts Sarah Palin or Mike Huckabee, and is political folly.

This is why organized labor, immigrant rights groups, the DC-based anti-poverty groups, and other constituencies rarely if ever criticize Obama regardless of his actions. I even heard Howard Dean on MSNBC downplaying Obama’s failure to cut much military spending from the budget, while slashing CDBG, subsidized home heating oil, and community service grants. Dean instead highlighted how much better Obama’s budget was than that of House Republicans.

Democrats will win elections by playing not to lose, but these victories will not change the country’s fundamental direction. And as long as Democrats fail to hold those they elect politically accountable, and refuse to demand that their political leaders “ruffle feathers” in pursuing change, this dynamic will continue.

Let’s hope that Wisconsin is the wake-up call that starts to change this.

Randy Shaw is the author of Beyond the Fields: Cesar Chavez, the UFW and the Struggle for Justice in the 21st Century. Shaw is also the author of The Activist’s Handbook.