Will SF Reject $150 Million for Homeless and Transit? 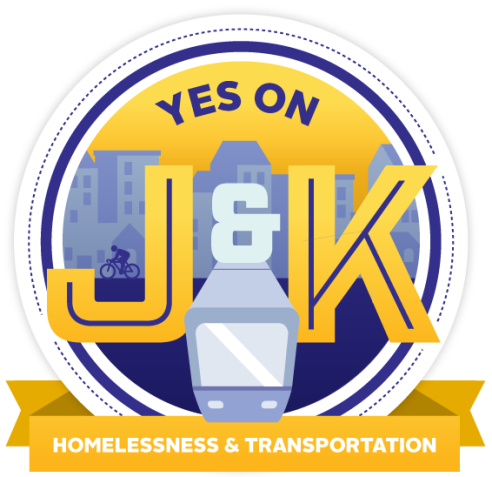 According to recent polls, San Francisco voters are on the way to defeating Props J and K, which would add $50 million annually to address homelessness and $100 million for MUNI, bike and pedestrian safety. Voters strongly favor Prop J but oppose Prop K, whose sales tax hike is a prerequisite for Prop J’s implementation.

Prop J fails if Prop K does not also pass.

In a city where bar drinks routinely go for $12 a pop and more, Prop K means spending only $5 in additional sales taxes for every $1000 in purchases. Most voters wouldn’t even notice.

Yet the measures are currently expected to lose.

Many No on Prop K voters will instead be backing Prop Q, which claims to offer a solution to homelessness that does not require a sales tax hike. With tech moguls footing the bill, Prop Q has phone banks, a field campaign and targets the sector of the homeless population—people living in encampments—that most troubles the public.

Prop Q is bad policy on many levels (I detail its failings in “SF Chronicle Rejects Camping Ban—A Game Changer?” Sept. 15, 2016). But particularly duplicitous is its lack of accompanying funding.

Prop Q makes the closing of encampments conditioned upon the availability of shelter space. It costs money to ensure that such space is always available, but these new expenses are not included in the Prop Q ballot question. In contrast, voters know when looking at Prop K’s ballot question that it involves a sales tax hike.

I expressed concern in June that Prop Q “diverts focus from the real solutions to homelessness.” That’s exactly what happened. With Prop Q having far more resources than J and K, voters are hearing a lot more about the need to pass the politically driven Prop Q than the policy driven Props J and K.

Should J and K lose, Prop Q will be the chief reason.

J and K have also been hurt by the many active San Francisco “No” campaigns this November. This includes No on P and U (opponents argue they stink), No on Q and R, and No on D, H, L and M (which opponents nicknamed  DumbHarmfulLotsofMoney).

SF Magazine wrote a presumably tongue in cheek article (which I refuse to link to) suggesting that a good cure for ballot fatigue was just to vote no on everything.  How funny! Voters wanting to “send a message” about excessive ballot measures by voting “No” on all miss one key point about J and K: new funding measures have to be voted on.

Prop J and K’s providing $100 million annually in new transit, bike lanes and pedestrian safety funds would alone appear to be sufficient to carry it to victory. The SF Bicycle Coalition, Walk SF, Vision Zero SF and other transit oriented groups have proven they can deliver politically and activists are strongly backing Props J and K.

But the reason these groups may not be able to deliver a victory on J and K is twofold.

First, the measure has been too low profile, eclipsed by BART’s $3.5 billion Prop RR.

Second, some voters backing RR may not want to pay for another transit related ballot measure.

Some believed that San Francisco erred in placing its own transit funding measure on the same ballot as Prop RR. But waiting until November 2018 for these desperately needed funds seemed irresponsible, particularly when the large turnout 2016 election cycle seemed to ensure a J and K victory.

Props J and K also faced a political environment expressed by the above August 16 SF Chronicle headline in its story on the city’s $9.6 billion budget. According to reporter Heather Knight, “That’s more than twice the net worth of Donald Trump, according to Forbes. It’s bigger than the budgets of 13 states, including Iowa and Alaska. It’s enough to buy million-dollar homes for every public school teacher, police officer and firefighter working in San Francisco — with a couple billion left over.

But it’s not enough, at least if the November ballot and its roster of revenue measures is any indication. That’s right, San Francisco. The people in charge of our $9.6 billion want more money.”

What a terrible framing of city funding needs.

Knight treats money spent on public services as discretionary, not essential. She claims (tongue in cheek) that San Francisco could be buying houses for all police and fire staff without explaining how these first responders would still draw salaries when funds allocated for their jobs were diverted to housing.

The SF Chronicle endorsed Yes on J and K, but Knight’s arguments resonated with those who always believe that San Francisco has “plenty of money.” These voters believe that $50 million more annually for homeless services and $100 million for transit and street safety improvements provided by J and K can instead readily be found by shifting existing dollars.

That is not the case. If you recognize the folly of such arguments, please be sure to vote Yes on J and K. And make sure your friends and co-workers also understand how important it is for these two measures to pass.

I believe that the onslaught of pro J and K slate cards arriving this week still gives both measures a chance. If you’ve been on the sidelines assuming J and K were sure things, it’s time to start contacting voters.