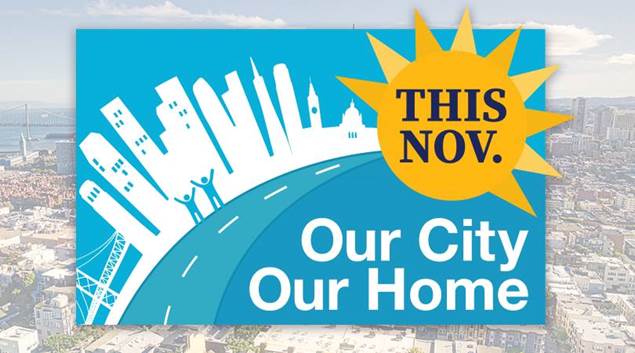 Passing “Our City, Our Home” is Essential

The defeat of Prop D in the June election was the second time in three years that San Francisco voters rejected raising taxes to reduce homelessness. Now the city has another chance to increase homeless funding, as the “Our City, Our Home” ballot initiative has gathered enough signatures to qualify for the November ballot.

As I wrote in support of Props J and K in 2016 and Prop D in June 2018, San Francisco cannot make major inroads in combating homelessness without significant new funds. And that money is not coming from Donald Trump and Ben Carson’s HUD. Nor will California’s Prop 1, the $4 billion Housing Programs and Veterans’ Loans Bond  on this November’s ballot, bring San Francisco enough money to materially reduce homelessness (Prop 1 is also an essential housing measure).

Simply put, San Francisco must pass the Our City, Our Home measure to see fewer people sleeping on its streets.

What the Initiative Does

Here is the text of the initiative. It would tax San Francisco businesses grossing over $50 million and use the money to house at least 4,000 homeless people and  shelter another 1,000. It also funds tenant legal assistance, rent subsidies and intensive mental health and substance abuse services.

The initiative differs from Prop D in focusing all of the money toward homeless persons and very low-income housing. Prop D also included money to help middle-class residents, which had proven the winning strategy for the city’s only successful affordable housing bonds in 1996 and 2015.

But that strategy was premised on needing a 2/3 vote. Our City, Our Home only needs a majority vote because of the California Supreme Court ruling that limited the 2/3 requirement to measures put on the ballot by legislatures or elected officials.

In a city whose homeless problem dominates the news, shouldn’t Our City, Our Home easily achieve a majority vote in November’s large turnout election? The answer is yes—-so long as voters and officials put politics aside and focus on the need for more homeless dollars.

The Politics of Housing Funding

The Coalition on Homelessness (COH), chief backer of Our City, Our Home, did not support Prop D. Nor did any of the “progressive” supervisors, all of whom are likely to endorse the new initiative.

As I previously described, Prop D was not backed by many “progressives” because they did not want to associate with a cause led by Supervisor Safai and mayoral candidate London Breed. Some argued that a better measure was in the works for November, though at the time Our City, Our Home was far from collecting the necessary signatures (some also claimed to oppose Prop D because it included a “poison pill,” ignoring rival Prop C’s own poison pill).

In any case, the bottom line is this: some backers of Prop D may feel that since the COH and other groups behind Our City, Our Home did not support the Safai-Breed measure, that they have no obligation to  support the November initiative.

That line of reasoning is wrong. It must be abandoned. What’s past is past. Whatever differences people, politicians or groups have with the COH, they need to evaluate Our City, Our Home solely on the merits.

I joined Paul Boden, Greg Francis, Joe Wilson and others in forming the COH in 1987. I got the group its first office space in our building at 126 Hyde. I’ve since disagreed with their positions more often than not, particularly over Care Not Cash and the master leasing program.

But past or current disagreements with the COH are irrelevant. On the merits, Our City, Our Home provides essential funding for San Francisco to meaningfully reduce homelessness.  Defeating the initiative only ensures that  the city’s homeless problem stays the same or gets worse.

First, some believe that after Prop C just raised the gross receipts tax on businesses that this measure will hurt the city’s economy. Second, some feel that it preempts a more comprehensive affordable housing funding measure as reflected in Prop D.

On the economy, tourism, the city’s core industry, will be helped by the initiative’s getting homeless people into shelters and housing and off the streets. And with Facebook and other mega-corporations taking more and more office space, it is hard to see the gross receipts tax driving such businesses out of the city (unlike Prop C, the new measure does not tax commercial rents).

As for Our City, Our Home’s exclusive focus on the homeless and very low income, the city’s homeless crisis warrants this targeted assistance. Passage of the initiative would neither preclude passage of a broader affordable housing bond in 2019 or 2020 nor reduce its chances of winning.

Not since Care Not Cash has San Francisco seen a meaningful  influx of new homeless dollars. San Francisco voters need to pass  Our City, Our Home.

Randy Shaw is Editor of Beyond Chron. He discusses the need for cities to provide more housing for all income levels in his upcoming book from UC Press, Generation Priced Out: Who Will Live in the New Urban America.