Who Will Replace Kim in D6? 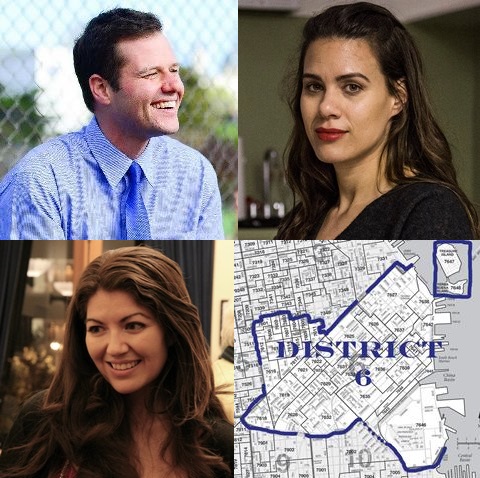 The election to replace Jane Kim as D6 supervisor is over a year away, but after Joe Fitz Rodriquez covered Sonja Trauss’ candidacy last week it became clear there is lots of interest in this race. I see a three strong candidates, giving D6 voters a clear choice in November 2018.

District 6 has only had two open races, in 2000 and 2010. In both cases the candidate backed by the progressive establishment lost.

In 2000, Tom Ammiano, Art Agnos, the Sierra Club, the SF Bike Coalition, and SF Tomorrow all endorsed Beryl Magilavy for D6 Supervisor. Chris Daly, whose base was with SRO tenants, easily won.

In 2010, the progressive-controlled San Francisco Democratic Party chaired by Aaron Peskin backed Deborah Walker in D6. So did the San Francisco Labor Council. Bay Guardian editor Tim Redmond used the former weekly to relentlessly attack Kim. When his attempts to clear the field for Walker failed, the Bay Guardian sought to define Jane Kim as a “moderate.”

The 2000 and 2010 races basically came down to a choice between the two leading candidates. In 2018, there may be three.

Here, in alphabetical order, is my early assessment of their strengths and vulnerabilities.

Sources say Angulo is seriously considering a run. Her entry would certainly give D6 voters a broader choice.

Angulo’s key strength is that she has already delivered for D6 residents in her role as an aide to Kim and Peskin. Sunny is a very involved aide. She has dealt directly on key legislation of interest to core D6 constituencies like tenants. She would have the largest volunteer grassroots field campaign of any candidate in the race.

Voters who really like Kim or Peskin will go heavily for Angulo.  I assume there would be a mailing with Kim and Peskin urging voters to back Sunny—-that’s a powerful election message in D6.

Angulo’s weakness would be in raising money. Even with public financing a candidate needs a threshold amount of private donations, and I am not sure how she gets it (Daly had the advantage of having personal money he could contribute to his 2000 race).

Angulo’s other disadvantage is that D6 voters who do not like Kim or Peskin could quickly write her off.

As an aide to a D3 supervisor, Angulo has to be careful in announcing she is running to serve D6. If she does run, she would immediately become the frontrunner.

Matt Haney has served on the San Francisco School Board since January 2013. This gives him an important edge.

I always say that voters really like elevating School Board members to supervisor (e.g. Tom Ammiano, Leland Yee, Jane Kim, Eric Mar, Norman Yee, Sandy Fewer). It’s a combination of enhanced name recognition by having run before and a candidate’s positive identification with kids and education, which voters like.

While Angulo has Kim and Peskin in her camp, Haney is a close associate of the nationally popular progressive, Van Jones. A mailer with Jones urging a vote for Haney would positively influence D6 voters.

Haney has already shown he can raise money. His past campaigns have been managed by Nicole Derse’s 50+1 Strategies, and I assume this one would be as well. Derse’s group is remarkably successful winning local elections.

Haney must overcome two key challenges.  First, he has not done much for the district The only D6-specific issue that I am aware Haney has been involved with is the recent vote to create a Mission Bay school. But that school won’t exist in time for the November 2018 election.

A candidate’s prior district activity is usually not relevant. But progressives choosing between Haney and Angulo could favor the latter based on her D6 achievements.

Haney’s other challenge is his unclear local political identity. He has maintained a good working relationship with Ed Lee,  which is a disqualifying mark for some progressives. Yet Haney was recently featured in a photo promoting Rafael Mandelman’s D8 challenge to mayoral appointee Jeff Sheehy, clearly a nod to progressives.

Haney’s ability to work with diverse political factions would make him an effective supervisor. But some voters prefer supervisors who stay on their side.

Sonja Trauss was talking about the need for San Francisco to build a lot more housing well before many others embraced that mission. She has a deeply loyal volunteer base of pro-housing activists that will work day and night for her election.

In a three-way race with Angulo and Haney, Trauss could garner most of the more moderate support. Scott Wiener came close to winning D6 in his State Senate race against Jane Kim, and D6’s pro-housing voters will be with Sonya. Wiener has already endorsed Trauss.

Trauss’ challenge is that she is deeply despised by some progressives. Based on response to my article last week about YIMBYs—which did not even mention Trauss—-Trauss’ opponents have a virtual file of comments she has made that they plan to use against her (since these comments were sent via personal email I do not feel I can print them).

Many progressives would be happy to have either Angulo or Haney replace Kim; they do not want Trauss winning this seat. Expect a huge effort for supporters of both Angulo and Haney to get the other’s second choice votes.

Although D6 is the site of more new housing than any other district, no supervisors race has seen development as a major issues. 2018 will be no exception.

Since so many district projects will have already been approved by November 2018, the key D6 issues will instead be public safety, homelessness, transit and pedestrian safety, and small business attraction and retention. The district has changed so much since Kim’s 2010 election that it is unclear where voters stand on a lot of these key issues—the campaigns will have to figure this out.

I know this for sure: in 2000 and 2010 Tenderloin voters went big for Daly and Kim. Both won. Candidates should consider this history when deciding which constituencies to cultivate.

Randy Shaw is Editor of Beyond Chron. He recounts the Tenderloin’s history of electoral power in The Tenderloin: Sex, Crime and Resistance in the Heart of San Francisco