Will Parkmerced Set Precedent for Westside Development? It Already Has 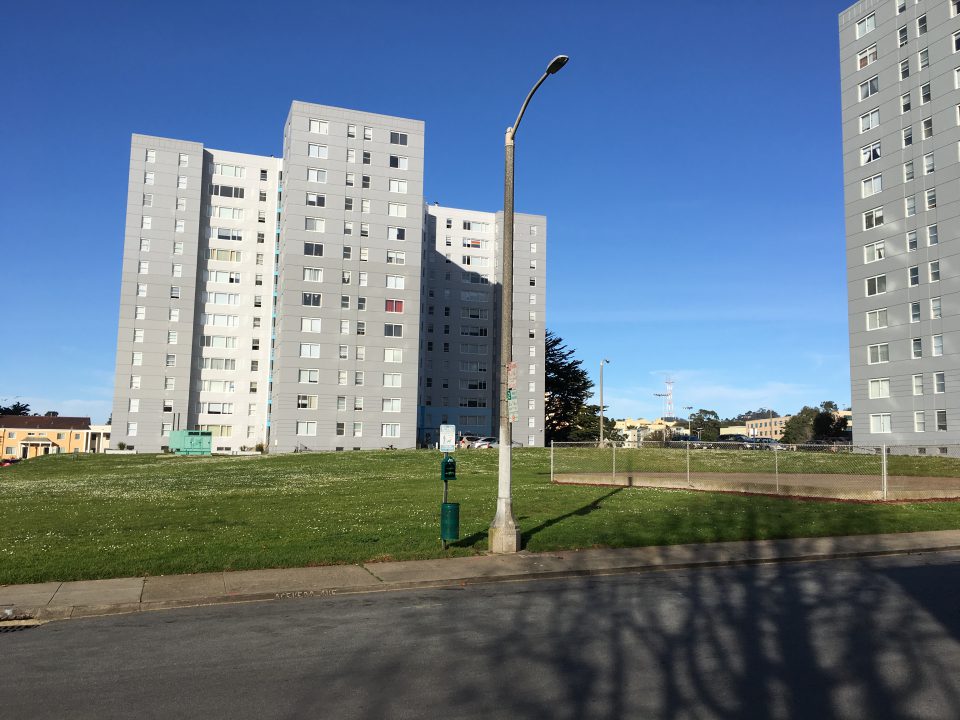 Richard Brandi remembers growing up in 1960s San Francisco like it was yesterday.

The architectural historian attended Lick-Wilmerding High School in Ingleside, not far from his childhood home in Visitation Valley. Back then, he says, growing up in the residential part of the city meant living in a single-family home owned by ones’ parents, as his was. But beyond the “blanket of single family homes,” as Brandi calls the west side, lived a friend of his from high school whose parents did not own a house, but instead, rented a townhouse in Parkmerced.

Tucked away in the southwestern corner of the city, Parkmerced began as an anomaly. Within its 152 acres, 13-story residential towers dot the skyline – 11 of them – which passers-by can spot with ease once Highway 280 becomes 19th Avenue. Two-story townhouses, like the one Brandi’s friend grew up in, fill in the gaps between the spaced-out high-rise towers scattered among acres of green space.

Between 1941–1951, 3,221 housing units were constructed to accommodate returning service members following the end of WWII. While rare for San Francisco, Parkmerced’s “towers in the park” model of development was inspired by a trend occurring nationwide at the time. High-rise towers with plenty of open space between was a model spearheaded by Charles-Édouard Jeanneret, known as Le Corbusier, a Swiss-French architect and a pioneer of modern architecture.

Parkmerced was the first major influx of housing for the city’s west side, and, says Brandi, the entire city.

“Older parts of San Francisco used to be single family houses, but then became flats, and maybe apartments, but that was all one-off individual builders or small developers, not anything massive like Parkmerced,” Brandi said.

Starting in the middle of this year, Parkmerced will continue its legacy as the vanguard of west-side density as its new owners, Parkmerced LLC, which includes Maximus Real Estate, break ground on the first batch of the 5,679 total housing units expected to be completed 20-30 years from now.

All the towers will stay, while all the townhouses will be demolished to make way for denser buildings. Of the 3,221 current units, 1,538 are rent controlled units slated for demolition and will be replaced. The 1:1 replacement of rent controlled units was a agreed to by Parkmerced LLC  to secure the board’s 2011 approval of the project, which barely squeaked by with a 6–5 vote.

“This is one of the most significant injections of new housing activity that the city has seen in decades,” said Parkmerced LLC spokesperson P.J. Johnston. “It’s really the only significant creation of new housing in the city’s west side in many, many decades.”

And that’s the truth. Within the last 10 years, Districts 4 and 7, which combine to make up most of the area west of Twin Peaks, saw 590 housing units constructed out of the 25,658 constructed city-wide, or just over 2 percent, according to the most recent Housing Balance Report released by the planning department. Even worse, the net-gain in affordable units was only 109.

Along with building housing on a side of town lacking housing construction, up to 310,000 of commercial space will be added, and as part of the develop agreement, the M-line streetcar will be rerouted through the neighborhood. Johnston says current neighborhood is built around the dependence of automobiles, and with the combination of additional transit options and closer good and services, Parkmerced residents can ditch the automobile and escape the “isolated suburban enclave [that’s] disconnected from the rest of the city,” he said.

But for Parkmerced residents, all that goodness comes with a heavy price tag. Not the construction costs, which will go “into the billions” as Johnston contends, but the 20 to 30 years of construction necessary to complete the project.

Among the first buildings to be built will be a 5-story building at 199 Vidal Drive; a good-sized plot of mostly-green grass in-between two 13-story towers. Roman Karpenko lives in one of them at 310 Arballo Drive with his wife and 14-month-old daughter. From his apartment near the top, Karpenko says he can hear the voices of people talking below due to the wind tunnel effect created by the two towers.

“Imagine construction, [my daughter] is not going to be able to sleep a day, or be able to get a nap, especially [during] the beginning of construction when all these bulldozers and excavation will be on 10 hours per day,” he said.

Karpenko has lived in Parkmerced for seven years and is an electrician by trade, belonging to IBEW Local Union 6. He loves the open space, along with the uniqueness of the neighborhood he says in unlike most of the city, but he works on construction sites for a living, so he says he knows what to expect.

“As soon as sounds pick up, I’m sure my wife is going to say we have to move because of the baby,” he said.

Johnston says Parkmerced’s construction efforts “will be planned to absolutely minimize traffic and living impacts, never will you have [the] entire property covered in construction.”

Unfortunately for Karpenko and the many other residents opposed to Parkmerced’s redevelopment, San Francisco is in a housing crisis. And to combat the city’s status as the most expensive city to rent in the United States, city officials have decided in recent years that the only remedy is to build. Market-rate housing or subsidized affordable housing, all of it has the support of the San Francisco Planning Department, according to Jasper Rubin, associate professor of Urban Studies and Planning at SF State and former planner at the planning department.

But for the west side, it’s not as simple as just building, but rather, finding parcels not already covered in single family homes to build on.

“Parkmerced is rare,” Rubin said. “There aren’t that many parcels or combination of parcels that allow a developer to work at that scale, most of the large projects we’re seeing now are on the waterfront.”

When the west side of the city was parceled out years ago, Rubin says the parcels were purposely plotted small to accommodate single family homes. A combination of small parcels, mixed with predominantly RH-1(D) zoning, makes it almost impossible for dense housing construction on the west side.

Rubin says Parkmerced and other possible west side projects, including potential housing at Stonestown Galleria, will not change anything, and will not set a precedent.

“It’s the zoning,” Rubin said. “Single family homes are what planners call hard sites, not only is the zoning very restrictive, but I think people are unlikely to sell off their homes, and for a developer, in order to get a footprint large enough to support a tower, they would have to buy a collection of lots.”

Rubin does see some light at the end of the tunnel. State legislation proposed by Sen. Scott Wiener (D-San Francisco), SB 827, may help developers sidestep many of the problems associated with building on San Francisco’s west side given they build on or near transit corridors.

“If it passes, it has the potential to change the landscape of the west side, much more than Parkmerced,” Rubin said.