Will Newsom Resign Over Homicide Rate? 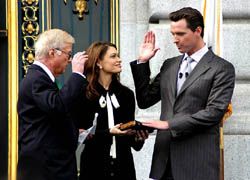 In the summer of 2004, Mayor Gavin Newsom fielded a call on a talk-radio program from a San Franciscan irate about the high number of homicides occurring at the time. The caller threatened to start a recall campaign against Newsom for failing to solve the problem, to which the Mayor replied, “I come back next year, and you still see these homicide rates, you can begin the campaign to recall me. And you know what? I may be right there as a co-signer of that effort.” A year later, when it appeared 2005 would see less homicides than the previous year, Newsom celebrated the drop by saying he was “happy to tell everyone – except my opponents and enemies – that I’m not going to resign.” Yet last week, the number of homicides in 2005 climbed to 91, already higher than last year’s 88. After taking responsibility for San Francisco’s homicide rate, some now wonder how the Mayor will handle his failure to make good on his promise to stop violence in our city.

The recent spike in homicides came as a shock to many San Franciscans, as mid-year reports seemed to show a drop in violence citywide. But a spate of killings in the past few months, most notably in the Western Addition, put an end to hopes that the problem was over, and sparked renewed public debate over the issue. A recent Board of Supervisors hearing on how to end violence in the city along with increased media attention put the rising homicide rate back in the center of the public eye.

Last year, Newsom received widespread praise for taking responsibility of the homicide rate. He visited crime scenes, spent time in the violence-plagued neighborhoods of Bayview/Hunters Point, and demanded results from his staff towards stopping violence in the city. Most importantly, he ultimately told San Franciscans he should be held personally accountable for violent crime.

The amount of change any one Mayor can affect on something with as many root causes as the homicide rate remains debatable. Drops in federal funding, uncontrollable economic trends, and a lack of resources locally can all contribute to rises in violence that any administration would be hard-pressed to control.

But Newsom promised he would hold himself accountable to the citizens of San Francisco anyway. Now, it appears the Mayor may be trying to avoid being personally blamed for the spate of murders.

With November not even over yet, and the number of homicides this year already higher than last year, it’s without question the Mayor has failed to lessen violence citywide. Activists can point to an array of missed opportunities for achieving his goal, including failing to find more money for jobs, education and social programs in the city’s most economically depressed areas.

Yet it remains unclear whether Newsom will admit those failures. Perhaps more importantly, it seems unlikely he will publicly address his statement that he would help a recall campaign against him should he fail to lessen homicides. Nor does it appear that, since he told reporters that he wouldn’t resign after discovering mid-year the homicide rate was dropping, that he will now offer to resign since it is in fact rising.

Some activists feel any talk of resignation simply gets in the way of solving the problem, including Sharon Hewitt, director of the Community Leadership Academy Emergency Response (CLEAR) Project. Hewitt, speaking just a few hours after leaving the funeral of the recently murder 18-year-old San Franciscan James Love, said she hopes instead that the recent rise will finally force city officials and communities to take more concrete steps towards stopping the violence – violence she says will only continue to spread if left unaddressed.

“There is no containment to this violence – our neighborhoods are too contiguous,” said Hewitt. “When people are armed and poverty continues to eradicate safety nets from our most vulnerable neighborhoods.we can only expect this cancer to grow and effect other parts of the city.”

Whether Newsom speaks to the public regarding his previous comments about begin recalled or resigning due to a rise in homicide rates or not remains to be seen. Either way, the Mayor should recognize that promises to his constituents mean something, and that if he promises accountability, he should make good on that promise.