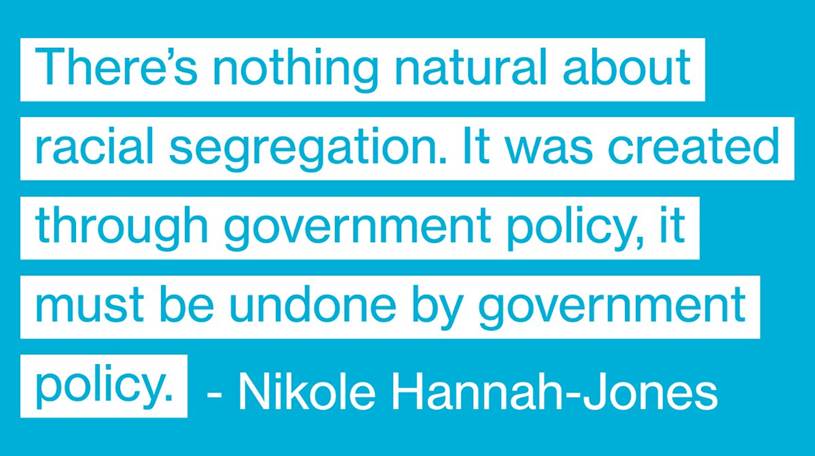 Many white “progressives” seem to believe that working class and low-income Black families should be grateful to live anywhere in high-housing cost cities. Hannah-Jones doesn’t buy that. She noted the conflict between affordable housing providers eager to avoid contentious neighborhood fights and fair housing advocates who want Black and Latinx families to get access to resistant white neighborhoods. She observed, “When white neighborhoods think low-income housing will bring in Black or Brown people the opposition gets almost violent.”

I describe in Generation Priced Out: Who Gets to Live in the New Urban America how Habitat for Humanity, NYC never faced opposition until 2017 when it sought to build affordable senior housing in an affluent, primarily white neighborhood. Opponents from “progressive” Greenwich Village and Nolita  sought to defund Habitat chapters nationally to pressure the New York City chapter to withdraw from the project. A project that would help desegregate the neighborhood.

Habitat NYC never wavered. But many nonprofit housing groups don’t want to risk funding by getting into fights with resistant white neighborhoods. Even “progressive” cities like San Francisco have little to no affordable housing—and few Black people—in much of the city.

Based on the lack of action to rectify this, the Democrats running these cities don’t seem to mind.

Betsy Hodges, Mayor of Minneapolis from 2014-18, wrote in the New York Times last week, “In Minneapolis, the white liberals I represented as a Council member and mayor were very supportive of summer jobs programs that benefited young people of color. I also saw them fight every proposal to fundamentally change how we provide education to those same young people. They applauded restoring funding for the rental assistance hotline. They also signed petitions and brought lawsuits against sweeping reform to zoning laws that would promote housing affordability and integration.”

Many “progressives” see “social housing” and expanding affordable housing as key to keeping Black people in their city. But when cities concentrate affordable housing in crime-filled neighborhoods lacking good transit and public amenities, Black families living in such communities—or in long neglected public housing projects– don’t benefit as much from city living as many whites believe.

It’s no mystery how to end racial segregation. In fact, the very ease of the solution likely explains why white homeowners have fought so zealously to keep the status quo.

These five steps go beyond the essential requirement that cities prevent displacement of existing residents.  I’ve probably written more rent control,  just cause eviction, and housing preservation laws than any current living person. These laws are essential. But San Francisco and other cities show that strong tenant and rental housing protection laws can coexist with extreme segregation—so strategies that focus on preserving the status quo are not sufficient.

Here’s what Democrat politicians committed to ending segregation can do:

The Movement for Black Lives has expanded political possibilities. But ending segregation in Democratic-controlled cities remains far from inevitable.

We should ask Democratic politicians a simple question: what is your plan to desegregate your city? I never see this asked on candidate questionnaires. This speaks to segregation’s political acceptance, and to the widespread view that we all oppose segregation so why do we have to do anything about it?