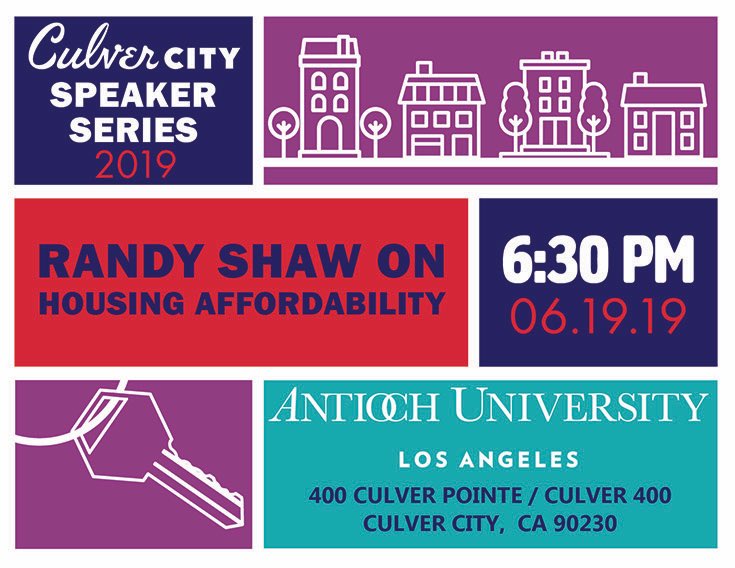 I’m going to Culver City (just outside Los Angeles) on June 19 to talk about my book, Generation Priced Out: Who Gets to Live in the New Urban America, and how the city must address its worsening affordability crisis. I will also be discussing the troubling plans by adjacent Santa Monica—long a “progressive” bastion—to convert a 227-acre airport into a park rather than housing.

My father was a dentist in Culver City from the 1960’s through the 1980’s. It was long the quintessential blue-collar town. We especially liked Culver City because you could buy fireworks there that were illegal in Los Angeles; my father also appreciated that his property taxes on the south side of Washington Blvd. were much lower than Los Angeles taxes across the street.

Like many formerly blue-collar cities, Culver City remained affordable until the past decade. Today its median home prices exceed $1million and renters must pay on average $2639 for an 865 square foot apartment.

Culver City’s transformation began when a booming economy brought higher-paid workers into the area. As Curbed LA reported, since 2017 “Facebook, Apple, Amazon, Netflix, and Google have collectively laid claim to at least 3.35 million square feet in Los Angeles.” In Culver City, Amazon leased 530,000 square feet for a project opening in 2021 and another 75,000 square feet at a nearby development opening this year. Apple leased an entire 128,000 square foot building under construction near the Culver City’s Expo Line station; the tech giant already rents 85,500 square feet nearby.

Culver City’s proximity to Los Angeles and Santa Monica means that its housing market attracts well-paid workers from those cities as well. Like the rapid gentrification of Highland Park that I describe in Generation Priced Out,  Culver City’s blue-collar history did not deter white collar workers from discovering its charms as they searched for housing in more affordable neighborhoods.

As workers priced out of Santa Monica and desirable LA neighborhoods turned to Culver City, housing prices predictably shot up.  And like nearly all high-housing cost cities, it was not “luxury development” that gentrified Culver City. Rather,  Culver City’s failure (and that of adjacent cities) to build new units to address rising demand led higher-income buyers and renters to occupy a housing stock formerly affordable to blue-collar workers.

In response to rising unaffordability Culver City should have enacted rent control and just cause eviction laws and built a lot more housing to relieve pressure on the existing supply.

Unfortunately, it did neither.

A just cause eviction/rent control measure could pass in Culver City but it may take until at least 2022. A lot of displacement can occur before longterm tenants get the legal protections they deserve.

In 2018, Culver City only permitted 69 housing units. 55 were single family homes! And if 69 units seems paltry for a city of 40,000 residents, that was doubled the number the city permitted in any year since 2002.

I drove through Culver City in April and saw a lot of construction going on. I then learned everything was office space, not housing.

Like neighboring Los Angeles, Culver City is now seeing the impacts of not building sufficient housing for decades. And while many residents are happy to see their property values rising, the economic and racial diversity that attracted many to Culver City in the first place is at risk.

Culver City has a choice. It can continue moving in the direction of Palo Alto and become a city primarily for rich white people, or it can expand housing opportunities for a new generation of more racially diverse working and middle-class residents.

I’ll be explaining why Culver City is better off choosing the latter direction in my June 19 talk.

In April 1979, Santa Monica enacted the state’s strongest rent control and just cause eviction law. I have long lauded the city as a progressive bastion whose transportation and housing policies showed local government at its best.

But as I detail in Generation Priced Out, a key affordability strategy for progressive high housing cost cities is using public land for affordable housing. Such sites are already under city control and enable construction without land purchase costs.  Santa Monica should jump at the opportunity to expand housing on its former airport. Instead, it is acting more like Palo Alto and Beverly Hills in planning to convert the 227-acre  site into a park.

Steven Sharp, the co-founder and editor of Urbanize.LA wrote a great piece last March about Santa Monica’s misguided approach for the LA Times. Please read it if you have not already done so.

Santa Monica has an historic opportunity to provide thousands of units for low-income and working and middle-class residents otherwise priced out of the city. An opportunity to greatly increase its economic and racial diversity.

How can Santa Monica be deemed “progressive” if it bypasses this opportunity and instead builds a large park for its wealthy, primarily white residents? Santa Monica’s support for existing longterm tenants in the city is not enough.

I’ll be discussing how Culver City, Santa Monica and LA can and must do better on building housing on June 19 at 6:30 at Antioch University.  The event is free and open to the public, see the photo above for  details. A book signing will follow my talk and the ensuing discussion.

Randy Shaw is Editor of Beyond Chron. He is author of Generation Priced Out: Who Gets to Live in the New Urban America