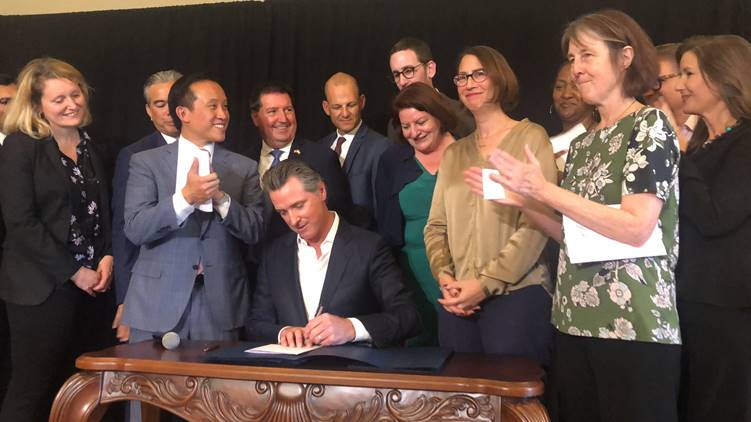 On October 8, the broadest political coalition for a California tenant protection measure in history assembled in Oakland for a signing ceremony for AB 1482 and other housing bills. Nearly every key state legislator joined Governor Newsom, State Senate Leader Adkins, and AB 1482 sponsor David Chiu for the event.

ACCE,  PICO, and SEIU locals were among the community groups joining the celebration. Also present were key members of the 3 P’s Coalition for Housing Production, Protection and Preservation. These  nonprofit housing developers, foundations, policy groups and private developers brought the political clout to the battle to enact statewide rent caps and just cause eviction laws that tenant advocates lacked on their own.

*On October 8 Washington DC unveiled its long awaited 93-page Comprehensive Plan that would be a huge step forward for increasing affordability. Thanks to the tireless efforts of Greater Greater Washington and other groups in the Housing Priorities Coalition, the new plan openly promotes strategies for expanding racial and economic inclusion;

*On October 4, Austin introduced its proposed new land development code which “envisions a future with more multi-unit housing and fewer single-family homes.” This follows the August 2018 shelving of a multi-year land use revision process (CodeNEXT), which left  prospects for Austin’s land use reform on life support. But Austin activists associated with groups like AURA and Austin Habitat for Humanity never gave up. After Austin voters backed pro-housing candidates in the November 2018 election, momentum returned for enacting long overdue density reforms.

* In June, Oregon followed Minneapolis’ December 2018 example and eliminated exclusionary single-family zoning. It was the nation’s first statewide ban. Earlier in 2019 Oregon went from banning rent control to enacting it statewide. This will particularly increase affordability in Portland, whose at risk tenants have long needed just cause eviction protections and an anti-rent gouging law. House Speaker Tina Kotek played key roles in the passage of both laws, again reflecting—as with Lisa Bender in Minneapolis and Gregorio Casar in Austin— the importance of electing strong pro-housing candidates.

*Boulder, Colorado is running its strongest pro-housing council slate in years. Many Boulder residents are not accepting the city’s transformation into an elite, white enclave without a fight. Cambridge is also running a strong pro-housing slate; it will take only a one vote shift in the council to pass the city’s desperately needed 100%-Affordable Housing Zoning Overlay.

*In September Bernie Sanders and Alexandria Ocasio-Cortez  called for an end to exclusionary single-family home zoning (Elizabeth Warren had previously done so).  People’s Action did the same in its “A National Homes Guarantee.” Sanders’ connection of housing to the Green New Deal and support from national progressive leaders for infill housing and other housing strategies for addressing climate change is particularly noteworthy. It should help marginalize local “progressives” who battle against building new apartments.

*Activists and elected officials in Minneapolis, Chicago, Boston, Denver and other high-housing cost cities are working to overturn state laws barring them from enacting rent control and eviction protections. As I argue in Generation Priced Out:Who Gets to Live in the New Urban America, protecting tenants from eviction without cause and excessive rent hikes must be a core component of cities affordability strategy. It’s the “Protection” part of the 3Ps.

*Thanks to Our Homes, Our Votes: 2020,  the National Low Income Housing Coalition, and over 700 groups, the housing crisis has been placed on the Democratic Presidential nomination map as never before. All major candidates have produced ambitious housing plans. And while debate moderators have ignored the housing crisis debate, tonight’s debate offers a new opportunity for candidates to address the issue.

*Greta Thunberg did not pass a housing bill but she offered a powerful wake-up call for “environmentalists” who wrongly see  anti-development, anti-infill housing policies as “pro-green” (a particularly common view in San Francisco). Housing is a climate change issue, and recognition of this is growing.

Yes,  there is still much work to be done. Rising construction costs have slowed the construction of publicly funded affordable housing, creating a backlash in Los Angeles and other cities. Massachusetts has yet to pass its Housing Choice bill to allow new projects to be approved by a majority vote, with the super-majority requirement continuing to kill projects.

And for all of California’s success on the tenant protection front, the city’s historic housing shortage was not meaningfully addressed by the state legislature in 2019. But that same October 8 signing event saw Governor Newsom and key legislators made it clear that they plan to bring action on housing production in 2020.

Newsom used the October 8 event to praise State Senator Scott Wiener’s efforts to pass SB 50, which requires cities to allow six-story housing developments on or near transit corridors. SB 50 appeared headed for passage in May when it was unexpectedly converted to a two-year bill; it now must pass by the end of January 2020.

SB 50’s shelving was seen as a major setback for Newsom. But he made it clear that the fight to increase California’s housing supply is not over. In addition to praising Wiener the governor said: “You [Assemblymember David Chiu] have a bill on density bonuses [near public transit]; that’s an important one. It makes perfect sense. But it will make more sense when we expand it. That’s next year’s agenda.”

This means that provisions of SB 50 could be folded into another bill. Support for a production bill n got further encouragement when Newsom’s positive words were echoed by Senate leader Toni Adkins. I’ve blamed Adkins for SB50’s unexpected and sudden shelving last May, but her comments in recent weeks have even convinced me that she wants a major housing production bill (whether SB50 or another measure) to pass in January,

And if you claim to be concerned with climate change but aren’t fighting *against* the housing zoning laws that have led to 75% of #seattle land still zoned for SINGLE FAMILY USE – and if you aren’t fighting *for* density in our city, you are doing it wrong—Seattle Councilmember Teresa Mosqueda, Oct. 10 tweet

As I spoke around the country promoting Generation Priced Out I heard from activists opposing my support for increased housing production. They claimed that enough new market rate housing is being built without requiring zoning changes. They also insisted that six-story buildings on transit corridors would cause gentrification and displacement.

But if cities were building all the market rate housing necessary to meet population and jobs growth, why are 140,000 people commuting by car from Sacramento to the Bay Area each day? Why do so many Los Angeles workers have to commute similar distances to their jobs?

Most of these commuters do not qualify for “affordable” housing. So saying that the “solution” to the housing crisis can exclusively involve building affordable units is nonsense. Such anti-market rate housing arguments also ignore the climate change impacts of pricing the working and middle-class out of cities where they work.

Some Los Angeles opponents of SB 50 point to their backing the Transit Oriented Communities law  (Measure JJJ) to say they support increasing density on transit corridors if done the “right” way.  But the TOC program,  approved by voters in 2016, did not rezone neighborhoods. Nor does TOC  apply to single-family zoned neighborhoods. Unlike SB 50 and the Bernie Sanders, Elizabeth Warren and AOC’s housing plans, the TOC does not challenge exclusionary zoning.

TOC has created 4000 units since passage. That’s nowhere near the new supply Los Angeles, which has added one million residents since 1970, needs to meet its steadily growing workforce. It’s a great program but such a small-scale strategy cannot address the enormities of the affordability and climate change crisis

6-Story Buildings Do Not Drive “Gentrification”

Those claiming SB 50 and similar bills upzoning transit corridors for housing need to identify the actual neighborhoods they claim went from affordable to gentrified due to new six-story buildings. I cannot identify a single such community in San Francisco.  To the contrary, nearly all San Francisco neighborhoods were gentrified without virtually any new development.

There is no neighborhood in Berkeley, Oakland or Los Angeles where new six-story buildings on or near transit corridors drove the gentrification process. As with San Francisco, the norm in all three cities was  gentrification without new development.

Generation Priced Out: Who Gets to Live in the New Urban America  describes how stopping new housing has not made cities more affordable. To the contrary, the failure to build to meet jobs and population growth has caused housing prices to explode—and worsened climate change by forcing priced out workers to drive 1-2 hours to get to work.

Minneapolis gave attacks on exclusionary zoning a huge boost when it ended such policies last December .California would give the national battle for increased affordability an even bigger push by requiring cities to allow new six-story homes on transit corridors.  Legalizing ADU’s and fourplexes is great, but building the supply cities need requires upzoning transit corridors.

California’s legislature must act by January 30. It’s a less than four month sprint to get it done.