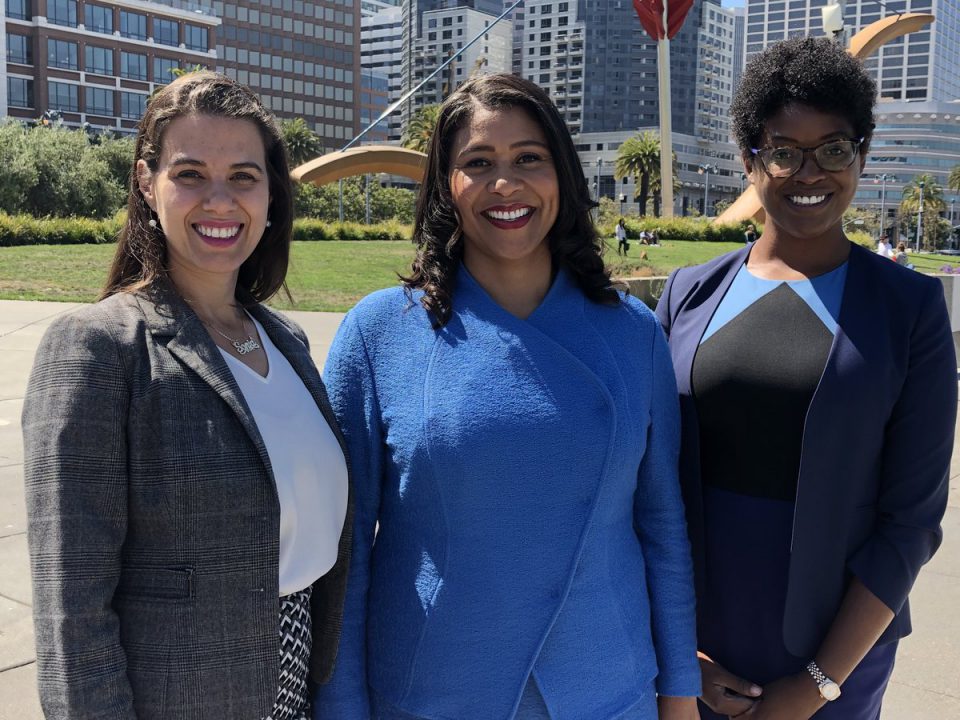 San Francisco Mayor London Breed has duo endorsed Christine Johnson and Sonja Trauss in the D6 supervisor’s race. Her announcement followed the two candidates publicly aligning their campaigns earlier in the week, and came only days after Matt Haney gained the sole endorsement of the San Francisco Democratic Party.  Given Haney’s securing this coveted backing, Breed’s endorsement could not have come at a better time for his rivals.

I stated in my most recent story on the race (“SF’s Stellar District 6 Race,” July 17, 2018) that “Ranked Choice Voting May Prove Decisive.” There is no longer any doubt that RCV will decide the race.  Johnson and Trauss reached the same conclusion that the Leno and Kim campaigns reached against Breed: namely, uniting through ranked choice voting is the only way either can win.

Breed’s endorsement came as the Haney campaign was on a roll. From his campaign office event with CNN host and supporter Van Jones to his lengthening list of labor and community endorsements, Haney had the wind at his back.

While endorsements mean less in races where voters can easily meet candidates, Haney’s backing from Jones, Kamala Harris, Gavin Newsom, and incumbent Jane Kim helps him among voters who favor such prominent figures. Trauss countered Haney’s support with backing from David Chiu and Scott Wiener, but until last week Johnson lacked a single high profile endorsement with a potential to sway voters.

Breed’s endorsement likely saved Johnson’s campaign. And her backing of Sonja Trauss gives a woman that Haney accuses of being “divisive” the backing of San Francisco’s mayor and the state senator and assembly member who represent D6.

Breed is popular in D6. She won the most first-place votes in D6 in the mayor’s race and has spent a lot of time on D6 concerns during her short tenure as mayor. Her endorsement means that D6 voters who want to elect a close ally of the mayor will cast ballots for the Johnson-Trauss team.

The District 6 outcome is unpredictable because there has never been a contested supervisor’s race with anything approximating the current electorate. Not only is there a lot more housing in SOMA and Mission Bay since the 2000 and 2010 open races, but the Mission is no longer part of the district.

D6’s new arrivals are less familiar with the city’s “moderate” vs “progressive” political alliances, the culture of various Democratic clubs, and the long list of groups backing Haney. This helps explain why the most recent poll I heard about on this race (done shortly before Breed’s endorsement) mirrors early ones that had “undecided” winning handily (Haney was leading among those who knew the candidates).

Many voters are still not focused on the race. That’s likely why Mayor Breed did not hold an event with Trauss and Johnson to announce her endorsement but is instead doing so at a public event on September 8.

Haney is running a campaign reflecting a candidate who has won two School Board races. He hits bus stops at 6:30am and in early evening to talk to voters and social media promotes his endorsements and presence at community events. Haney has raised the most money, garnered the most political support and has the clearest path to victory.

But in a race where the candidates’ have few if any major disagreements—-both Haney and Trauss back Prop 10 (Costa Hawkins repeal) and no major policy dispute on a local issue has emerged from debates—this election appears to come down to political alliances.

Meaning, do D6 voters want a supervisor whose board alliances will be the same as those of Jane Kim? Or do they want to elect someone closely aligned with the agenda of Mayor Breed?

I would not at all be surprised if the latter represented a D6 majority.

Haney must also secure 50% of voters who prefer a white man over two women, one an African-American who grew up in public housing. This during a national election cycle where Democrats are touting their record number of women candidates.

Haney’s SF Chronicle response to his rivals teaming up showed why some think he is vulnerable. “Sonja is someone who causes division everywhere she goes, and Christine is someone who has been in and out of City Hall on commissions, and failing to deliver for this community,” he said. “Our residents are in need of something different.”

Trauss is “divisive” in the tradition of great social change activists who challenge the status quo. And Johnson followed the common path of first getting appointed to lower-level public bodies before ultimately reaching the Planning Commission. As a white male attorney, Haney’s comments bolstered critics’ claims that he is arrogant. He needs to stay on the high road.

On paper, Christine Johnson is a great candidate. But her campaign has not gotten into high gear. She has not held a public campaign kickoff, raised much money, or demonstrated a professional campaign operation that uses social media to build momentum.

Breed’s endorsement gives Johnson’s campaign the jumpstart it needs. Johnson’s candidacy will either reach its winning potential in September or reveal a candidate who could never assemble an effective campaign.

Trauss has a devoted following and is running a strong social media and field campaign. Her challenge remains that no political insider I have talked to gives her any chance to win. Many speak disparagingly of her even when they agree with her views.

Strongly opinionated women have a hard time winning elections in the United States.  Men who admire male activists for their battling against powerful interests see similar conduct by women like Sonja Trauss as “divisive.” I think Mayor Breed’s endorsement of Trauss helps her most by connecting her with Johnson, who has a less confrontational image.

Mayor Breed’s duo endorsement has injected new energy into the D6 race. Now all the candidates have to do is get voters to look away from the Donald Trump horror show for long enough to focus on the D6 race.