Why This May Day Matters 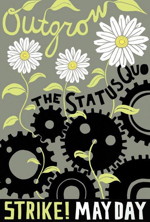 In 2012, the day is about occupying the space and the time to create a different world.

If the mainstream media was confused about Occupy Wall Street in its early days in Zuccotti Park, they’re bound to be completely befuddled this May Day. May Day already has a lot piled on it. In pre-Christian Europe, May Day was a time to dance, light bonfires, sing, and carry on in celebration of the changing seasons. May Day also marks the anniversary of the 1886 Haymarket massacre, which occurred during a Chicago strike for the eight-hour work day. Also called International Workers’ Day, it’s a holiday in more than 80 countries.

And most recently, the U.S. immigrants right movement has used May 1st for massive street demonstrations and strikes aimed at reforming laws and policies that result in imprisonment, deportation, and discrimination against undocumented people.

This May Day, the Occupy movement is getting involved, calling it “The day without the 99 percent.” What will May Day look like with so many traditions riding on it?

The way plans are shaping up, in at least some locations around the United States, it could be big, festive, and importantly, include elements of all the May Day traditions. And it could be profoundly different than the big days of action we’ve seen in the past. In the weeks leading up to May Day, various movements have been collaborating. And people will not only be protesting, they’ll be liberating spaces for education, the arts, general assemblies, and teach-ins.

There will be marches, of course. Some permitted, planned, and predictable. Others will be spontaneous, possibly disruptive. In spite of all the police planning (and collaboration with Wall Street private security forces) law enforcement will be kept guessing.

There will be fairs, free food, teach-ins, music, bicycling, marches, and fiestas.

In New York, occupiers are leading up to May Day by organizing 99 pickets in support of workers around the city, from jazz musicians to taxi drivers to laundry workers. The LGBTQTSGNC (Lesbian, Gay, Bisexual, Queer, Trans, Two-Spirit and Gender Non-Conforming) contingent will be out in force. They’ll be a “Guitarmy” marching from New York’s Bryant Park to Madison Square Park, with 1,000 guitars.

At Madison Square Park, there will be a Free University, organized by students fed up with tuition hikes and a student debt burden that’s now reached $1 trillion. Educators will bring classes to the park, there will be skill sharing and workshops.

At Bryant Park, they’ll be a “free” market—where everything is actually free— as well as public art and “opportunities for action.”

In Los Angeles, bike and car caravans will travel to the city center from the four cardinal directions. Along the way, there may be union strike action, and there will be “flash occupations,” free food, and direct action along the way, targeting the foreclosure crisis. Tuition hikes, income inequality, immigrant rights, police violence, the criminalizing of the homeless—the Los Angeles caravans each will focus on some combination of these topics.

In the San Francisco Bay area, nurses and social workers have declared a strike. Bridge and transportation workers and occupiers will attempt to shut down the Golden Gate Bridge. There will be “flying pickets” to shut down banks and business associations.

In Seattle, the group Hip Hop Occupiers to Decolonize is inviting artists, families, and the general public to a day of music, dance, live art, and speakers. There will also be marches of immigrants, occupiers, and workers.

Seattle occupiers will be serving free breakfasts to get the day off to a good start, something that can get you fined in Philadelphia, where the mayor has made it illegal to feed the hungry in city parks.

In Portland, occupiers plan to occupy a vacant home and hold a block party.

In Kalamazoo, Mich., they’ll be camped out on the sidewalk in front of the Bank of America, and there’s a good chance they’ll be doing civil disobedience to stop the auction of public land for hydraulic fracking.

The list goes on and on, from small towns in Wyoming to the place where it all started, lower Manhattan.

This broad range of topics and tactics may bewilder mainstream pundits, but it reflects a transformation in activism as profound as anything that’s happened in social change over the past decades. People are moving out of their isolated interest groups and causes. They’re coming together in a shared analysis, demonstrating their agreement about sources of some of our biggest problems—the overwhelming power of Wall Street and big corporations and our society’s continuing struggle with exclusion of people based on their race, gender, sexual orientation, immigration status, etc. And they’re developing shared ambitious goals and bold strategies that add up to real power and real possibility.

As often happens in the planning of a big event, some of the most important work began well before the actual day, with undocumented workers, union organizers, occupiers, and students coming together to plan events. They’re mixing it up across races, ages, backgrounds, and interests.

It’s a day without the 99 percent, say organizers. No work. No school. No housework. No shopping. No banking.

Even more than what people won’t be doing on May 1, though, the day is about showing up and protesting, but also building the world we want.

That part of Occupy seldom gets reported on. The media is too fixated on police action and on its own angst over whether Occupy has (or should have) a list of demands. What is too often missed is that the movement is about occupying the space and the time to create a different world. People outside the political establishment understand that conventional way of doing things doesn’t work anymore. Too many people are hurting.

The wealth of the 1 percent, dangled in front of the rest of us like a carrot, is more and more out of reach. The austerity budgets, the decaying of our towns and cities, the decline of schools and rising costs of college, the disruption of people’s live through immigration raids and deportations, the foreclosures, evictions, homelessness are increasing people’s thirst for change.

And we’re using up our heritage of natural resources, undermining the stability of the climate and the ecological systems that support life in order to channel more and more wealth to the 1 percent?

Few now believe that one or two changes in policy will solve this. A financial transaction tax and the restoration of Glass-Steagall would help — and there will be people calling for both on May Day. But what people increasingly understand is that these fixes would not be enough.

Instead, it will take we the people recreating a society, way of life, democracy, and livelihoods that make sense for today.

This May Day — of, by, and for working people (and people who wish they had work), immigrants, and everyone else in the 99 percent — could be a place to begin creating that new world.

Sarah van Gelder is co-founder and executive editor of YES! Magazine, a national, nonprofit media organization that fuses powerful ideas with practical actions. She is also editor of the new book: “This Changes Everything: Occupy Wall Street and the 99% Movement.” This piece was earlier published at Common Dreams.