Why the Fifty State Strategy Matters 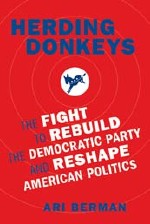 Next week, according to the polls, Democrats will take a shellacking – just four years after Howard Dean rescued them from political oblivion with his Fifty State Strategy, which deployed resources for the Party to compete everywhere. There will be a lot of finger pointing after Tuesday night’s election, and Democrats will have a lot of soul-searching to do about what went wrong – but also how they had built their success in the first place. Nation political correspondent Ari Berman’s new book, Herding Donkeys: The Fight to Rebuild the Democratic Party and Reshape American Politics, will become indispensable – as it chronicles the fight that Howard Dean took from his Presidential campaign, to the Chairmanship of the Democratic National Committee, to the fight for the mid-terms in 2006, to Barack Obama’s presidential campaign. And come next week, more progressives will want to read it.

By now, the story is familiar. Howard Dean, an underdog in the 2004 presidential race, became a serious contender – because he successfully harnessed opposition to the War in Iraq, and promoted an “outsider” strategy for Democrats who felt alienated by their own Party. He didn’t win the nomination, but John Kerry’s subsequent loss paved the way for Dean to become Chair of the Democratic Naitonal Committee – and his Fifty State Strategy. The 2006 elections vindicated Dean’s approach, and by Election Night 2008 Barack Obama proudly told his supporters that he could never have done it without Dean.

Ari Berman goes through much of this history in Herding Donkeys, and includes anecdotes about players who are not household names – but played a heroic role in what led to this success. One of his more interesting stories is of a similar power struggle for the chairmanship of the North Carolina Democratic Party that mirrored Dean’s rise nationally. “It very much ended up being an insider versus outsider campaign,” he writes, “whether you were an outsider because you were ideologically on the left, or you were an outsider because you were in a rural county that nobody cared about.”

Contrary to how the Beltway culture saw it, Howard Dean’s rise was not about liberals taking over the Democratic Party – but about de-centralizing the Party structure, so that Democrats of all ideological stripes and geographic base can feel a sense of ownership. It was this strategy that enabled Democrats to do so well in 2006, and for Obama to get well over 270 electoral votes – by revitalizing the Party in places like Indiana and Colorado.

Which, of course, begs the question – what went wrong? Berman lays much of the blame on Rahm Emanuel, who long held contempt for Howard Dean over different approaches they had for winning a Democratic majority in 2006. Dean was more interested in long-term investments for the Party, whereas Emanuel was used to a system with a DNC Chair who just gave money with no questions asked. As Berman reports, the two didn’t talk for six months before the mid-term elections. Eager to be one who settles scores, Emanuel made sure that Dean was shut out of a high-level position in the Obama Administration.

While Berman’s book is rich on stories about what led to the Democratic Party’s rise, it is short on what exactly led to its downfall after the 2008 elections. “Obama’s kind words notwithstanding,” writes Berman, “his inner circle didn’t seem particularly eager to credit Dean with laying the groundwork for Obama’s victory … His shabby treatment would come to represent a broader abandonment of the party’s grassroots base, especially as Obama packed his White House with well-worn veterans of previous administrations who embodied longevity over innovation and connections over change – quite an irony given his critique of Hillary as a washed-up Washington insider during the primary.”

The most provocative explanation Berman suggests – and one that I disagree with – is the Fifty State Strategy was a victim of its own success. “What was the point of having a Democratic congressman in Idaho or Western North Carolina,” he writes, “if that person opposed whatever the most popular Democratic President in a generation proposed?”

The obvious answer is that Idaho’s Walt Minnick and North Carolina’s Heath Shuler may have benefited from a Fifty State Strategy, but they were not products of the Howard Dean brand of politics. Shuler was a recruit of Rahm Emanuel, and Minnick had run a failed Senate race before in 1996 after being recruited by Washington insiders – where he openly repudiated everything Democrats stand for. Berman seems to acknowledge this, as he reports in his book that North Carolina Democrats who first elected Heath Shuler have become disillusioned with him – and are exploring a possible primary challenge.

Democrats will need to remain competitive in all fifty states to maintain a majority, but the growing pains of such a struggle is dealing with Beltway creatures like Rahm Emanuel – and Blue Dog opportunists like Heath Shuler – who despise the Howard Deans of the world. The challenge, as we look ahead past next week’s elections, will be to nurture the Party’s grassroots nationwide – so that Red State Democrats like those in Heath Shuler’s district can feel empowered to hold their members accountable, and take them out (if necessary) when they fail to act like real Democrats.