Why the Arizona Cardinals Can Win 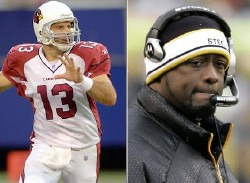 The Pittsburgh Steelers are justifiably favored to win Sunday’s Super Bowl, held at Raymond James Stadium in Tampa, Florida. And the Steelers are clearly the progressive choice, with an Obama-like young African-American coach and, to my knowledge, the only NFL owner who actively campaigned with and for Barack Obama. But a Steelers victory may be less assured than many suspect. Here’s why …

There is not much buzz around the Super Bowl this year. The sharp reduction in media, lack of a powerful story line, and the absence of a team from a major national media market appear to be the causes of the declining interest.

Plus the talk around the water coolers and coffee stands is still focused on President Obama. In a time of national economic distress, the Super Bowl appears less relevant than ever.

But for those paying attention to the game, I’d like to offer a reason why a victory by the Arizona Cardinals would not be a great surprise.

The Pittsburgh Steelers have had home field advantage throughout the playoffs. This has resulted in their reaching the Super Bowl after games in snow and cold against two teams—the Ravens and Titans—with mediocre offenses.

The Ravens and Titans have offensive limitations under clear skies and perfect field conditions; it’s no wonder neither team moved the ball on a slippery field, and the windy, snowy, and cold conditions in which they played the Steelers.

The combination of weak offenses and challenging field conditions made the Steelers defense look stronger than it really is. Arizona’s offense is better than either of the teams the Steelers faced in the playoffs, and the Super Bowl is played on what should be a calm night and moisture-free field in Tampa, Florida.

Before the playoffs began, the Panthers and Giants were considered the strongest teams. Arizona decimated the Panthers in Carolina, and then shocked everyone by defeating the Eagles, who became the Super Bowl favorite after trouncing the Giants in the Meadowlands.

Arizona’s victory over Carolina was among the biggest upsets in pro football history. I am not aware of a single pundit who picked them to win, or who thought they would prevail in one-sided fashion.

The Cardinals defeat of the Eagles shows that the Carolina outcome was not a fluke, or based solely on Jake Delhomme’s self-destruction.

Arizona could also win because Hines Ward, key to the Steeler’s less than stellar offense, is hurting. He insists he’ll play, but his effectiveness is doubtful.

Ben Roethlisberger has survived numerous head injuries, and one hard hit could put him on the sidelines. He is less effective without Ward, and if the Steelers running game falters, Roethlisberger may lack the offensive weapons to compensate.

Why Not Pick Arizona?

Since the teams founding in Chicago, through its troubled years in St. Louis and now in Arizona, nobody has gotten rich betting on the Cardinals. To the contrary, those betting heavily against the team clearly saw their investments outperform the stock market.

In a matchup between the storied Steelers franchise and the Cardinals legacy of failure, fans understandably must go with the former. There may never have been a greater ownership contrast in any Super Bowl, World Series, or NBA finals as between the fan and team friendly Rooney family that owns the Steelers, and the selfish, foolish, boorish Bidwells that have long been the bane of Cardinals fans.

But the Cardinals have a real chance to win.

Beyond Chron editor Randy Shaw made the mistake at an early age of becoming a Chicago Bear fan, and understands how long suffering Cardinal fans must feel.