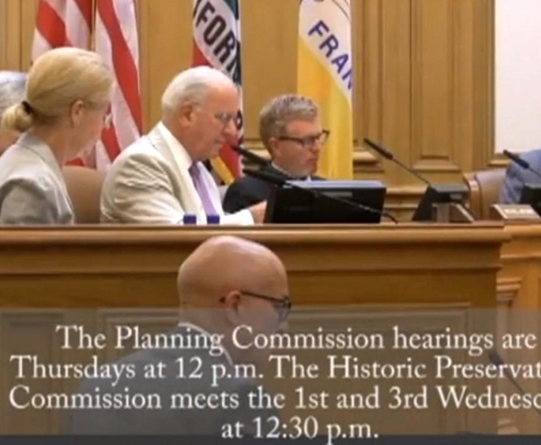 Regularly changing the composition of San Francisco’s commissions brings fresh perspectives and limits the coziness between appointees and the agencies they oversee. But some San Francisco activists now see these appointments as virtual civil service jobs. According to the SF Examiner, pressure is building on Board President David Chiu to reappoint two Planning Commissioners—Katherine Moore and Hisashi “Bill” Sugaya—who have served for eight years. A petition is circulating to keep the two appointees, whose reappointment would allegedly “take the politics out of planning.”“Take the politics out of planning.” That’s funny. I say this because I wrote a piece about these appointments in May 2006—- “Will Change Finally Come to San Francisco’s Planning Commission?”— and urged Peskin and the Board to “change the current business as usual attitude at Planning,” and not to “simply maintain the status quo.”Peskin’s appointments of Moore and Sugaya were explicitly political. If “politics had been taken out of planning,” neither would have been appointed.
Commissions Need Fresh PerspectivesI first noticed this idea that Commissioners should not be replaced “without cause” when the Board sought to make a change on the Police Commission. Defenders of Angela Chan saw a sinister plot in her replacement by Victor Hwang, claiming either that Chan was removed for being too sympathetic to Latinos (ignoring Hwang’s history of representing Latino immigrants) or that Mayor Lee (who was not even making the appointment) wanted someone more pro-police (ignoring that Hwang has filed more lawsuits against police misconduct than all of his critics combined).But the underlying premise—that Commissioners shouldn’t be replaced unless they have performed poorly—misunderstands the role of public commissions.Commissions serve two important roles: they provide public oversight for departments, and some issue quasi-judicial policy rulings that can be appealed to the Board of Supervisors, the courts, or both.Most focus on the latter function. That’s why politics has always determined who gets appointed to quasi-judicial commissions. After all, commissioners are political appointees.But when a Commission fails to perform a vital oversight role, as occurred at the Housing Authority prior to its takeover, its importance outside of policy decisions becomes clear. San Francisco’s Housing Authority commissioners were more concerned with keeping the Agency director happy than with serving the public’s interest, an all too common occurrence in these oversight bodies.If a Commissioner knows they will only serve four years, or potentially eight, they are less vested in perpetuating an inadequate status quo. Far too many Commissioners hold back on asking tough questions because they don’t want to rock the boat, when such oversight is exactly the reason commissions are needed in the first place.The Planning CommissionIt’s not surprising that petitions are being gathered around Chiu’s Planning Commission appointments, as its long been the city’s most high-profile and politicized Commission. But those backing the reappointment of Moore and Sugaya seem locked into a past in which the Planning Commission is fighting over development, rather than prioritizing ways to build and preserve affordable and/or rent-controlled housing. If you think that these two Commissioners represent a bulwark against excessive development, let me know what projects they have stopped. The Planning Commission did not even stop development under its slow-growth Agnos appointees. What the Planning Commission most needs are appointees who understand how a lack of planning code enforcement causes the loss of rental housing. This was recently raised in the context of the over 1000 units illegally rented to tourists in violation of local zoning laws. Many have asked why the Planning Department did not take the lead on this enforcement issue, and it’s a question the Commission should keep asking. The Planning Commission also needs appointees who will work to expedite housing developments without sacrificing public review. San Francisco cannot afford to continue artificially spiking housing development costs through unnecessary delays, and we need more Commissioners who will make changing this system a priority.Peskin appointed Commissioner Sagaya due to his background in historic preservation. He has not shown to be particularly progressive or pro-tenant, and many could replace him who would be a more effective advocate for tenant and rental housing concerns.Commissioner Moore has proven both progressive and pro-tenant. But she has served eight years, and t someone else deserves a chance to serve these interests on the Commission. I broke ground in drafting a 1994 ballot initiative whose Building Inspection Commission split appointments between the President of the Board of Supervisors and Mayor. This soon became the norm for the city’s top commissions. But I failed to consider the need for term limits on commissioners. This would have ensured fresh energy and allowed politicians to feel comfortable giving new people an opportunity to serve (the need for fresh perspectives is why I opposed the reappointment of conservative Mike Antonini in 2012 after he had already served on Planning for a decade).San Francisco is a city rich with talented people eager to serve on Commissions. Let’s not artificially shrink the talent pool by treating sitting commissioners as holders of civil service jobs who can only be replaced for cause.