Why is Max Baucus Even a Democrat? 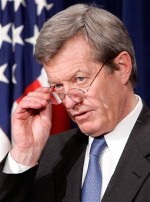 Senate Finance Committee Chairman Max Baucus finally produced his own health care bill yesterday – and it’s an absolute gift to the insurance industry. Despite telling us for months that reform must be watered down to attract “bipartisan” support, Baucus couldn’t even muster the three Republicans that he handpicked to craft a “compromise” bill. Other Democratic Senators are livid, with Jay Rockefeller saying there is no way he can vote for the bill. The U.S. Senate is now expected to merge Baucus’ proposal (which does not have a public option) with a bill the Health Committee passed in July (which does), to produce a final version. Why did the Democrats allow Max Baucus to single-handedly delay health care reform for months – when it’s been clear all along that he’s a shill for the insurance companies? And why is Max Baucus even a Democrat, and what motivated him to run as one?

Politicians choose to run for office as a Republican or a Democrat because – at least we hope – they believe in something. If you think government should be there to help the less fortunate, and you revere the likes of Franklin Roosevelt and Ted Kennedy, you run for office as a Democrat. If you believe the free market should be left to dictate public policy and you support what Ronald Reagan did as President, you run for office as a Republican. You will have to make compromises along the way to pass legislation, but at least go into politics with some core beliefs that guide your public service career.

For Max Baucus, choosing his party affiliation was nothing but a cynical calculation. According to the Missoula Independent, Baucus decided in 1972 to run for the Montana state legislature. Having just graduated from Stanford Law School and opened a practice in his hometown, Baucus walked into the office of a local daily newspapers and posed the following question to a group of editors: “which party affiliation – Democrat or Republican – did they think would give him his best chance to win?” Apparently, they advised him to run as a Democrat.

We can all point to politicians who have done unseemly things in order to “win,” but in most cases even “winning” has an ideological or philosophical rationale. Bill Clinton betrayed the Left in 1996 with DOMA and Welfare Repeal to get re-elected, but even his liberal defenders could argue it was done to stop right-wing Republicans from taking all three branches of government. Baucus, however, was just a young ambitious politician – and the prospect of “winning” or “losing” his first race would not affect anyone except himself. Choosing which political party to run was like picking a brand of toothpaste.

Thirty-seven years later, Baucus is a U.S. Senator from Montana. His decades on Capitol Hill plus the Democrats being swept into power has made him the powerful chairman of the Senate Finance Committee. A new progressive era has given us a new President, and the time to pass meaningful health care reform is now. Those who worked their heart out to elect Barack Obama expect results – and the “public option” has broad support, even in conservative states like Arkansas. But Max Baucus is colluding with Republicans to say it’s not possible.

What would have happened if back in 1972, the editors of the Missoulian had advised young Max Baucus to run as a Republican? He might have still become a U.S. Senator, but today he would be a minority backbencher who takes his marching orders from Rush Limbaugh. He would be totally ineffective, and when health care reform hit the Senate floor he would be just another vote from the Party of “No.” West Virginia liberal Jay Rockefeller – who supports the public option – would be Chairman of the Senate Finance Committee (since he’s next in line.) We might have already passed a strong health care bill by now.

Instead, we have Senator Max Baucus – a Democrat because he was told in 1972 it would be more advantageous to get elected – holding up universal health care, and the private insurance industry is laughing all the way to the bank. When the U.S. Senate meets today, they should dump Baucus’ proposal – and in remembrance of Ted Kennedy, have a simple “up-or-down” floor vote on the Health Education Labor and Pensions (HELP) Committee’s plan. It’s the very least that our elected officials can do.