Why is Agrella defending ACCJC instead of CCSF? 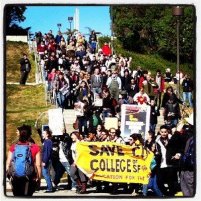 Readers who are following the crisis at CCSF know that the college has student success in the top 10% of community colleges but is under threat of closure by the Accrediting Commission (ACCJC).

Last week the Accreditation Group of the federal Dept of Education, in response to a complaint from American Federation of Teachers and others, sent a letter confirming that ACCJC was “out of compliance” in several areas in its review of CCSF. ACCJC violated federal regulations regarding composition of the review team (almost all administrators), conflict of interest and “due process”. The point about due process is especially significant.

This week is the deadline for CCSF to file its justification for a review of the ACCJC decision. The letter from DOE provides ample justification and is from the official body which oversees all accrediting agencies in the country. They are the highest authority.

Many people have naturally urged CCSF administration to use the DOE letter as the basis for its justification that a review of the ACCJC decision is needed. An article advising this was also posted here.

In response, the outside appointed Trustee Bob Agrella issued the following letter . Questions for Trustee Agrella follow his letter.

To: The College Community

Subject: Accreditation and the Review/Appeals Process

I would like to reaffirm my commitment to the college community that my sole purpose for being at City College is to work with you to maintain our accreditation.

Last week the Department of Education (DOE) informed the ACCJC of a number of items it believes the Commission needs to address. These items stem from the complaint lodged with the DOE by AFT 2121. The DOE’s letter has been widely circulated and any number of opinions have been expressed as to how the letter is to be interpreted and what actions the Commission must take to address the enumerated items. There are many individuals within the college who believe that the items in the DOE letter are sufficient reason to negate the show cause determination of the Commission with respect to CCSF. This has led to requests to me and Interim Chancellor Scott-Skillman that we use the DOE letter as substantiation in the college’s request within the review and appeals process of ACCJC to overturn the decision to terminate accreditation effective July 31, 2014. Compounding this entire matter is the fact that both Chancellor Brice Harris and I publicly stated that the review letter (due Tuesday, August 20, 2013) would be placed on the college’s website. However, subsequent to voicing this opinion we were informed by ACCJC that all materials submitted to ACCJC are to be treated as confidential. While both Chancellor Harris and I sincerely apologize for our premature comments regarding disclosure of the review documents, our intention was never to mislead the college community. Nevertheless, the error made regarding the confidentiality of the review materials has led to numerous emails demanding the review materials we provide ACCJC be made public. As previously stated, we cannot share the review documents because we have been clearly informed by the Commission that all parts of the appeal process, including the review, are to be treated as confidential.

I also want to inform the college community that for several reasons I have chosen not to use the DOE letter in our request for review. First and foremost is that the AFT 2121 complaint and the DOE’s letter are not representations of CCSF but rather deemed by the Commission and the college to be third party communications. If we were to use these arguments they would become the college’s official position and therefore the college would join in the attack on the Commission. I strongly believe that the best path to maintaining CCSF’s accreditation is to follow the Commission’s rules, regulations, and directions and to continue to show substantial progress toward meeting the eligibility requirements and standards. If our review document joins the attack on the Commission, I believe that the review and appeals process will be unsuccessful. If this is the case, I also believe our timeframe for meeting the standards may be significantly shortened.

Please understand that I am not trying to stand in the way of concerns about the Commission. I am dealing with the specifics of accreditation and the processes determined and articulated to us by the Commission. I believe that if the college changes direction and begins to attack the Commission, rather than working with it to correct the problems in the institution, it will jeopardize our ability to maintain accreditation. I understand that many of you may disagree with this strategy, but I believe the approach I have briefly outlined has the greatest likelihood of success for CCSF.
Although we may disagree on the strategy to be employed, the college community needs to be in total agreement to work together during these coming months to meet the accreditation standards.
Thank you.

QUESTIONS ABOUT THE ABOVE LETTER FROM SPECIAL TRUSTEE AGRELLA WHO HAS SUPPLANTED THE ELECTED BOARD OF TRUSTEES:

1) Why does Agrella minimize the findings of the Dept of Education Accreditation Group? DOE identified numerous ACCJC violations, said ACCJC was “out of compliance” and threatened “adverse action” (remove their authority). Agrella minimizes these violations as simply “items… to address”.

2) After promising to post the review justification for the CCSF community, so that everyone can see what they are saying, why is Agrella so quick to agree to ACCJC verbal instructions that “confidentiality” is required? Confidentiality is NOT specified in the written policies of ACCJC.

3) Agrella acknowledges there are differences of opinion but says he is going to decide without further discussion. How does he expect to have “total agreement” especially since he publicly has given up on the review?

4) Agrella says, ” I believe that if the college changes direction and begins to attack the Commission, rather than working with it to correct the problems in the institution, it will jeopardize our ability to maintain accreditation.” The highest authority on Accreditation has just determined that ACCJC is “out of compliance”. That is not an “attack”. The NACIQI report on accreditation has strong language highly critical of Accrediting Agencies including ACCJC.

Why is Agrella defending ACCJC instead of CCSF?