Why Harry Reid Must Go 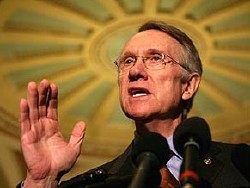 After Barack Obama takes the oath next week to become the 44th President of the United States, expect Republicans to raise every roadblock they can to block his progressive agenda. And if Nevada Democrat Harry Reid remains Senate Majority Leader, they will get away with it. San Francisco lefties like to complain about House Speaker Nancy Pelosi, but it is Reid’s ineffectual management of the U.S. Senate that poses the real risk at enacting change in 2009. Reid successfully led Democrats as Senate Minority Leader in 2005 at blocking George Bush’s Social Security privatization, but as Majority Leader has proven incapable at advancing an agenda – allowing Republicans to stall legislation at the mere threat of a filibuster. Reid (not the Republicans) decided that Democrats must have sixty votes in the Senate to get anything done, which could prove disastrous now that the public is counting on Democrats to implement change. If the recent shenanigans in the Senate around Joe Lieberman, Al Franken and Roland Burris have proven anything, it is that Harry Reid can’t be counted on to be an effective leader.

For the past fourteen years, I’ve had this recurring nightmare where Democrats re-take control of the White House and both houses of Congress – but nothing gets done. Why? Because just like in 1993, when Senate Republican Leader Bob Dole vowed to block everything that President Bill Clinton proposed, the Democrats prove incapable at facing determined opposition. Now, with House and Senate Republicans bitter and relegated to their minority status, we know what to expect from Mitch McConnell and his ilk. The only question is – what will Democrats do to prevent 1993 from happening again?

Yesterday, Reid issued a statement that Illinois Democrat Roland Burris – appointed by Governor Rod Blagojevich under odd circumstances – will be seated after all. This, despite Reid’s earlier pronouncements that the Senate would not accept any of Blagojevich’s appointments. All it took was for one conservative Democrat (California’s Dianne Feinstein) to publicly break with the Majority Leader, and Reid folded like a deck of cards. While some will argue that dragging on this issue longer was a distraction that Democrats cannot afford, it’s incredible that Burris will be seated before Minnesota’s Al Franken – who Republicans are still pushing to block, while Reid quietly complies.

“I want to play poker with Harry Reid,” said blogger Jane Hamsher – as she described his various blunders in the Roland Burris saga. Because Reid has repeatedly proven his inability to be a leader who can hold the Senate in line to frame the agenda. Now, as we move on to more pressing problems than just an Illinois Senate seat, Democrats need to seriously evaluate the wisdom of keeping Harry Reid at the helm.

In early 2005, when Reid first became Senate Democratic Leader, progressives praised his confrontational tactics with the Bush Administration. But even as Minority Leader, Reid exposed a tendency to let Republicans roll over him. He did not rally Democrats to stop the 2006 Military Commissions Act (which gave Bush the authority to use torture based only on suspicions, not evidence), and he failed to wage filibuster attempts against two right-wing appointments – John Roberts and Samuel Alito, who now each have lifetime appointments to the U.S. Supreme Court.

Reid didn’t filibuster the Court appointments, he said, for fear that Republicans would retaliate by using the “nuclear option.” Such a maneuver would have killed the 60-vote requirement to end debate in the U.S. Senate, relegating Democrats to silent minority status. Reid wouldn’t call their bluff – sensing that Republicans might actually do it.

It’s understandable to sometimes hold your fire when you’re in the minority – because when push comes to shove, the other side can always out-vote you. But now as Majority Leader, Reid continues to play the same game of excessive caution. Democrats have complained that Republicans since 2006 have threatened to use the filibuster far more often, and statistics certainly prove that the G.O.P. has shattered all records in Senate history.

The operative word, however, is “threats.” When people uses the term “filibuster” to talk about the Senate, it hearkens back to the 1950’s and 60’s – when conservative Southern Democrats hell-bent on stalling civil rights reform would refuse to give up the floor, as they read from the phonebook for days on end. Such dramatic flair could exhaust the majority into submission, but it also carried a heavy price. If overused, bad publicity would eventually drive the obstructionists to fold – which is why it rarely happened.

But if you’re in the minority – and you can block legislation without having to actually go through the risky prospect of a full-scale filibuster – wouldn’t you do it all the time?

Harry Reid is the first Majority Leader in history to say we need sixty Senators to bring anything to a vote – as the mere threat of a filibuster can stall legislation. “Republicans are filibustering more and more often because they can get away with it,” said Nate Silver, as he analyzed the historical data.“If Reid can’t get them to pay a greater public price, then the Democrats ought to find somebody else who can.”

Just like Minoirty Leader Reid never called the Republicans’ bluff on using the “nuclear option,” Majority Leader Reid still hasn’t called their bluff on threats to filibuster. With Republicans shut out of power in the executive branch and the House of Representatives, they have no choice but to keep playing obstructionist in the one place where it has an impact. If Reid pursues the same approach in an Obama Administration, the Senate will quickly gain a reputation as the place where progressive legislation goes to die.