Why are Progressives Bashing MoveOn? 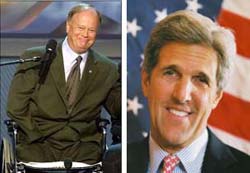 What do the progressive Nation magazine and the Berkeley Daily Planet have in common? Both wrongly criticized MoveOn.org’s “General Petraeus Don’t Betray Us” advertisement, the one that many Democrats joined with Republicans in condemning in a U.S. Senate resolution. Although many are tired of debating this ad, it is troubling that even Daily Planet editor Becky O’Malley, usually a very clear thinker on such matters, has reached factually inaccurate conclusions. The notion that U.S. opinion was swayed by an ad that 99% of voters never saw, and that MoveOn’s ad “drove the substantive problems with (Petraeus’) report off the front page,” is simply false. And media coverage has conveniently ignored malicious Republican attacks on the patriotism of soldier/ senators John Kerry and Max Cleland. Most Americans likely do not even know who Petraeus is, and many would likely assume he is a linebacker for an NFL team.

Here’s what I don’t understand about progressive criticism of MoveOn.org’s now notorious ad: there is no evidence anywhere that it tiled public support toward General Petraeus, or that a New York Times ad is even capable of causing a meaningful shift in public opinion.

Are progressives so isolated that they believe most Americans wake up each morning to the Times? Have progressives not read the recent studies showing the sharply declining number of U.S. residents reading any newspaper?

Recall that after the Republican-funded multimillion dollar media campaign to boost Petraeus’ standing concluded, polls showed the public unswayed. And public interest in the General’s testimony was deemed so light that morning soap operas were not even preempted, as occurred for days during the Iran-Contra hearings in 1987.

Some progressives have not learned that you can’t let your adversaries determine your tactics and strategies. Yesterday the House passed a resolution condemning MoveOn, after the Senate had done so last week. If Republicans had not found the MoveOn ad as a route to try to divert attention from our failures in Iraq, they would have used something else.

And the traditional media would have fully cooperated.

Consider that in the entire MoveOn imbroglio, this media avoided noting the Republican attacks on John Kerry’s Purple Hearts. Wasn’t that a greater offense to the military than an ad urging a General to tell the truth?

Nor did the media remind readers and viewers about the Republican attacks on the patriotism of then Georgia Senator Max Cleland. Here, we had Republicans maliciously denouncing a soldier who lost his legs in battle, comparing him with Osama bin Laden—-that’s much worse than a MoveOn ad that had no adverse impact on anyone’s career.

Wonder why the media did not put the Petraeus ad in the context of the Kerry and Cleland attacks? We’re not dealing with an even media playing field here, and fortunately MoveOn understands this far better than its critics.