Where’s the Truth When You Really Want Some to Read?

by Ken Werner, Trinity Plaza Tenants Association (TPTA) on May 31, 2006 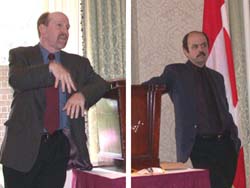 Sunday is typically a catch-up day for reading for me since I frequently fall behind in following stories because I do my research during the week as well. By 3 pm I’ll start writing for an article for Monday if I plan on publishing, but I had previously decided not to bother responding to divorce lawyer/estate planner for the rich Tilden Moschetti’s letter to Beyond Chron since it was an emotional outburst to support his friend. So this Sunday I decided to continue researching a lengthy series I’m planning in a few months, and I went to the Chronicle to continue my endeavor. Well, I didn’t even make it to the first search when I spotted Matier & Ross’ “Mayor’s current idea: Catch a wave to make power.”

The gossip columnists praise God Newsom for initiating same-sex marriages and universal healthcare, contrary to the facts. As Rachel Gordon noted on August 15, 2003, “This week the board voted 8-0 to give initial approval to a bill by SUPERVISOR CHRIS DALY that would require the city to recognize domestic partnerships, civil unions and same-sex marriages that were lawfully entered I to elsewhere.” As for universal healthcare, excuse me, but wasn’t it the Honorable Tom Ammiano who got the ball rolling on the greatest concept since the invention of the wheel?

Matier & Ross tout Newsom as the creator of the concept of wave power. These guys are masters of escaping the facts. It’s not until paragraph 8 that … oops … it was really former Board President Matt Gonzalez (framed as “Newsom’s archnemesis”) who initiated the concept of using clean, renewable wave and/or tidal (naturally occurring) energy as a means of powering San Francisco.

So where’s the truth when you really want some to read? It seems that the truth doesn’t exist in the pages of the Chronicle, or the Examiner. To the contrary, when it comes to letter writing, both destroyers of trees attempt to feed San Franciscans on an unsustainable diet consisting of arguments extracted from the Republican Playbook. Or, to phrase it in simple terminology, the right-wing financial supporters are attempting to brainwash San Franciscans that “Democrat” or “Green” are bad and “Republican” is good. Now, if you want to apply a little religious philosophy here, you could say the tongue of the Devil is spewing it’s lies, and San Franciscans are being force fed with deception intent on undermining the City’s political fabric.

But let me narrow this down a little. I’ve been accused, several times, but most recently of “acting as a mere mouthpiece for Chris Daly.” Given the published crap that’s been appearing recently in the Chronicle and Examiner regarding Defender of the Disenfranchised Daly and his fellow progressives, San Franciscans NEED to hear the truth. Right now, the right-wing fanatics are spewing their distortions of the truth in an attempt to sell City residents a bill of goods designed to favor the rich and infamous. According to the right-wing spin, universal healthcare is a bad idea because it will hurt businesses and cost jobs, unless the idea originated from Gavin “Republican Lite” Newsom. A raise in the minimum wage gets the same perverse treatment — raising the minimum wage will hurt businesses and cost jobs. And the “Hail Mary” lawsuit’s defense of Prop I is good for the people of the City; if Prop I isn’t followed to the letter, it will hurt businesses and cost jobs. Blah blah blah.

And with each defense offered by the Chamber of Commerce and their cohorts, it’s Chris Daly who’s hurting the City; or it’s Tom Ammiano or Aaron Peskin who are hurting the City. According to the fanatics who represent the financial top 1% of the country’s population, Daly et al. are anti-business, or anti-homeowner, or anti-democracy, or anti-whatever if their acts aren’t based on The Teachings of Frank Luntz.

But what’s really disturbing here is that you won’t hear a right-wing extremist claiming that presenting only the Republican point of view is detrimental. To the contrary, Luntz’s Playbook insinuates that the Republican position is to control the media. With that concept in mind, let me expand on my question of “where’s the truth…?”

What Daly critics are really saying is that only the right-wing point of view should be printed, and anyone who defends the Honorable Daly (and his progressive colleagues) is “acting as a mere mouthpiece.” In other words, the right-wing rags are attempting to frame progressive policies as fringe ideas that will “hurt businesses and cost jobs.” This falls under the realm of CENSORSHIP, and that’s exactly what the Chronicle and Examiner are doing — indeed, in the past two weeks of the Examiner there has only been ONE letter (from fellow Move-On member Lee Goodin) supporting the progressive point of view on Aaron Peskin’s gross receipts tax ballot measure.

In 1961, the late Republican President Dwight D. Eisenhower delivered his farewell address warning of the military-industrial complex that could subvert freedom. In this new millennium, we need to beware of the Republican-Big Business complex that not only is attempting (and has succeeded with the Patriot Act) to destroy civil liberties but to destroy the very constitutional democracy that has existed more than 200 years. Attempts to control media, to silence the voices of defenders of our democracy, must be fought with dedicated passion. As someone who studied broadcast journalism, I have a responsibility to present the point of view that the Republican-Big Business complex would rather crush.

To those who wish to deny my first amendment right to freedom of speech, be forewarned, later this week I intend to be the “mouthpiece” of the Honorable Tom Ammiano.

Where’s the truth when you really want some to read? Here.

(Ed note: Even the usually on-target Chronicle business columnist David Lazarus gave Newsom credit in his Sunday column for “seeking to make universal health care available to all residents.” But as Werner notes above, it was only after Supervisor Ammiano introduced his measure to charge businesses for health care that the Mayor formed a task force to address the issue. And whereas Ammiano’s plan had a certain funding source, Newsom’s plan does not)