Where is the Progressive Candidate in San Francisco Mayor’s Race? 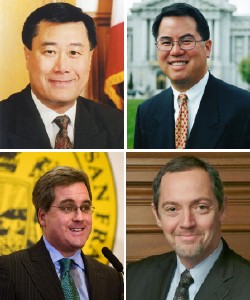 The Board of Supervisors selection process for an interim mayor has overlooked a far more critical issue: the lack of an identifiably progressive candidate for the November’s mayor race. None of the current field of Leland Yee, Dennis Herrera, Bevan Dufty and Phil Ting excites the grassroots activist base as did Tom Ammiano in 1999 or Matt Gonzalez in 2003. Nor can any be clearly described as the “leading progressive” in the race, as Art Agnos was in 1987. Why is there no prominent progressive choice? Is the problem that the progressive supervisors first elected 2000 produced no viable mayoral candidate for 2011 other than Gonzalez? Do the progressive supervisors elected in 2008 currently lack sufficient citywide name recognition or support? Or are enough progressives satisfied with the current field so that there is not enough space for a new candidate? Here are my thoughts.

The San Francisco Board of Supervisors will soon select a caretaker mayor, preventing the selection of a progressive interim mayor who would have a leg up on the competition for November. Now the question turns to November, as nobody with strong progressive roots is either in the field or openly soliciting support for the race.

While Leland Yee is popular among public employee unions and has been actively cultivating progressives, he consistently backed real estate and landlord interests while serving on the San Francisco Board of Supervisors. He has also been among the most pro-landlord Democrats while serving in the Assembly and Senate.

Considering that tenant and real estate issues are the most common dividing line between San Francisco’s “progressives” and “moderates,” Yee fits no prevailing definition of a “progressive” mayoral candidate.

Dennis Herrera’s views on many issues are unknown, as his role as City Attorney has limited his public advocacy. While progressives who know him believe he would be a progressive mayor, he has spent his professional life as an attorney, not as an activist publicly working for progressive causes.

At this point Herrera is clearly not a candidate that the young activists who worker hard for Ammiano and Gonzalez are excited about. And he is not personally well known among progressives outside the gay and lesbian community.

Bevan Dufty has never been considered part of the city’s progressive base. And while Phil Ting espouses progressive views, his political career was launched by a Gavin Newsom appointment to the Assessors post, and he is unlikely to galvanize a broad coalition of progressive activists to his campaign.

In 2003, Matt Gonzalez concluded as the filing deadline approached that neither Tom Ammiano nor Angela Alioto (both of whom had progressive support) could defeat Gavin Newsom in the mayor’s race. Gonzalez had spent months trying to recruit progressives he thought could win, and when this failed, entered the race on the eve of the filing deadline and came remarkably close to winning.

In 2007, Chris Daly was so intent on getting a progressive challenger to Mayor Newsom that he held a mayoral convention to recruit (some would say force) such a candidate into the race. But no candidate came forward, which was understandable given the challenge of defeating a popular incumbent.

With no incumbent in the 2011 race, will a progressive not currently in the field eventually enter the race? Let’s look at the prospects.

I previously wrote that if any current progressive Supervisor wanted to run for mayor, then the new Board could make that candidate the interim mayor. But I wrote that before the mayoral selection process became so tainted that even current supervisors considering a November run prefer to do so without the interim mayor baggage.

David Chiu is the only current supervisor who is reportedly looking into the mayor’s race. Let me emphasize the term “reportedly,” as he has not conducted the type of meeting process that one expects from someone seriously considering such a campaign.

To run a strongly competitive mayor’s race Chiu or other progressive members of the class of 2008 must overcome a pattern that applies to every San Francisco mayoral election since at least 1975: voters want a candidate who they know. George Moscone, Dianne Feinstein, Art Agnos, Frank Jordan, Willie Brown, Gavin Newsom – the first five were prominent San Franciscans with long histories of service, and while Newsom served on the Board for seven years prior to running for mayor, its likely that voters lack of familiarity with him contributed to his surprisingly narrow victory.

Does Matt Gonzalez almost winning in 2003 after first being elected in 2000 refute my familiarity thesis?

Gonzalez had the unique benefit of a highly functioning local Green Party whose citywide activist base went all out for his campaign. He also had run for District Attorney in a high-profile race, and had a special blend of personal skills that led many who disagreed with him on issues to nevertheless support his campaign.

No current progressive supervisor has either a long history of citywide service or an activist base ready to work fulltime on their mayoral campaign. This could emerge, but district elected supervisors are less familiar to voters citywide than many realize.

Instead, Peskin made the politically inexplicable decision to alienate his core Chinatown base by not co-endorsing Kim, and then burned bridges by using the resources of the Democratic Party to defeat her. Peskin moved all his chips to the center of the table on behalf of two candidates he knew were unlikely to win, and lost his bet.

Given the field and dynamics, is there not a progressive woman who could burst into this all-male field and win in November?

Oakland’s Jean Quan saw such an opening, and she and Rebecca Kaplan came out of nowhere to challenge and ultimately defeat the city’s overwhelmingly male power structure. San Francisco’s 2011 mayoral election may provide a similar opening.

For progressives understandably concerned over the lack of a mayoral candidate with roots in the activist community, consider this: in January 1987 and 1991, few thought Art Agnos or Frank Jordan would win the fall mayoral election. In January 1995, many doubted that Willie Brown would be willing to walk the streets and mount a serious mayoral campaign. In January 2003, Matt Gonzalez was recruiting others and rejecting any interest in running for mayor.

The history of San Francisco mayoral races shows that its still early, and much can change. But those dissatisfied with the current mayoral field should start talking to preferred candidates, or at least discussing with others about who could galvanize a progressive grassroots campaign.

Randy Shaw is Editor of Beyond Chron. He recalls being told by Supervisor Harry Britt in early 1987 that Art Agnos had not started his campaign in time and that Jack Molinari would be our next mayor. Agnos went on to win 48% in the general election, and 70% in the runoff.