When Did Iraq Stop Being an Issue? 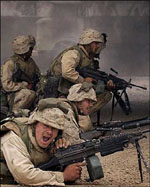 In 2006, Democrats took back Congress because Iraq played a prominent role in the mid-term elections. But two years later, exit polls say that voters are basing their decisions on the economy and health care – with Iraq barely making a blip. It’s not like the deeply unpopular War is no longer an issue: 1,783 days after George Bush declared “Mission Accomplished,” we are still stuck in a quagmire that has cost $500 billion and has taken more American lives than the 9/11 terrorist attacks. But Hillary Clinton hasn’t been hurt much for her past support of the War, and John McCain’s suggestion that we may be there for 100 years has not disqualified him as a total nutcase. If Iraq does not become a political issue in 2008, we may still be there for a very long time. And if Democrats want to win the White House in November, they have no other choice but to bring it up.

It’s too simplistic to merely conclude that the Democrats “failed us” in getting out of Iraq. Of course the Congressional majority made some fatal mistakes, but the vast majority of Republicans who stuck with George Bush are also to blame. After Nancy Pelosi saw that they didn’t have the votes in Congress to end it, the War kept on going – and momentum was sapped to keep pressure on these obstructionists. November 2006 should have been a turning point in ending this catastophe, but two years later we are still there – with 4,000 Americans killed.

I am now convinced that the trouble started in January 2007 when Democrats did not aggressively oppose the so-called “surge” – an unconscionable escalation of 21,000 troops. George Bush announced it right after Republicans lost Congress – and at the time it seemed like a politically tone-deaf thing to do (not to mention morally repugnant and offensive.) But Bush never has to face the voters again, so he didn’t care what other people felt. In the end, Bush got the last laugh – and the “surge” made it politically difficult to really end this War.

By January 2007, the War had already dragged for four years – and many activists were suffering from outrage fatigue. While there were protests against the “surge,” the turnout did not match what it should have been; while people were angry, there was no sense of urgency. In Congress, the only thing Democrats could do was pass a pitiful “non-binding resolution” – but did not tie the President’s escalation with the purse strings or a withdrawal date. If the Democrats deserve blame, it’s that they were not sufficiently aggressive at the outset.

But in March 2007, Speaker Nancy Pelosi and the Congressional leadership finally got some spine –and passed the Iraq Budget with a firm date to get out. While the bill kept funding the War, this was the first time a majority in Congress told the President to get us out of Iraq, and tied it to their power of the purse. This caused a showdown with Bush, and made withdrawal a top issue in the Presidential race. Democrats, with the public clearly on their side, campaigned heavily on it – and it finally looked like progress was coming.

However, as we all expected, Bush vetoed the legislation. Democrats tried to recruit Republican members to override his veto, but the minority was too wedded to a failing Administration to do the right thing. John Edwards used his bully pulpit as a presidential candidate and urged Congress to stay firm – but that was clearly not enough. In the end, “support our troops” was too overbearing a slogan for 86 House Democrats to withstand – and so the War proceeded with no end in sight.

Like most Democrats in Congress, Senators Hillary Clinton and Barack Obama voted against the “blank check,” but they were running for President – and so were accountable to overwhelming public opinion. But they were just two votes, and a majority of their colleagues did not stand firm on ending the War.

By not aggressively opposing the “surge” in January when it could have made a difference, enough Democrats were left in May with the dilemma of backing down – or making the President de-fund troops who were already there. It was a choice that disillusioned the American public, and waiting for September proved to be another fatal strategy. By October, Pelosi was left to admit that Congress had failed to end the War.

Meanwhile, Congressional Republicans – who should have been crucified for siding with the President and letting the War continue – got away with few consequences. Today the War is unpopular even in conservative parts of the country, but Republicans who went along did not get hit where it should: through primary challenges for their own re-election. Meanwhile, the few Republicans who supported withdrawal did get primaried. And in the case of Rep. Wayne Gilchrest of Maryland, he was defeated.

By the end of 2007, Congress had failed to end the War and Republicans had not suffered political consequences for their blatant obstructionism. The public was resigned in defeat that we were not going to leave Iraq before 2009 – and so there was no sense of urgency. Clinton and Obama kept campaigning against the War, but without Congress taking up the issue their talk was only rhetoric. Meanwhile, George Bush was left gloating that a President Hillary Clinton would actually keep us in Iraq.

While the War remains deeply unpopular, it has not played the role in 2008 election that it should. Clinton has escaped accountability for initially supporting the War – by taking similar positions to Obama on getting out of Iraq. Obama has stressed his “judgment” on having always opposed the War – which is why people should trust him more – but his voting record since coming to the Senate has been similar to Clinton.

Since Congress admitted its failure to end the War, everyone knows we’ll still be there by 2009 – so there has been little news development to keep the issue in the public spotlight. If California had placed an Out-of-Iraq referendum on the February ballot (like our leadership in Sacramento was supposed to do), things could have been different. But it didn’t happen. Instead, voters decided on Clinton v. Obama on issues like health care and the economy.

Worse is how this void has slowly shifted public opinion in favor of the War. “While Clinton and Obama trade blows,” wrote Arianna Huffington, “the Republicans are slowly winning … Along with McCain, who says the ‘surge is working’ at almost every campaign stop, we can thank the media for this shift. In the past seven months, there has been an 80 percent reduction in the amount of coverage devoted to the war. And this lack of attention has taken a profound toll.”

Iraq did have a noticeable impact in at least one presidential primary: Vermont. Obama won the March 4th primary there by a landslide, despite the fact that the electorate was heavily women and seniors – which would normally favor Clinton. “While [the War] has fallen in importance among voters in other states,” said Bill Schneider of CNN, “Vermont voters ranked it nearly as important as the economy. And those who said it was their #1 issue favored Obama by nearly three to one.”

Meanwhile, some Democratic candidates for Congress are doing their best to bring Iraq back into the spotlight – by presenting their plan to end the War. Darcy Burner of Washington, Donna Edwards of Maryland, Eric Massa of New York, Chellie Pingree of Maine, Jared Polis of Colorado, Tom Perriello of Virginia and others will unveil their collective plan today at the Campaign for America’s Future Take Back America Conference in Washington DC.

“I know the media keeps insisting that nobody cares about Iraq anymore,” said Burner, who is trying to unseat Republican Dave Reichert in the Seattle suburbs after almost doing so in 2006. “But when I talk to voters in my district, they don’t seem to have gotten the memo. Instead, they almost always ask as one of their first two or three questions, ‘How are you going to end the war in Iraq?’ I thought it might be a good idea to give them a real answer.”

With Congress having failed to get us out, it’s up to candidates – and the people – to bring the issue back to the forefront. Because the stakes are simply too high.

EDITOR’S NOTE: In his spare time and outside of regular work hours, Paul Hogarth volunteered on Obama’s field operation in San Francisco.