What Will Progressives Do About the Mayor’s Race? 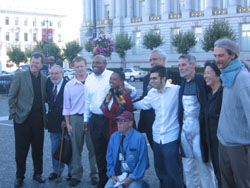 As Gavin Newsom’s 13 opponents gather tonight for the second weekly “minor candidates” forum, how will progressives deal with the Mayor’s race? None of the challengers have a chance of winning and few can wage a strong campaign, but most are running on a progressive platform. Supervisor Chris Daly and BART Director Tom Radulovich have endorsed Quintin Mecke, but none of the other elected officials I spoke with are ready to get behind a candidate. The Green Party recommended four candidates (but did not endorse), and the Harvey Milk Club is scheduled to vote on endorsements Tuesday. Candidates must raise $25,000 by August 28th in order to get public financing, which will indicate if anyone is viable. Regardless of the outcome, progressives must focus on an issue-based legislative agenda for the upcoming year – and plan for the Board of Supervisors races in 2008.

“I’m not playing the endorsement game,” said Supervisor Tom Ammiano. “I love them all, but I really like Quintin Mecke.” That appears to be the consensus among most of the City’s progressive leadership – besides labor unions, which have generally endorsed Newsom.

Supervisor Chris Daly, who organized a Progressive Convention in June and stressed the need to field a challenge to Newsom, has endorsed Quintin Mecke. “He has a long track-record of advocating for issues that are important,” said Daly, including public safety and city planning.

Matt Gonzalez and the partners at his law firm have cut $100 checks for six of the Mayoral candidates – Dr. Ahimsa Sumchai, Lonnie Holmes, Quintin Mecke, Chicken John Rinaldi, Josh Wolf and Tony Hall. But Gonzalez was quick to point out that these donations are not meant to be endorsements.

“It’s a very small token of support,” said Gonzalez. “You have to respect the fact that they are out there – and that they are by and large championing the issues. To the extent that they’re talking about public health, public safety and the arts, I want to support that. I know how hard it is to raise money and get the threshold for public financing.”

At its August 18th meeting, the Green Party decided not to endorse any of the candidates. However, they did vote to recommend four of them: Lonnie Holmes, Josh Wolf, Ahimsa Sumchai and Quintin Mecke. A “recommendation” will give these candidates the same access to Green Party resources that an endorsement would bring.

BART Director Tom Radulovich has also endorsed Mecke. “I’m not happy where we are as a city,” he said, “and we need change. I’ve been following what’s going on with Muni – and it’s troubling me. Policy concerns don’t rate highly at City Hall. Quintin has a good grasp on the issues, and a great track record as an advocate. I want somebody out there who shares my values.”

Other elected offiicals are staying out for now. School Board member Jane Kim said that she needs to hear more from the candidates, and Aaron Peskin’s aide confirmed that the Supervisor is not taking a position. Supervisor Ross Mirkarimi was not available for comment.

“There’s good people running,” said School Board member Eric Mar, “but nobody has a chance. None have the ability to really mobilize a grass-roots campaign that Daly, Mirkarimi, or Gonzalez would have done. No one in the race can really unite a broader progressive movement. So most of us will be challenging Newsom on the issues.”

But while most progressive electeds are not endorsing a particular candidate, they’re not voting for Newsom either. “I think progressives should vote for someone,” said College Board member John Rizzo, “just to show that Newsom is not the end-all and be-all. You should vote for anybody just to lower Newsom’s percentage.”

None of which is a resounding endorsement for any of the candidates. Progressives are willing to cast a protest vote for somebody – and in some cases even endorse a challenger – but the overall feeling is not to take the Mayor’s race too seriously, for we will all still be here after November 6th.

We will also know if anyone raises $25,000 by Tuesday to get public financing – which most doubt will happen. “Absent candidates showing viability,” said Gonzalez, “my focus is whether any of them are raising issues that should be raised.” If a protest candidate raises issues that add value to the dialogue, it could be worth it. But issues are not enough – you also need a base to mobilize.

After the Progressive Convention failed to produce a viable candidate, Randy Shaw wrote that progressives should hold an “issues” convention. Regardless of what happens with this year’s candidates, formulating a coherent legislative agenda can help progressives come together – and help make the City a better place.

Because progressives need to be prepared for the Board of Supervisors elections in 2008.