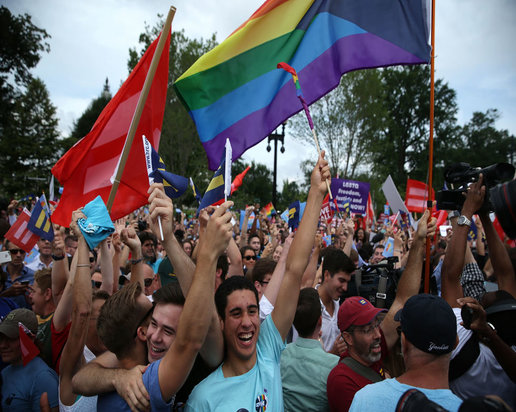 When a movement for progressive change win such a mammoth victory as has occurred with gay marriage, we must ask what other campaigns can learn from this success.

Unfortunately, the parallels between the two movements diverged in the courts. Republicans got a conservative federal judge and then the right-wing 5th District Court of Appeals to stay Obama’s Executive Order, denying undocumented immigrants legal protections pending Supreme Court review.

Still, both the gay marriage and immigrant rights movements combined grassroots activism and electoral clout to win historic gains. The Supreme Court legal victory would not have occurred without the marriage equality movement proving its support on the ground.

On the same day as the gay marriage ruling, President Obama gave a eulogy for the ages in Charleston. It raises the question: why did momentum for gun control stall while support for gay marriage expanded exponentially?

It’s not because elite and corporate interests favor gay marriage. These same interests also favor stronger gun controls yet this has made no difference.

I think the problem is that there is no grassroots gun control movement. I’m not even sure there is any “movement” to strengthen gun restrictions.

But whereas gay marriage and immigrant rights activists were completely focused on their goal, we don’t see many activists dedicating each day to enacting new gun restrictions. And until that happens, nothing will change.

One reason is that abortion rights don’t directly impact men. Another is that the conservative base since 2009 has prioritized banning abortion over restricting gay marriage.

That being said, the grassroots movement to stop restrictions on a woman’s right has nowhere near the mobilizing power that the marriage equality movement reached prior to last week’s ruling. Abortion rights activism has diminished in the past decade, as activists focus on other issues.

That marriage equality was ultimately won by a court decision should not distract from the centrality of its grassroots organizing. As my former Beyond Chron colleague Paul Hogarth foresaw in June 2012, winning electoral fights over gay marriage that November gave the movement “an opportunity to make history.”

History was made in four states that November and the marriage equality never looked back. In a perfect world these electoral victories in Minnesota, Maine, Maryland and Washington should not have impacted the Supreme Court’s constitutional legal analysis, but we do not live in such a world. Supreme Court rulings have long taken public attitudes into account, and these November 2012 electoral victories enabled the judges to feel more comfortable moving forward.

The lesson is simple and cannot be repeated enough: grassroots organizing is the key to progressive campaigns. It is no coincidence that the Fight for 15 and efforts to increase the minimum wage also built a strong grassroots base, which is why they join marriage equality as a successful progressive movement.