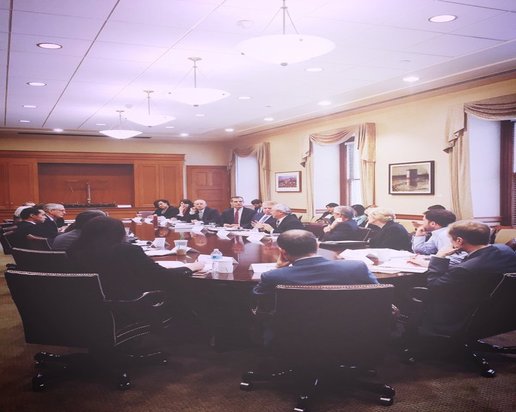 Mayors from five West Coast cities today announced the creation of an alliance of West Coast mayors united in addressing the growing crisis of homelessness.

The alliance was developed during the first West Coast Mayors Summit, a two-day convening of mayors from Portland, Seattle, Eugene, San Francisco and Los Angeles to discuss pressing issues affecting each of their cities: homelessness, housing, and climate action.

“Up and down the West Coast we are facing a crisis of unaffordability in housing,” Mayor Hales said. “Each of our cities has taken unprecedented steps to respond to the urgent issues of homelessness and housing affordability; in Portland, for example, we opened a shelter for women in just over one month. But we need federal support to address root causes and help protect our most vulnerable community members.”

The West Coast Alliance of Mayors will be a bipartisan coalition working to raise awareness of common issues. First on the agenda is elevating the importance of homelessness and housing in their communities and among their federal delegations. It would be committed to data collection and sharing — getting the right data for the West Coast — and sharing of best practices.

“We have come together today to rally around a common crisis that impacts everyone in our community and with thousands of residents demanding our leadership,” said Los Angeles Mayor Eric Garcetti. “In Los Angeles we are pursuing all avenues to address our homelessness crisis, and as result we have housed more than 11,000 people in the last 23 months, including more than 5,500 homeless veterans but there is still so much more to do. This new alliance allows us to share new strategies to tackle this and other critical issues. It also gives us a platform to amplify our collective voices to demand the resources we need from our federal partners to solve this crisis once and for all.”

Following discussions with U.S. Secretary of Housing and Urban Development Julián Castro and Matthew Doherty, Executive Director of the U.S. Interagency Council on Homelessness, the mayors asked for the federal government’s full partnership in their efforts. A joint statement from the mayors seeks support from federal partners to increase funding for affordable housing development; increase funding for rent assistance and supportive services for homeless people; and increase the flexibility of federal regulations so that programs can better meet the unique needs of each city.

“Too often cities are forced to backfill state and federal cuts,” Mayor Murray said. “In Seattle, local resources represented less than 40 percent of the total funding for homelessness services a decade ago. Today, we are now responsible for over 60 percent of homelessness investments. Untreated mental health and drug addiction has finally resulted in a human crisis seldom seen in our history. As West Coast mayors, we stand united in calling for a reengaged and vigorous effort by the federal government. Cities cannot solve a national crisis by themselves.”

During the day’s discussions, each mayor identified strategies and programs that are working in their communities to address street homelessness, veterans’ homelessness, and housing affordability.

“In Eugene we are close to meeting our goal of housing 365 veterans in in 2015. This is a direct result of new federal resources, such as additional vouchers to assist with housing costs and grant funds to support housing stability,” said Eugene Mayor Piercy. “Given these and other successes in our region, we are asking that the same federal policy and financial support be directed toward all individuals experiencing homelessness.”

The West Coast Alliance of Mayors will institutionalize data collection and information exchange, supporting a shared federal agenda. West Coast mayors involved in the summit will take what they have learned to the U.S. Conference of Mayors conference in January.

“As mayors of West Coast cities, we share a commitment to do everything within our power to address the growing crisis of homelessness and housing affordability in our communities,” said San Francisco Mayor Ed Lee. “Without a doubt San Francisco has changed many lives for the better. We have pioneered models of care like the Navigation Center that provides every service needed in one place. We are grateful for the level of support we have received from our Federal partners, including HUD and the US Interagency Council on Homelessness, and the exchanges with other West Coast mayors on best practices to address this crisis. All of us are called upon to do more, and we look forward to overcoming the growing challenge of homelessness together with compassion and care.”