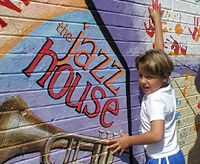 In 2002, Rob Woodworth opened The Jazz House, a non-profit community music venue located in Berkeley. The Jazz House provided a home for the wayward: a regular venue for artists on the fringe and homegrown soon-to-be’s whose performance outlets remain preciously few. Young local musicians attended classic-era “get up on the stand and play” jam sessions and, in some cases, found themselves opening for headliners, while patrons were admitted on a sliding scale.

Yet now, this vital institution that both promoted burgeoning talent and fostered a musical community is without a home. Serious roadblocks exist to setting up shop permanently anytime soon. The most important one: a location in San Francisco or the East Bay willing to open it’s arms to The Jazz House.

Having a permanent home for this venture is an essential consideration for Woodworth. “I don’t want to be one of those people who’s running his operation underground, someone who’s basically squatting somewhere,” said Woodworth.

“Because of the kids’ involvement I want everything to be legit.”
The Jazz House’s former unassuming exterior (a lone blue light bulb emerging from a wood-panel facade) did not so much as sport a poster declaring its presence, mission or desire for your solicitation. Yet the incognito front seemed to serve the Jazz House’s escalating appeal as everyone from European free jazz pioneers to seven-year-old saxophone prodigies graced the stage and began filling a heretofore unknown void in the music community.

“I just thought, well, I’ll put on shows two nights a week and see what happens,” said Mr. Woodworth on a rainy Saturday morning at Oakland’s Mama Buzz Cafe. “All of a sudden we’ve got all these kids in there on a Tuesday night just blowing everyone away. I’ve got Erik Friedlander [New York-based cellist] calling me up asking me when he can come back.”

Professional musicians do not expect audiences to listen closely. Young artists just realizing their talents do not expect to be taken seriously. The Jazz House was a place where conventions were inverted. While art in the United States continues to be run down an alley of commerce and subterfuge, here was a truly unique haven to remember and express the ideals that are at the foundation of creativity.

A haven, that is, until the honeymoon ended sometime last Fall, when The Jazz House lost their lease at the Adeline location. A small performance space next door to a police station, Woodworth took over the lease and established a home for Jazz House after the previous renter wished to rid himself of the day-to-day operations of running a building. At the time, the landlord had no immediate plans to sell the space.

“There was no telling when that rug was going to be pulled out,” said Woodworth. “But it just so happened that it was pulled out just at the height of everything.” Without any overt malice the owner sold the space, leaving Woodworth with only one option to continue Jazz House – to host it out of whatever willing locale he could find, like 21 Grand and the Berkeley Fellowship Hall, while continuously seeking a new permanent home he could establish in San Francisco, Berkeley or Oakland.

Here’s the rub: funding this venture independently and working with modest voluntary support, Mr. Woodworth has encountered many snags in opening a new space, particularly in terms of the expenses involved in meeting city ordinances for large occupancy establishments.

Getting a building up to code, Woodworth discovered, can cost as much as $80,000 in San Francisco. Of course, most small-time venues pay their bills with alcohol sales, not ticket revenue. But The Jazz House, so that they may never have to close their doors to those young in years but musically curious, forgoes the sale of alcohol at its events.

“Nothing against alcohol,” laughs Mr. Woodworth, “but that’s just not the business that we’re in.”

Indeed the business choices that The Jazz House makes – no alcohol, unconventional and even challenging music, and a sliding scale admission policy – defy most conceptions of running an entertainment-based establishment. But it is his commitment to these ideals that makes The Jazz House what it is and what attracted so many to his hall in the first place.
“When I first started this, people would say, ‘How are you going to pull this off? Yoshi’s is going to eat you alive.’ Well, Yoshi’s isn’t my competition,” said Woodworth. “Television is, The Bachelorette is. People need something else and that wasn’t even apparent until I started The Jazz House.”

Woodworth remains positive about a future for Jazz House and is open to the possibility of corporate sponsorship, “I wouldn’t mind letting Coca-Cola come in and advertise. As long as it isn’t too garish and as long as they understand what we’re about and we’ll have the freedom to do things the way we’ve been doing them, that’s fine. It’s not about being a successful business, it’s about being able to do this.”

Certainly this venue is a vital resource for our community, as essential to our civilization and indicative of our culture as a school, a library or a park. The Jazz House’s proven success as a community-building venture leaves it incumbent upon the officials of the City of San Francisco and other Bay Area locales to consider funding a space for its continued existence. Barring that, those interested in keeping The Jazz House alive should look to their rich friends and petition them to consider this cause and contribute in any way they can.

“Kids come up to me and they ask me, ‘When are you bringing it back? When do we get to play again?'” said Woodworth. “I can’t tell them about building codes or leases. That doesn’t make any sense to them. They just want a place to play.”
Find out more at www.thejazzhouse.org or contact rob@thejazzhouse.org