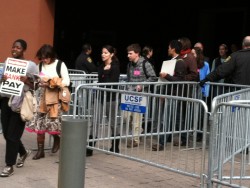 On Sunday, Governor Brown vetoed California Senate Bill 259 – legislation that would have extended to 14,000 graduate student Research Assistants (RAs) basic rights already held by all other UC employees – including the freedom to form a union. “We thank the strong majorities in the Legislature that voted to extend basic workers’ rights to RAs. With his veto, Governor Brown has sided with the Wall Street elites that are running UC for their own gain. Without union rights, RAs like me don’t have guaranteed family medical leave or adequate health and safety protections. More importantly, we don’t have rights needed to stop top UC management and Regents from cutting into our research grants to fund executive pay increases and pet projects,” said Jordan Brocious, a Physics RA at UC Irvine and officer with the UC Student-Workers Union – UAW.

Governor Brown said in his veto message that “given the current stresses facing the state and its universities, now is not the time” to give basic rights to RAs. “The Governor has it wrong on RAs and state funding. RAs work side-by-side with postdoctoral and staff researchers in labs to help bring increasing amounts of private and federal revenue to UC – more than $5 billion in funds last year – at a time when state funding has been cut. 85% of RAs are funded by private and federal grants. Despite the revenue they generate, RAs are the only workers left in UC labs that are not allowed to choose for themselves whether to form a union,” said Anke Schennink, a Postdoctoral Researcher in Animal Science at UC Davis and Financial Secretary for the Postdoctoral Researchers union, UAW Local 5810.
“Union rights for RAs would let RAs choose whether to form a union. Neither, the Governor, nor faculty, nor UC management should deny RAs the freedom to make this choice for themselves. The option to unionize would provide a framework for stronger, more balanced mentor-mentee relationships between faculty and graduate students while also recognizing that some RA positions lie outside such relationships,” added Bob Meister, President of the Council of UC Faculty Associations  and Professor History of Consciousness and Political and Social Thought at UC Santa Cruz.
“There has never been a more urgent time to universalize freedom of association and union rights at UC — including for UC’s 14,000 RAs. When we can form unions, students and workers are the strongest defense against the excessive executive pay and waste that give many voters pause about supporting Proposition 30,” added Angelica Salceda, a UC Berkeley law student and President of the UC Student Association. “Instead, Governor Brown’s veto of SB 259 demoralizes all of us who are working day and night with him to pass Proposition 30. Governor Brown should undo the damage by reaching out to students and workers now about how to pass and implement union rights for RAs as soon as possible.”
“Governor Brown’s veto of union rights for RAs condones UC management putting personal gain ahead of UC’s mission. UC’s students and workers will stand together until RAs win their rights and we can all put teaching, research, and quality care first,” said Kathryn Lybarger, a gardener and President of AFSCME 3299, whose members care for students on UC campuses and patients in UC hospitals.
The UC Student Association, the six unions of the UC Union Coalition, and the Council of UC Faculty Associations called for immediate reintroduction and approval of the legislation. They also pledged to put the issue at the forefront of increasing campus activism to stop privatization, cuts to healthcare and retirement security, tuition hikes, excessive executive pay, and the centralization of power pushed by UC Regents and executives with close ties to Wall Street. Students, faculty, and workers plan to converge for massive Occupy the Regents protests at the Nov. 13-15 meeting of the UC Regents. On the one-year anniversary of protests at Berkeley and Davis that captured international attention, activists will demand feasible policy changes within UC that could make Wall St., UC executives, and the super rich pay for rolling back tuition hikes and cuts.