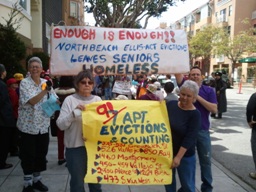 On April 11, I described why Urban Green Investments issuance of an Ellis eviction notice to 97-year old Mary Phillips compelled San Francisco to create disincentives for future evictions of longterm elderly tenants. Supervisors Yee, Kim, and Chiu have introduced such legislation, which is backed by Supervisors Alvalos, Campos, and Mar and which could ultimately get eight or nine votes. And Phillips is not the only elderly tenant whose home Urban Green is trying to steal: it has issued Ellis eviction notices for a six unit building at 1070 Post Street that includes a 95-year old tenant who has lived in his home since 1964, and another in his eighties who has resided in his home for 53 years. The condo conversion reform measure before the Board next week has become a defining test of San Francisco’s priorities, and the Board has a golden opportunity to put the needs of residents ahead of speculator profits.

The real estate industry must be gnashing its teeth over the actions of Urban Green Investments, whose callous attacks on elderly and vulnerable tenants have become the poster child for a condo conversion moratorium. Since the moratorium is linked to opening conversions to over 2000 TIC owners, the Supervisors have taken care of this group while creating a disincentive to the speculative ventures of Urban Green and a very small subset of the real estate industry.

Urban Green’s entire investment strategy is based on increasing rental income by either buying out longterm tenants (accompanying their offers with thinly-veiled threats) or, if this fails, invoking the Ellis Act. We can see their strategy at work at 1070 Post.

Urban Green sent a letter to tenants of 1070 Post on November 30, 2012 announcing its purchase of the property. This was followed in December by a letter to each tenant offering them $30,000 to move; the letter made it clear that each offer was conditional on the acceptance by all (the identical strategy used by speculators in Aravind Adiga’s Mumbai—based novel, The Last Tower, published in August 2012).

One of the tenants at 1070 Post is a law student, and he tried to negotiate a higher buyout amount for all. This effort failed, and Urban Green filed its Ellis eviction notices with the Rent Board in early February.

This eviction occurred as many believed that the Wiener-Farrell legislation would not only immediately open the door to all TIC owners seeking to convert to condos, but also change the thirty-year political dynamic around the issue. So while city law prevented a condo conversion when the 1070 Post Ellis notices were issued (Ellised buildings are not eligible for the lottery), the overturning of this and other restrictions was viewed as being only a matter of time.

In addition to housing a 95-year old who has lived in his home for 49 years and a tenant in his eighties who has lived there since 1960, all five occupied units at 1070 Post have a protected tenant under state law. Three units include a tenant with a disability.

Urban Green usually tries to first displace tenants on non-Ellis grounds. At 1070 Post, it issued a three-day notice in March to evict two tenants for allegedly having an unauthorized roommate. While the tenants had told the prior owner about the roommate, they did not want to jeopardize their tenancy over the issue so the roommate left.

I previously described how at 49-53 Guerrero Street Urban Green combined harassment with the failure to make repairs as its “alternative” to issuing Ellis notices. They are relentless in trying to get tenants out because they have obtained financing from lenders based on implementing this strategy.

Board to Vote May 7

At last Monday’s Land Use hearing, it was clear that the vast majority of TIC owners are thrilled with the compromise legislation and that the remaining opponents are speculators and realtors. Among the handful of speakers against the measure was a TIC owner who admitted owning TIC’s in two buildings—-undermining the Wiener-Farrell claim that they only care about helping “homeowners.”

Urban Green Investments has a huge portfolio, and is not the only serial real estate speculator displacing longterm tenants and eliminating affordable rental housing from the market. That’s why a longterm moratorium on future conversions is such an important disincentive for eviction, and why it’s so important that the Board withstand pressure to weaken the compromise.

And let’s be very clear that this legislation is a compromise. It is not a sweeping tenant victory that will stop evictions completely. Plan C and its predecessor groups have sought to bypass the 200 annual condo limit since the 1980’s, and consistently failed legislatively and at the ballot box. Now they are on the verge of getting over 2000 TICS out of the lottery, which they long claimed was their chief goal.

Speculators saw a wide-open real estate world opening up after the November 2012 elections, and a tenant movement in decline.But because the legislative compromise increases protections for tenants not currently facing eviction, speculators have failed to shift the political climate around condo conversions in their favor.

As the many large turnouts have shown, the city’s tenant activists have been reignited by the prospect of unlimited condo conversions in San Francisco. Our elected officials understand better than only a few months ago why no city should be identified with the displacement of 97 or 95-year old residents from their homes, and why the compromise legislation must pass without material changes.

Wiener and Farrell are the only two supervisors publicly opposing the compromise measure It comes to a Board vote on May 7.